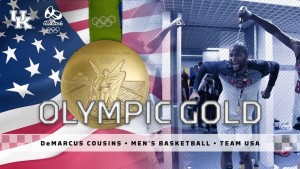 RIO DE JANEIRO – Snatching up what seemed like every rebound, former Wildcat DeMarcus Cousins also hauled in the first Olympic gold medal of his career with a strong performance Sunday in the championship game of the 2016 Olympics.

With a gold medal on the line, Cousins saved his best for last for USA Basketball. Coming off the bench for a third straight game, Cousins set the tempo early by dominating the paint, sparking Team USA to a 40-15 first-half run, and ultimately to a 96-66 rout of Serbia.

Cousins played as well as he has all tournament, posting 13 points and a game-high 15 rebounds for his third double-digit scoring game of the Olympics. He had 11 points and 12 rebounds by halftime.

The 6-foot-11 forward, who was drafted fifth overall in 2010 after a sensational freshman season at Kentucky, averaged 9.1 points and 5.8 rebounds in eight games at the Olympics. He shot 61.4 percent from the floor, only shooting less than 50 percent in one game during the run.

Cousins is the 10th Wildcat all-time to compete in the Olympics and win a gold medal (not counting Sam Bowie, who was awarded a medal by President Jimmy Carter after the United States boycotted the 1980 Moscow Games), tied with North Carolina and UCLA for the most among all colleges. Cousins is also the third former UK player in a row to win a gold medal. Anthony Davis captured the gold at the last Olympics, in 2012, and Tayshaun Prince was a part of the 2008 gold-medal team.

“Congratulations to USA Basketball on another gold medal and to our own DeMarcus Cousins,” Calipari said. “DeMarcus continues to get better and better and has become one of the best big men in our game. I know how badly he wanted this opportunity and this gold medal. I couldn’t be more proud of him.”

Though it’s the first Olympic gold medal of his career, it isn’t Cousins’ first major success story with Team USA. He previously helped USA Basketball to a gold medal at the 2014 FIBA World Cup, averaging 9.6 points and 5.6 rebounds while shooting a team-high 70.2 percent from the field during that nine-game run.

Cousins is entering the prime of his NBA career. Just a few months ago he was named to the All-NBA Second Team for a second straight year after averaging career highs in both points per game (26.9) and rebounds per game (10.2). The two-time NBA All-Star is just the fourth player in UK’s history to earn multiple All-NBA honors in a career.

In addition to ranking fourth in the NBA in scoring during the 2015-16 season, Cousins was among the league leaders in rebounding (fifth), double-doubles (sixth), blocks (21st) and steals (22nd).

Cousins was a double-double machine during his lone season at Kentucky in 2009-10. His 20 double-doubles are tied for the most in the Calipari era with Davis. He averaged 15.1 points, 9.9 rebounds and led the Wildcats with 67 blocks in helping UK to a 35-3 record, Southeastern Conference regular-season and tournament championships, and an appearance in the Elite Eight.