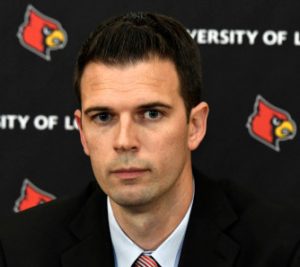 Louisville, KY – Each day now Louisville Cardinals fans wake up with the question of what will happen to their program that day.  Today was a quiet day for once as the only news that came out was the naming of their interim coach.  Former Cardinal, David Padgett, was named U of L’s new interim coach.

The news was no surprise as most people as of Thursday felt he had the best chance to get the job.  Not only were many fans hoping for Padgett, but more importantly, the players.

The news comes two days after Rick Pitino was place on unpaid administrative lead and a day after ABC News confirmed that Pitino is Coach-2 in the FBI investigation meaning he had an integral role in the recruitment of 5-star recruit Brian Bowen.  The FBI documents show two Louisville coaches working with Adidas to funnel $100,000 to Bowen.

Even with the loss of Bowen, the Cardinals will be a top 15 team this season.  Coach Padgett has a long road ahead, but can help ease the emotions of U of L fans by leading the Cardinals to a successful season.