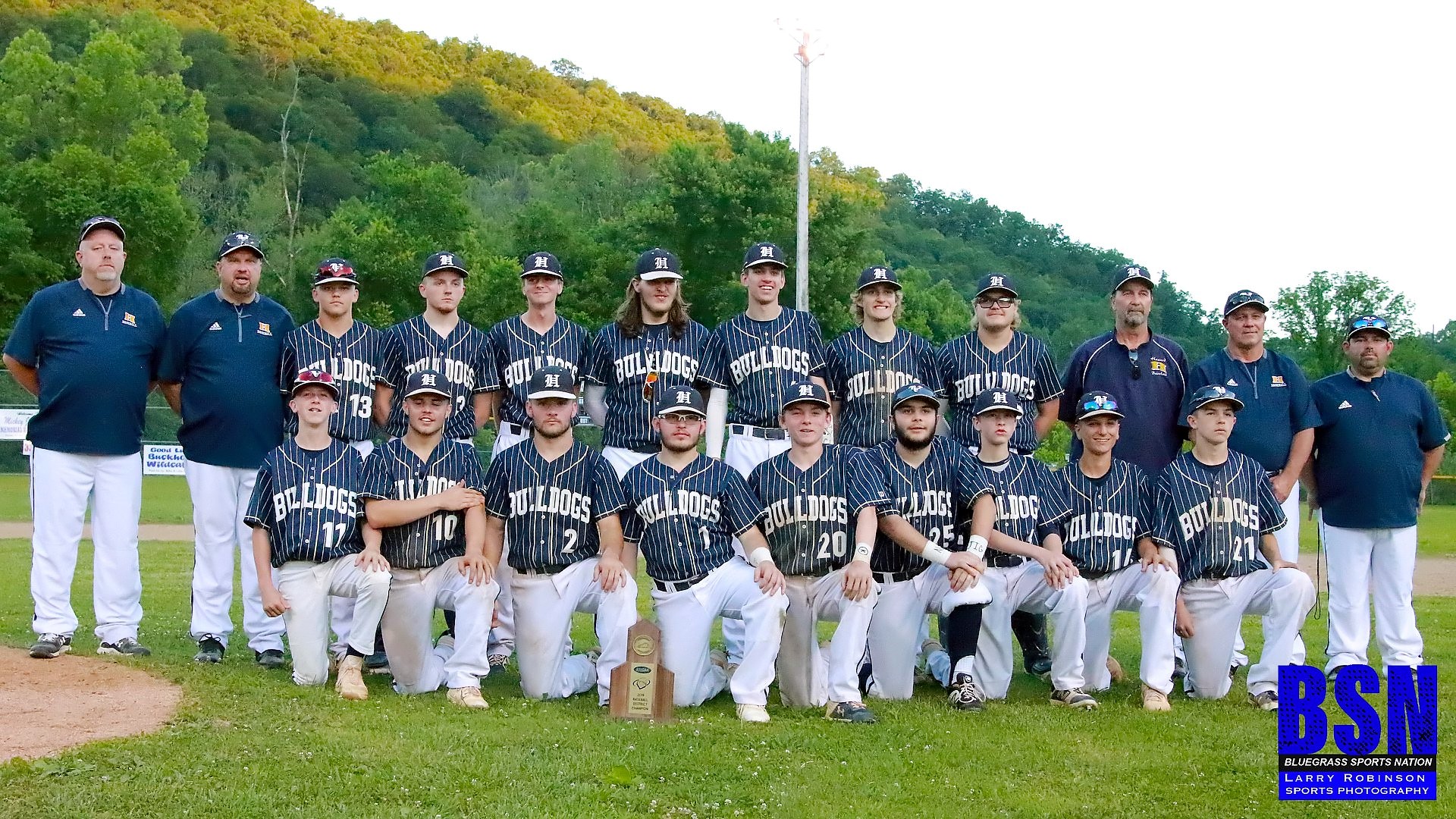 Where have we seen this match up before? For the past several years, save 2015 when they met in the first round of the district, the Perry Central Commodores and Hazard Bulldogs have squared off and went toe to toe for the District Championship. In fact, you have to go all the way back to 2007 for a 54th District Tournament that didn’t feature at least one round of the classic match-up (Leslie defeated Hazard 5-12 that year in the opening round). The 2019 game didn’t disappoint and as usual, both put on a show worth more than the price of admission.

Both teams started slow. Even though there are few teams in the state as familiar with each other, there is always a feeling out period with the two. Bailey Blair worked an efficient 6 pitch, top of the first, getting the Dores to ground out twice and fly out to center field. In the bottom of the 1st the Bulldogs threatened on a lead off error that left Andy Baker standing on second. The Bulldogs were unable to plate the run, and the first came to an end tied at 0-0. The second inning was as uneventful as the first, seeing only one base runner as Hazard’s Jarrett Napier singled into right-center field and was stranded at the end of the inning.

As the third inning started, the PCC offense began to get rolling. Dawson Kersey singled on a ball in the hole at short. Blair then worked fast getting a strikeout and fly ball to move to two outs. On the first pitch to the next batter, Ryan Couch, Kersey advanced to second on a wild pitch and and Couch then drove him home on a ball back up the middle on the following offering from Blair. After a HBP, the Commodores were again threatening with a man in scoring position when David Elkins hit a sharp single to right field to score Couch. The Bulldogs escaped further damage in the inning by getting a pop fly during the next at bat and holding the score at 2-0 going to the bottom of the third. The Bulldog bats woke up in the third inning as well. After Couch got the first two outs by way of strikeout and a line out to short, Kyle Johnson stepped to the plate to get a clean single back up the middle. Johnson was then able to score when Trajon Campbell tripled into the right field corner. Bulldog catcher Dalton Baker then came to the plate and worked the count full before getting a single through the infield into left that scored Campbell tying the game at 2-2. Blair then reached on a single to right, allowing courtesy runner Hank Pelfrey to move to third. After a Blair stolen base, freshman Andrew Ford came up with a big single up the middle scoring Pelfrey and Blair and putting the Bulldogs up 4-2. Jarrett Napier then came to the plate and singled to right moving Ford to third. The Commodores were able to get out of the inning as they got Napier in a run down in a first and third situation as he was trying to score Ford from third.

The fourth inning didn’t see the offense for the Commodores slow down. Hunter Pigman came to the plate and took the 1-0 offering from Blair back up the middle to get the inning started. Commodore catcher Braden Cottongame was then HBP and courtesy ran for by Troy Sharp. Commodore first baseman Kersey moved the runners to second and third on the next at bat with a sacrifice bunt. Dustin Fields then hit a sharp grounder to first that looked as though it would score Pigman until Hazard first baseman Campbell stepped up and threw a strike to catcher Dalton Baker who put the tag on Pigman before he could score. After Fields advance to second on the previous fielder’s choice, Zack Gayheart drove both he and Sharp in to tie the game 4-4. The Bulldogs were able to stop the onslaught, but were unable to regain the lead in the bottom of the 4th and the game remained tied.

The fifth inning passed with only one base runner, as PCC DH Mason MacAlarnis reached on an error. Blair was able to work out of the inning with a couple of fly balls and a ground out.

Couch was then able to shut down the Bulldog offense and move to the 6th with a couple of ground outs and a fly ball. As the sixth started, Bulldog pitcher Blair looked as though he was gaining strength as the game progressed. Blair worked a 1,2,3 inning by getting a ground out and two strikeouts. The bottom of the sixth was the big inning for the Dogs as they would plate 5 runs. Blair led the inning off by reaching via an error. Blair was able to score two pitches later as Ford hit a stand up double to the left field fence. After a dropped third strike and walk loaded the bases, Couch was able to start the 1-2-3 double play to save a run and record the first two outs of the inning. Andy Baker was then intentionally walked to set up the force at any base. The walk brought Kyle Johnson to the plate who got the 3-0 green light from Coach John Meehan and took the Couch offering to the left field fence, clearing the bases and giving the Bulldogs a commanding 8-4 lead. After a PCC pitching change and walk, Dalton Baker stepped back up to the plate and produced a double of his own scoring Johnson to set the final Bulldog tally at 9. A Bulldog line out ended the big inning.

The Commodores were not done, however. After a 2 pitch pop up and 1 out, the Bulldogs seemed like they were going to cruise through the inning. Then after a walk, single, and an error to load the bases, the Bulldogs brought in Jarrett Napier to try and close out the game. Mason MacAlarnis took the 3-2 offering from Napier back up the middle and scored Couch and Spurlock to bring the score to 9-6. That would be the last score of the night, though, as Napier was able to get a pop foul out to the catcher and a ground out to end the game.

The Bulldogs improve their record to 25-7 and the Commodores drop to 20-15. Both teams will make a strong run in the region, though. In what could be the most wide open 14th Region Tournament in recent memory, the Bulldogs and Commodores could both make their way back to yet another regional final. There are some obstacles in the way of that happening. You have a Nate Skidmore led Powell County team that just shut out Estill County 5-0, and has come on strong at the end of the season. And what winner wants to draw Estill County to start tournament play? And lets not forget to mention Knott who just won the 53rd District Title over Letcher Central in convincing fashion, 12-2. And lastly, the team that could knock off one of the big names in the region on any given night, Breathitt County who will play Jackson City on Tuesday the 21st. It is going to be a fun and wild region this year. Will Hazard continue their recent dominance, or will there be a new champ crowned? We’ll find out on May 28th which is set as the 14th Regional Final game. The 14th Region draw will take place on Thursday, May 23rd. The opening 4 games will all be played on Saturday, May 25th and Monday, May 27 will be the semi-finals. Keeping checking with Bluegrass Sports Nations to stay up to date with the entire 14th Region Tournament.

Thanks to our sponsors for the 54th District Baseball Tournament 1st Trust Bank of Hazard and the Appalachian Regional Healthcare!