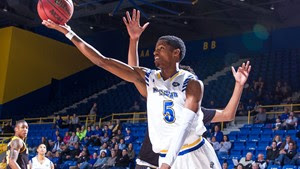 With the loss, the Eagles have now lost six straight and their record falls to 2-6 on the year.

“We told our guys before the game that there’s two places that this team can beat you and that’s from behind the line, both the three-point line and the free throw line. So we really need to press up, we really have to have high hands, we have to rotate to shooters, and we have to make them drive the ball. Obviously, we did not stick to that game plan and that’s an adjustment that we’re going to have to make,” said interim head coach Preston Spradlin. “Give them credit, they got it going early, but I thought that we allowed them to really get their confidence going early. When you do that with a good shooting team, they’re going to take advantage of it like they did tonight.”

Lipscomb shot 9-of-16 from three-point range in the first half as Morehead State went into the locker room at halftime trailing, 43-40.

The Bisons were led by sophomore Garrison Mathews, who finished the first half with 20 points on 6-of-8 shooting from beyond the arc.

Just three minutes later, Moon answered by knocking down back-to-back threes to trim the lead to six at 58-52.

With 8:36 to go, Moon’s layup then cut the Lipscomb lead to four points at 66-62 and he had a chance to cut it to one on the next possession, but his three-pointer rimmed in and out.

Lipscomb then hit two free throws on the other end and the Eagles didn’t get closer than six points the rest of the way.

“We needed to be the hungrier team tonight, and at times I thought we were, but for 40 minutes I don’t think we were and that’s something we have to find within ourselves and make sure that we bring every time out,” said Spradlin.

Moon finished with 12 points in the second half and 18 for the game. He shot 6-of-19 from the floor and 4-of-13 from three-point range, while pulling down a season-high six rebounds.

Dicent had 13 points in the second half and 18 for the game, while shooting 6-of-14 and 3-of-7 from deep. He also added six assists, three rebounds, and two blocks.

Morehead State is back in action on Tuesday night at Eastern Washington. Tip-off is set for 9 p.m. ET.