District 7 Belongs to the Bobcats 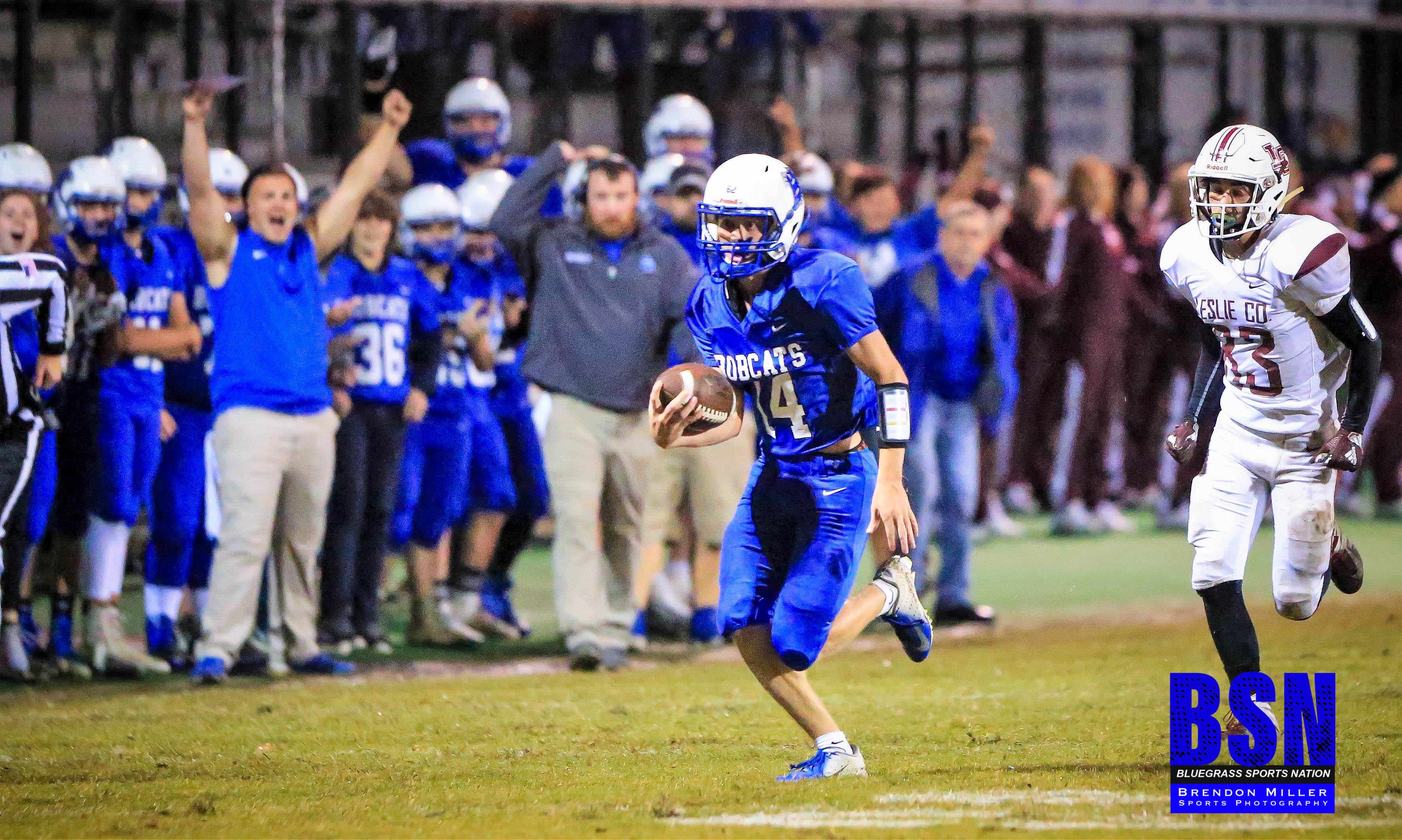 From the opening kickoff, the Bobcats dominated. Before you could blink your eyes, the Bobcats had pounced on Leslie County. After a muffed kick off by the Eagles that the Bobcats recovered on the 12-yard line, Charles Collins scampered to the end zone putting the Bobcats up 7-0 after Lane Weddle booted the extra point through the up rights.

Breathitt’s defense showed their muscle forcing a three and out on their first possession of the game. The Bobcat offense utilized a no huddle a pproach on their next possession as they drove 68 yards for their second touchdown of the game. Again, it was Collins who took the hand off and busted loose for a 43-yard touchdown run. The extra point attempt was no good and the Bobcats now led 13-0 midway through the 1st quarter.

Weddle made up for it on the next defensive possession as he intercepted a pass and returned it deep into Eagle’s territory. After an unsportsmanlike conduct penalty, Breathitt’s offense was set up inside the 5-yard line. Braxton O’Hara did the rest as he punched it in for Breathitt’s 3rd touchdown of the 1st quarter. bO’Hara also converted on the two-point conversion putting the Bobcats up 21-0.

Breathitt’s defensive back Jacob Noble picked off Leslie County’s pass and sprinted down the right sideline for another score. The extra point was no good and the Bobcats lead was now 27-0. Breathitt’s defense forced another 3 and out forcing Leslie County to punt. Jaylen Turner and Brandyn Slaughter put the game on ice as they connected on a 70-yard bomb. Breathitt at the end of the 1st quarter of play led 35-0. Senior tailback Dalton Manns placed the game under a running clock when he waltzed into the endzone from 9 yards out. Breathitt ended the half up 50-0.

9 games, 9 running clocks, 9 wins= 2A District 7 Champs. Breathitt ended the game with a 56-6 victory. They have steam rolled their opponents and have left absolutely no doubt who the better team is.

This team continues to improve and shows characteristics of a real championship contender. They are coachable, disciplined, and humble. They refuse to be satisfied and continue to work. This team only knows one speed…. full throttle. Breathitt has outscored their opponents 447-68. Breathitt has allowed the least amount of points of any 2A school while scoring the most. Full throttle may be an understatement. While Breathitt captured the 2A District 7 crown, they have much bigger goals. Next step is completing the regular season unblemished.

The Breathitt Bobcats will cap off their regular season next week when 3A Pike County Central comes to the River Bank. PCC has only lost 2 games, 12-7 to Shelby Valley (8-2), and 55-14 to power house Belfry (6-2).