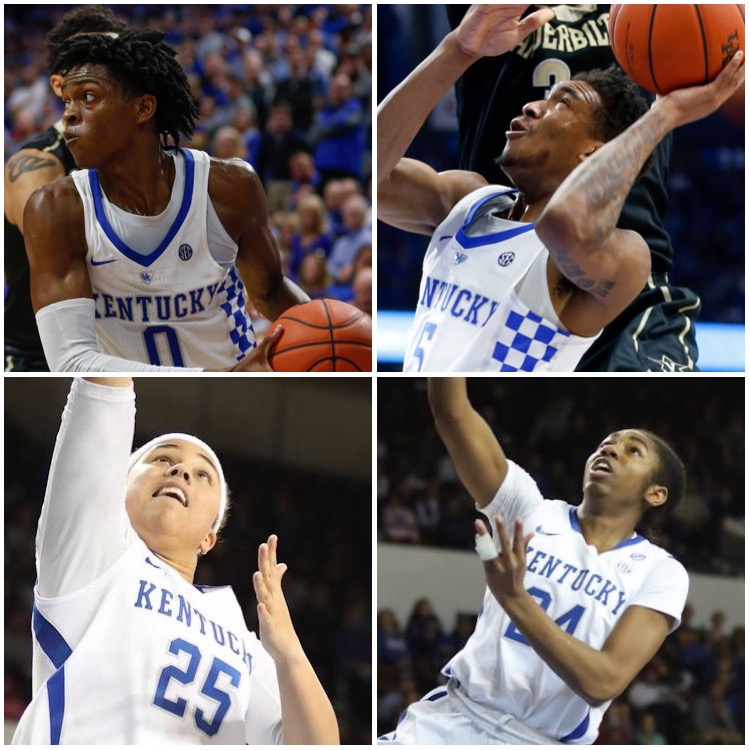 What do Batman and Robin, John Wall and Eric Bledsoe, and Tyler Ulis and Jamal Murray have in common? They were dynamic duos who, when the chips were down, always found a way to beat the bad guys. To that esteemed group, I’m going to add two more heroic pairs of all-star backcourt tandems—UK guard combos that arguably could be the best in the history of their respective programs.

Call me crazy, but in terms of sheer talent, it would be hard to come up with a better backcourt than Kentucky’s De’Aaron Fox and Malik Monk. Both were highly recruited, heralded McDonald’s All-Americans coming out of high school targeted for future superstardom. At least statistically to date, their freshman season at UK has been a smashing success. They’ve led the Wildcats to a 26-5 record and a regular season conference championship. They were both recently named to the USA Today All-American team. And yet, many would agree that there’s just something still missing from their on-court performances so far that would coronate them as the greatest of all time.

Coach John Calipari knew full well that the two personalities would complement each other even as he was recruiting them both. “Again, why this works here is because they all recruit each other to come here,” he explained. “So now that means they liked each other before they got here…You know, the AAU stuff and the national games and how they do this, they all know each other from when they’re 8-year-olds until they go to college.”

De’Aaron and Malik may have liked and known each other for a long time prior to coming to Kentucky, but they’ve yet to demonstrate a consistent level of gamesmanship worthy of championship recognition while donning the Blue and White. All of BBN is still waiting for that string of games unveiling that inexplicable personal chemistry that both coach and fans were initially expecting—where the dynamic wildcat duo zip crisp passes, throw lob dunks, and feed off each other with the extra sensory perception of twins separated at birth.

Here’s what De’Aaron had to say when I asked him about his chemistry with Malik. “Man, we’re like brothers on and off the court,” said the lightning-fast point guard. “We can say anything to each other. It’s not personal, but we just want the best for each other. It’s honestly been like that every game.” Malik felt likewise when asked about De’Aaron. “I think we’re the best backcourt in the country,” he opined.

Let’s compare this UK backcourt tandem to the ones in my lifetime that have won the last few national championships. If asked to choose between the 2012 combo of Marquis Teague and Doron Lamb, it’s not even close. I’ll take Fox and Monk every day of the week. How about Jeff Sheppard and Wayne Turner in 1998, Anthony Epps and Tony Delk in 1996, or Kyle Macy and Truman Claytor in 1978? Those choices are a bit more difficult, but I’d still pick De’Aaron and Malik over any of them. My point being that talent wise, it’d be hard to top these two. The one remaining mystery ingredient is that extra bit of personal chemistry between them as they head into post-season play.

That degree of personal chemistry certainly hasn’t been missing from the current UK Women’s Basketball guard tandem of Makayla Epps and Taylor Murray. The senior Epps and sophomore Murray have teamed up to propel the Wildcats to an unexpectedly successful season to date. Murray’s speed and Epps’ toughness have become the Yin and Yang, the Frick and Frack, the Tweedledum and Tweedledee of Matthew Mitchell’s redemption from this past summer’s team dissent and desertion. Not since the heyday of Lea Wise and Patty Jo Hedges has Kentucky Women’s Basketball experienced such a harmonious and effective dynamic duo. Murray’s recent neck injury was a devastating blow to the Wildcat’s SEC tournament hopes. Fortunately, it looks as if she’ll be back in plenty of time for the NCAA tournament run.

Coach Mitchell explained it this way to me when I asked him if he was surprised at how quickly Makayla and Taylor were able to mesh together this year. “Well, I am not surprised at really anything that this group has been able to do because of the strength of their character and how much they really care about each other,” he said proudly. “I think both of those kids, Makayla and Taylor, had a strong desire to win and compete this year and to be the very best we can be and they are doing whatever is necessary to get that done. We are not perfect and have flaws, but at the end of the day, they really work hard for each other.”

Makayla spoke glowingly when asked about her backcourt mate. “Her confidence has skyrocketed through the roof,” she said. “She wants to do well for me and Evelyn (Akhator). She told me at the end of last year that she was going to send me out in the best way possible personally, and I love her for that.”

These are golden times when talking about talented guard tandems in the proud and storied history of the University of Kentucky Basketball Programs. As fans, we’ve been spoiled. Through all the ups and downs of a typical season, it’s easy to start nitpicking player performances and taking talent for granted. Everyone claims that come tournament time, however, good guard play makes for championship teams. A nice, deep tournament run–from De’Aaron and Malik, or Taylor and Makayla–would cement their legacies as the most outstanding dynamic duos of all time. Like Butch Cassidy and the Sundance Kid, Thelma and Louise, and Calvin and Hobbes, they’re legends in the making. All that’s missing is a championship banner.