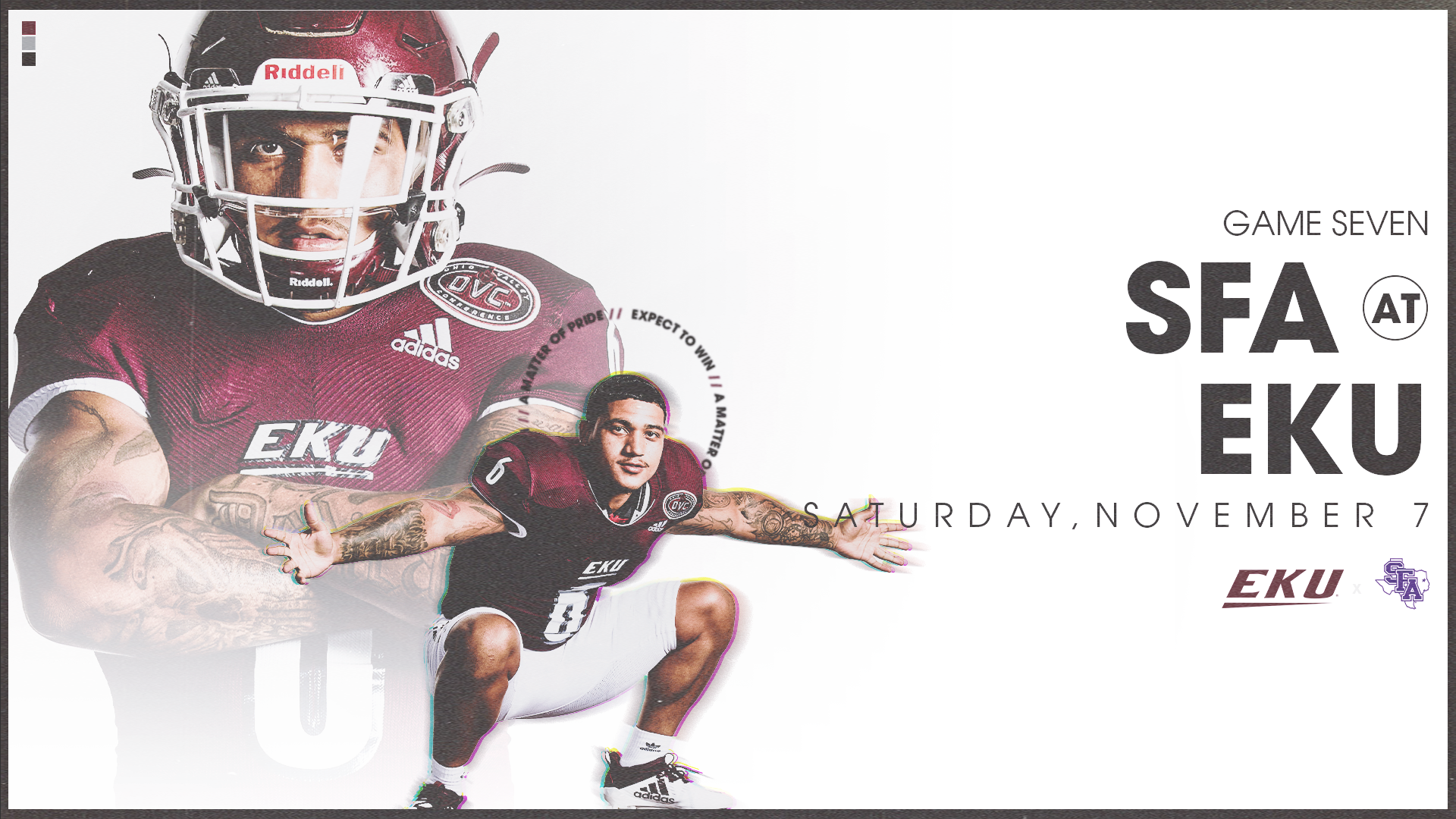 The Military Appreciation Game will kick off at 3 p.m.  The game will air live on ESPN3.

The live radio broadcast of the game is available in the Richmond area on WCYO 100.7 FM, and can be heard worldwide on EKUSports.com.

The EKU Band will perform on the field following the end of the game.

–  This is the first meeting between the two football programs.

–  Eastern Kentucky is 2-4 after a thrilling, come from behind, last-second win over No. 11 Central Arkansas on Oct. 24 at Roy Kidd Stadium.

–  Quarterback Dakota Allen, who came on to play late in the second quarter, led the Colonels on an 8-play, 77-yard game-winning scoring drive with just 1:21 left in the game against Central Arkansas.

–  Jacquez Jones caught six passes for 136 yards in EKU’s win over Central Arkansas.  That is an average of 23 yards per catch.

–  The Colonels are averaging 33 points per game against FCS teams in 2020.

–  Stephen F. Austin is 4-3 this season and riding a four-game winning streak.  The Lumberjacks are coming off a 64-7 win over Division II Western Colorado.  SFA has only played one game against an FCS team this season, a 35-22 overtime win against Abilene Christian on Oct. 24.

–  The Lumberjacks scored 37 points in the first quarter against Western Colorado and led 58-0 at halftime.

–  Quarterback Trae Self threw for 170 yards and two touchdowns on nine completions in limited action against Western Colorado.  Tre’ Henderson rushed for 75 yards and scored two touchdowns.  Remi Simmons caught four passes for 143 yards and had one touchdown.

–  Stephen F. Austin averages 28 points per game and only allows 22 per game.  The Lumberjacks average 376 yards of offense per game, with 258 coming through the air and 119 on the ground.  SFA has forced 17 turnovers while giving the ball away just eight times.

–  For the season, Self has thrown for 1,511 yards and 11 touchdowns while completing 61 percent of his passes.  Da’Leon Ward leads the team with 265 rushing yards and three touchdowns.  Xavier Gipson has a team-best 624 receiving yards and six touchdown receptions.

It doesn’t matter if you are a Colonel Club member, a student, a Colonel fan or a fan of the opponent, there is plenty of information below that will help make your game day experience the best it can be …

• All patrons will be required to wear facemask when traveling through the parking lots and while socializing.

• No shuttle services from the parking lots to the stadium will be provided during the 2020 season.

• Upon entry into Roy Kidd Stadium, fans and staff will be temperature screened using an infrared thermometer prior to entry.

• Hand sanitization stations will be located in the stadium.

• Signage will be displayed in common areas to assist with physical distancing.

• A comprehensive in-game custodial cleaning plan will include restrooms, team spaces, premium spaces, high-traffic areas and protocol to dispatch custodial services to any area of the stadium for specific needs

2 p.m. – Concession sales inside the stadium (including alcohol) begins

Ticket Office
Physical tickets will not be sold at Roy Kidd Stadium on the day of the game; however, tickets will be available through EKUSports.com.

EKU Football Parking Lot Locations
• There are numerous and convenient parking options for all fans on game day at Roy Kidd Stadium.

• Colonel Club Lot (Lot K) – Located in the Alumni Coliseum Lower and Upper lots across the street from Roy Kidd Stadium, Colonel Club season ticket members have exclusive access to both of these lots with their valid Colonel Club parking pass.  Parking passes must be displayed in vehicles at all times.

• RV Zone – EKU is proud to continue offering the RV Zone, designed to provide football fans a unique and unforgettable tailgating experience.  Located next to the Olympic Sports Training Center lot and just a few steps away from the Roy Kidd Stadium entrance, the RV Zone is available for both single game and full season passes.  Single game passes start at $75 per game, which include two (2) general admission tickets for the game.  The EKU RV Zone will open at 6 p.m. the Friday before game day and will close at 3:00 p.m. the Sunday following game day.  RVs must be in the RV Zone by 9 p.m. on the night before a home game.  There will be no same-day parking for the RV Zone on the day of the game.  All attendees in the RV Zone are asked to maintain the 6-foot social distancing standard and are required to wear facemasks.  Reservations for the RV Zone are required at least three (3) days in advance and your pass may be reserved by calling (859) 622-7128.

EKU Football Parking Regulations
• Parking is permitted only in designated spaces.  Parking on islands, medians or berms is prohibited.
• Parking spaces are available on a first come, first serve basis and cannot be saved.
• No tailgating is allowed this season.
• No personal motorized carts are allowed.

• Protect your belongings, EKU will not assume responsibility for lost or stolen items.

Student Section
Student seating is located in sections A and B.  Students may also sit on the hill in the north end zone.  Students should enter the stadium through Gate 1.  Students need their official school ID out and ready to be allowed admittance to the game.

Alcohol Sales
Alcohol sales (beer and wine) are located on the east side of Roy Kidd Stadium and on the northern end of the main concourse inside the Begley Building:
• Sales begin at 2 p.m.

• Sales continue through the third quarter.  No sales in the fourth quarter or overtime.
• Fans will be limited to two (2) beverages per transaction.

• Purchase can be made by fans 21 years and older only.
• Must be consumed in clear plastic cup.
• Cash and credit cards accepted.

ADA Accessible Ticket Information
• The ADA accessible seating area at Roy Kidd Stadium in Section J and R of the east side of the stadium.
• Patrons must purchase a general admission ticket to watch the game from this area.
• Patrons are welcome to have a companion sit with them in the area.  Folding chairs are provided for any guests that need them.
• The ADA accessible restrooms are located on the concourse of the east side of the stadium.  The Moberly building also provides accessible restrooms.
• ADA accessible parking is available in the Moberly Lot past the Stadium off Roy and Sue Kidd Way on the right from the Bypass.

• The main accessible gate (Moberly Gate) is between the Moberly building and the Olympic Sports Training Center.

COVERAGE
BSN will be at the game to bring you pictures of the Colonels.