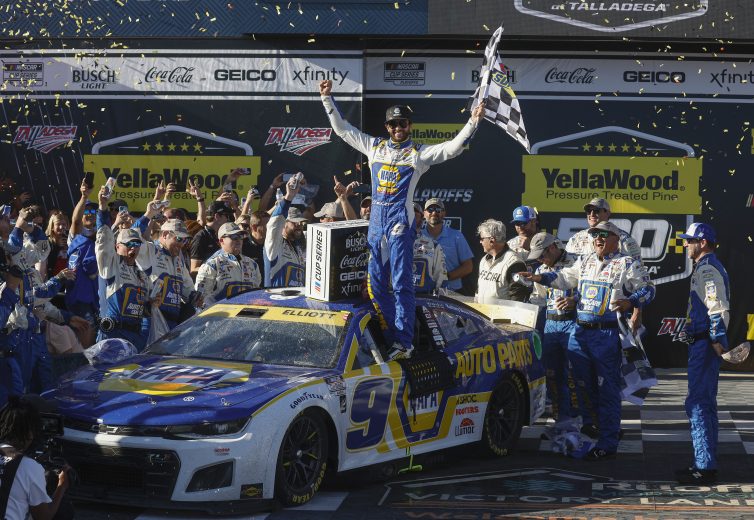 Chase Elliott outdueled Ryan Blaney on the final lap to collect his fifth victory of the 2022 NASCAR Cup Season.

The NASCAR Cup Series round of 12 playoff race invaded Talladega 2.66 mile Superspeedway for the YELLAWOODS 500.  Christopher Bell and Kyle Larson set the front row for 188 laps of stock car racing in central Alabama.

1 to go in stage one,  Denny Hamlin applied a huge block on  Chase Elliott.  Ryan Blaney had a huge run off the outside of turn four to challenge Denny Hamlin, and win Stage 1!

On Lap 104, Tyler Reddick cycled to the race lead and set sights for checkers.

8 to go in Stage 2, Kyle Larson led the field on the inside lane, and pull even with Tyler Reddick.

With only one circuit to go, Tyler Reddick fought back for the lead on the outside of turn one, and got squirrely and forfeited his spot.

This opens the door for Chase Elliott to slip out of line and contest Kyle Larson for valuable Stage 2 points.

Ryan Blaney found himself fighting near the front of the pack for a majority of the final section of the 500-mile event and his No. 12 Penske Ford is pronounced to be the car to contend with.

As 26 laps remain, the final scheduled green flag pit cycle is complete.  Ryan Blaney recycled back to the lead with Keselowski on his bumper. Unfortunately, NASCAR Officials served a Pass-Through penalty for speeding, as veterans Brad Keselowski and Kevin Harvick paid their fine.

18 to go, Michael McDowell drafted Erik Jones to run with the lead pack in turn three.  Ryan Blaney regained the lead and throws a huge block on an approaching Ross Chastain to remain at the post.

With seven to go, Daniel Hemric stalled his car at the edge of the pit lane to invite Nascar’s yellow flag.

A bump from Michael McDowell allowed Ryan Blaney to excel past Erik Jones for the lead following the (Hemric’s) caution’s final restart.

On the last lap, it appeared as though Chase Elliott was descending in the wrong direction, but help from Erik Jones’ Bump draft maneuver was just enough momentum to bolt the 2019 Cup Champ past friend Ryan Blaney on the back stretch.

Chase Elliott threw blocks in five lanes through the tri-oval protecting his real-estate.

Chase Elliott Talladega Victory punches his ticket into the Round of 8 of the playoffs regardless of his performance at the Charlotte Roval next weekend.

The NASCAR Cup Series Playoffs returns Sunday to the Charlotte Motor Speedway for the final road-course event of the season.

The Roval the Bank of America ROVAL 400

Kyle Larson is the defending “the Bank of America ROVAL 400” event winner.

Ryan Blaney won the inaugural race and Chase Elliott is a two-time winner there as well (2019 and 2020) at the Charlotte Roval.