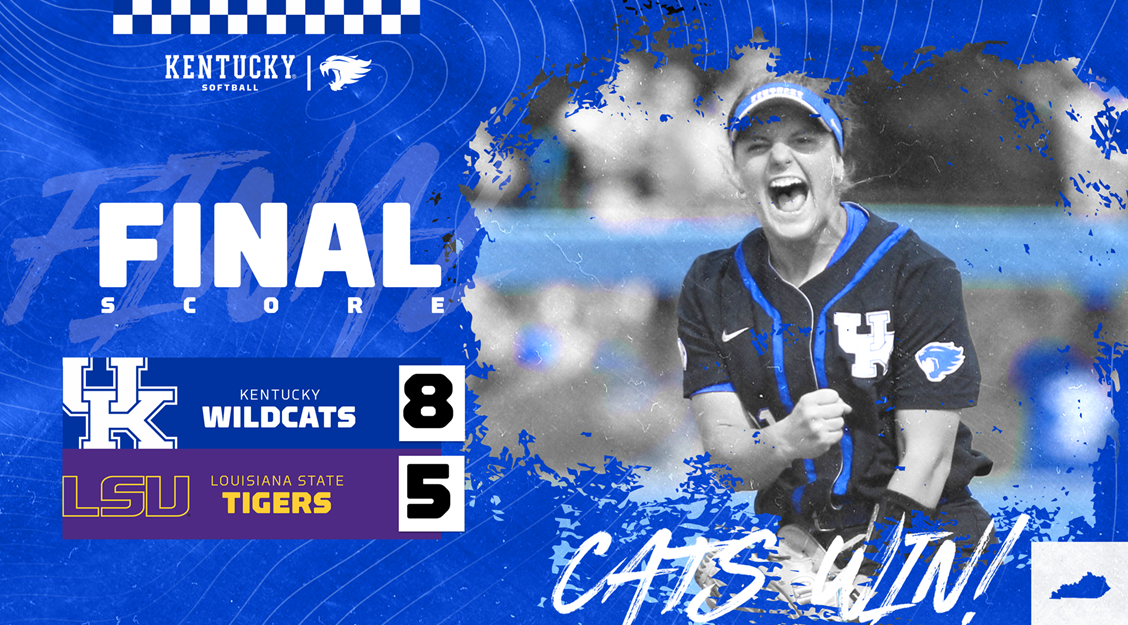 Erin Coffel hit a towering drive to left field in the top of the eighth inning with two runners on to lift No. 8 Kentucky to an 8-5 win over No. 20 LSU at Tiger Park, securing the series.

Coffel came up to the plate in the top of the eighth inning following a lead-off walk to Kayla Kowalik and an infield single by Rylea Smith to put two on with no outs. Coffel then crushed a pitch from Shelby Wickersham over the wall in left field and into the Tiger Park berm.

Tatum Spangler, who picked up her second win in as many nights in the circle, pitched the bottom of the eighth. The Tigers got the first two batters on, but Spangler buckled down and record a strikeout, groundout and flyout to end the game without a run scoring.

Kentucky improves to 24-8 on the season with Saturday night’s win on ESPN. The Wildcats are 5-3 in Southeastern Conference play. LSU falls to 22-14 and 3-5 in SEC play.

The series concludes Sunday afternoon at 1 p.m. ET from Tiger Park. The game will be broadcasted live on SEC Network+, ESPN+ and the ESPN app.

The key play of the game was Coffel’s three-run home run to left field in the top of the eighth inning to give Kentucky the 8-5 lead. Another key play was a #SCTop10 catch by outfielder Rylea Smith in right to begin the bottom of the seventh inning off the bat of Georgia Clark. Smith was backing up into the wall and spun, robbing Clark of a homer to lead off the frame.

Lauren Johnson was the key player in the game, going 3-for-5 at the plate with another multi-hit performance. Johnson scored the go-ahead run in the fifth on Tatum Spangler’s RBI single into center.

2. Rylea Smith’s at bat in the top of the eighth survived two replay reviews, ultimately ending up with her at first base.

LSU scored four times in the bottom of the first thanks to a walked-in run and a three-RBI double. LSU 4, UK 0

Lauren Johnson had an RBI single to score Kayla Kowalik in the top of the third to put UK on the board. LSU 4, UK 1

Vanessa Nesby and Taylor Ebbs were walked to lead off the UK fourth and Nesby scored on a fielder’s choice on Kowalik’s at bat. Rylea Smith then singled to score Ebbs and an Erin Coffel RBI groundout to the left side tied the game. UK 4, LSU 4

Kentucky took its first lead of the game in the top of the fifth inning as Tatum Spangler roped a two-out RBI single into CF to score Lauren Johnson, who led off the inning with a single. UK 5, LSU 4

LSU tied the game on an RBI double in the bottom of the sixth. UK 5, LSU 5

In the top of the eighth, Kowalik was walked and Rylea Smith singled to the left side to put two on with no outs. Coffel then deposited her team-leading 10th home run of the season to left to give Kentucky the win. FINAL – #8 Kentucky 8, #20 LSU 5