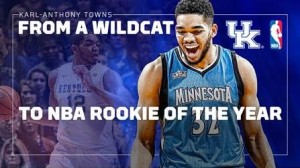 Towns was honored as the league’s best rookie on Monday, becoming the first former Wildcat to earn the distinction. Towns is the fifth-ever and the first unanimous Rookie of the Year since Damian Lillard in 2013. He is the third player coached by Calipari to win the honor, joining former Memphis players Tyreke Evans (2010) and Derrick Rose (2009).

The Piscataway, N.J., native is the first NBA rookie to average 18.0 points, 10.0 rebounds and 1.0 blocks per game since Elton Brand in 1999-00. He finished his rookie season averaging 18.3 points, 10.5 rebounds, 2.0 assists and 1.7 blocks per game en route to sweeping the NBA Rookie of the Month award for the Western Conference, the first player to achieve the feat since Lillard in 2012-13. He is the just the eighth player in the history of the league to win the award in all six months of his rookie season, joining the likes of Lebron James, Tim Duncan and David Robinson.

Towns is the second player in Minnesota’s history to win the Rookie of the Year award. He and teammate Andrew Wiggins (2015) are the first players to win the award on the same team in back-to-back seasons since Bob McAdoo (1973) and Ernie DiGregorio (1974) of the Buffalo Braves.

He closed out his rookie season becoming the third rookie in the last 20 years to post three consecutive months averaging 20 or more points and 10 or more rebounds. He joins Duncan and Blake Griffin in achieving the feat.

On April 3 vs. Dallas, Towns became the first rookie since Elgin Baylor in 1959 to collect at least 21 rebounds and nine assists in the same game when he logged 21 rebounds, nine assists and 11 points in a win over the Mavericks. The 21 rebounds tied Gorgui Dieng’s club record for a rookie, while the 18 defensive boards is a new team high.

A consensus second-team All-America selection in 2015 in his only season at Kentucky, Towns helped lead UK on a historic run, becoming the first team to win 38 consecutive games in NCAA history. He was the Southeastern Conference’s Freshman of the Year after averaging 10.3 points and 6.7 rebounds per game. He went on to become UK’s third No. 1 overall draft pick in the last five seasons when he was picked first by the Timberwolves in June.

Additional awards for the NBA season will be announced at a later date including All-NBA and All-NBA Rookie team selections.