From Blowout to Shootout – West Carter Stages Big Comeback, but Beechwood Snuffs Out the Comets 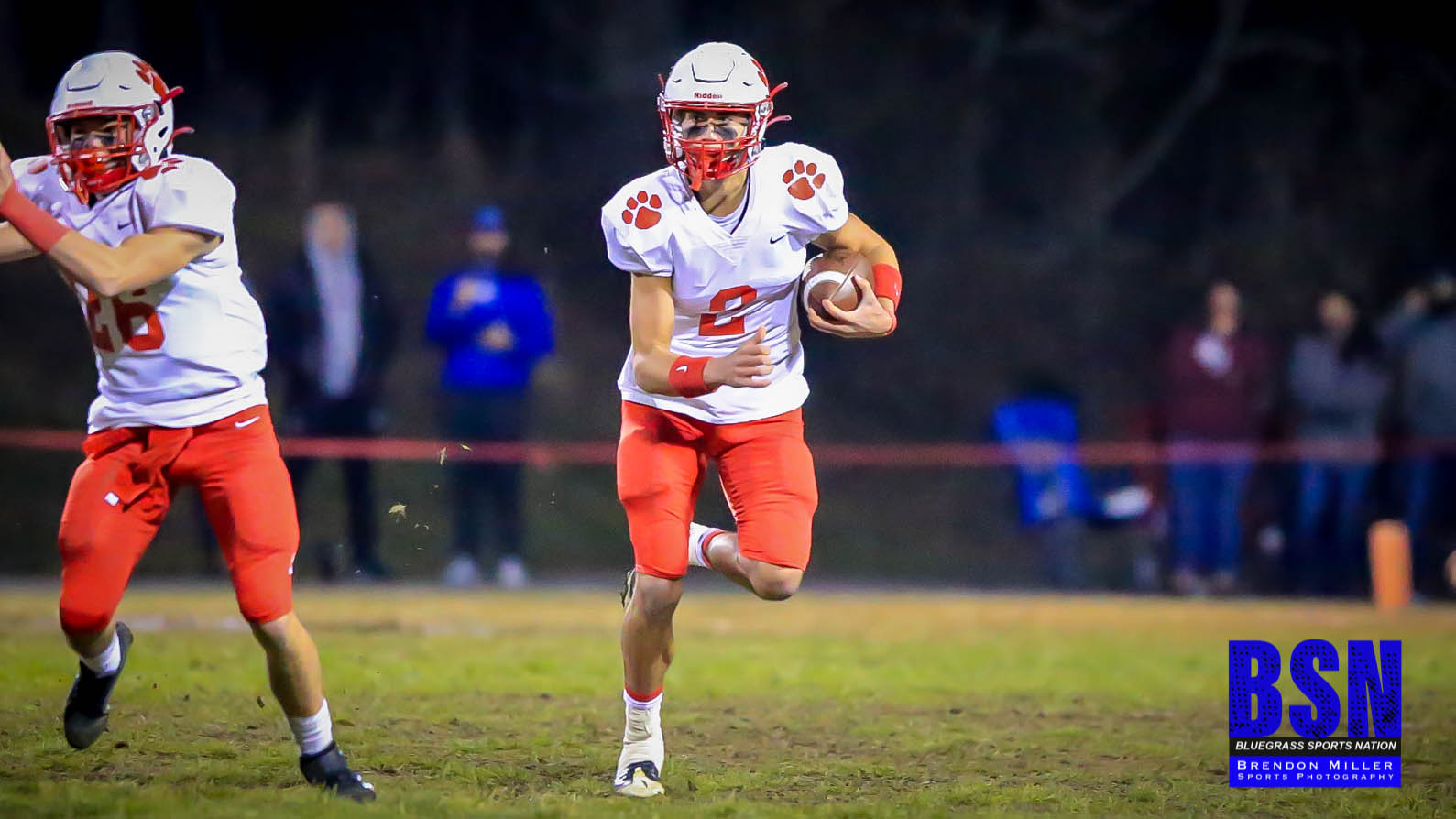 On Friday, the Tigers from Fort Mitchell headed to Olive Hill to face the Comets with a trip to the State Finals on the line. This would be first trip to the Semi-Finals for West Carter, an up-and-coming program in Class 2A, and familiar territory for the 14-time Class A Champion Beechwood, in search of their first 2A Final.

The two met last season in the Regional final round of the playoffs with Beechwood taking a 42-7 win. Though this semi-final match up had the looming question that was sure to be on everyone’s mind coming into the night. Would Beechwood handle another Eastern Kentucky team or would West Carter stand their ground and declaw the Tigers? Being a player and fan, I couldn’t wait to attend what was bound to be an exciting matchup with a State Finals on the line.

When the 7:30 kickoff came about, Beechwood was set to receive the kick. After a good return, the Beechwood offense, led by quarterback Cameron Hergott, a Mr. Football candidate, prowled onto the field. The Tiger O has a very well put together running and passing game, and paired with well executed play calling, and much talent, is hard to stop.

The Tigers over-powered the Comets early and jumped out to a 20-0 lead, scoring on their first three drives. Hergott hit Parker Mason on a post pattern in the endzone to open the scoring. After the Comet offense sputtered early and Beechwood scored on their second possession on a Hergott sneak leaping over the line.

West Carter turned the ball over in their territory on the next possession, and Hergott hit Liam McCormack, on the first play down to the one. Hergott punched it in from there.

Beechwood was poised to put the game away early in the second quarter as they drove toward the endzone on their fourth possession. West Carter would stop the threat as Senior defensive back, Gage Leadingham knocked down a fourth down pass in the endzone to stop the drive, but was sandwiched on the play by two Beechwood players and injured. Leadingham had to be taken from the field in an ambulance.

The Leadingham injury, and twenty plus minute delay as he was , seemed to stem the Beechwood momentum and West Carter took advantage. The Comets began to establish their running game behind Senior star Leetavious Cline moving the ball down the field. Senior quarterback Orry Perry hit Blake McGlone from 18 yards to put the Comets on the board and make the score 20-7 at the half. After being on the verge of being blown out, the Comets went into the locker room with hope, and the Tigers went to their corner of the field thinking of what was to come for the 2nd half.

West Carter received the second half kick and brought the momentum they gained back out onto the field. The Comet offensive line assered their dominance and unleashed Cline. Cline began picking up chunks of yards and set up Perry to hit wide out Jackson Bond on a crossing route from 21 yards for the score. Bond became the West Carter single-season receiving leader on the play. The Comets could not convert the kick making the score 20-13.

The Comets had all the momentun and they did not plan on letting it get away, as they executed an onside kick and recovered. The Tigers were reeling and the Comets took advantage. Cline lead the way with run after run, eventually scoring from three yards. Cline picked up his 2000th rushing yard of the season on the drive as he was already the career rushing leader at West Carter. The two point try was not converted, leaving the margin at one, 20-19.

The Comet defense forced the Tigers to punt on the next drive and Comets again drove the ball down the field with Cline again racking up many of his 200 yards (36 carries) on the night. Cline punched it in from 14 yards out, and Perry hit Bond on the conversion to give West Carter their first lead, and culminate the 27 unanswered points by the Comets since the injury to Leadingham.

This is where the game really took a turning point, as it had gone from a blowout, to a comeback, to a shootout. The last few possessions presented the grit and strengths of the players on both sides. West Carter’s comeback put them on the edge of the win and they were ready to finish the fight, but Beechwood would not lay down and accept defeat. The ending would make the game an instant classic.

Hergott would go back to work hitting and hit McCormack in the endzone with a contested catch to tie the game at 27. Perry then hit Bond for his second touchdown on the night from 31 to put the Comets back in the lead. Garrett Wolfe’s kick made it Comets 34 – Tigers 27, with 5:02 to play.

With the game, and the culmination of his career on the line, Hergott then hit Brady Moore from 44 with 2:32 on the clock to make the score 34-33 Comets. The stage was set for Tiger Coach Noel Rash to decide, would Beechwood play it safe and kick an extra point to tie the game, or would they go for two to try and seal the deal?

Rash’s decision was to put the ball in Hergott’s hands, instead of trying to kick in the Carter County mud. What followed was simply phenomenal. Snapped from the left hash, Hergott rolled out right, looked to throw back across the field, scrambled and stayed alive in that Carter County mud until Moore freed himself in the back of the right corner of the endzone. Hergott fired and Moore brought it in for the conversion.

West Carter had one final chance, but a sack and holding penalty forced a 4th and long pass, which the Tigers batted down with less than a minute left. Hergott knelt to run off the remaining time, sending them to their first 2A Finals.

Beechwood will play LCA next Friday at 3:00 to decide the KHSAA 2A Champion. West Carter concludes their year at 10-2 and will be force in 2A going forward.