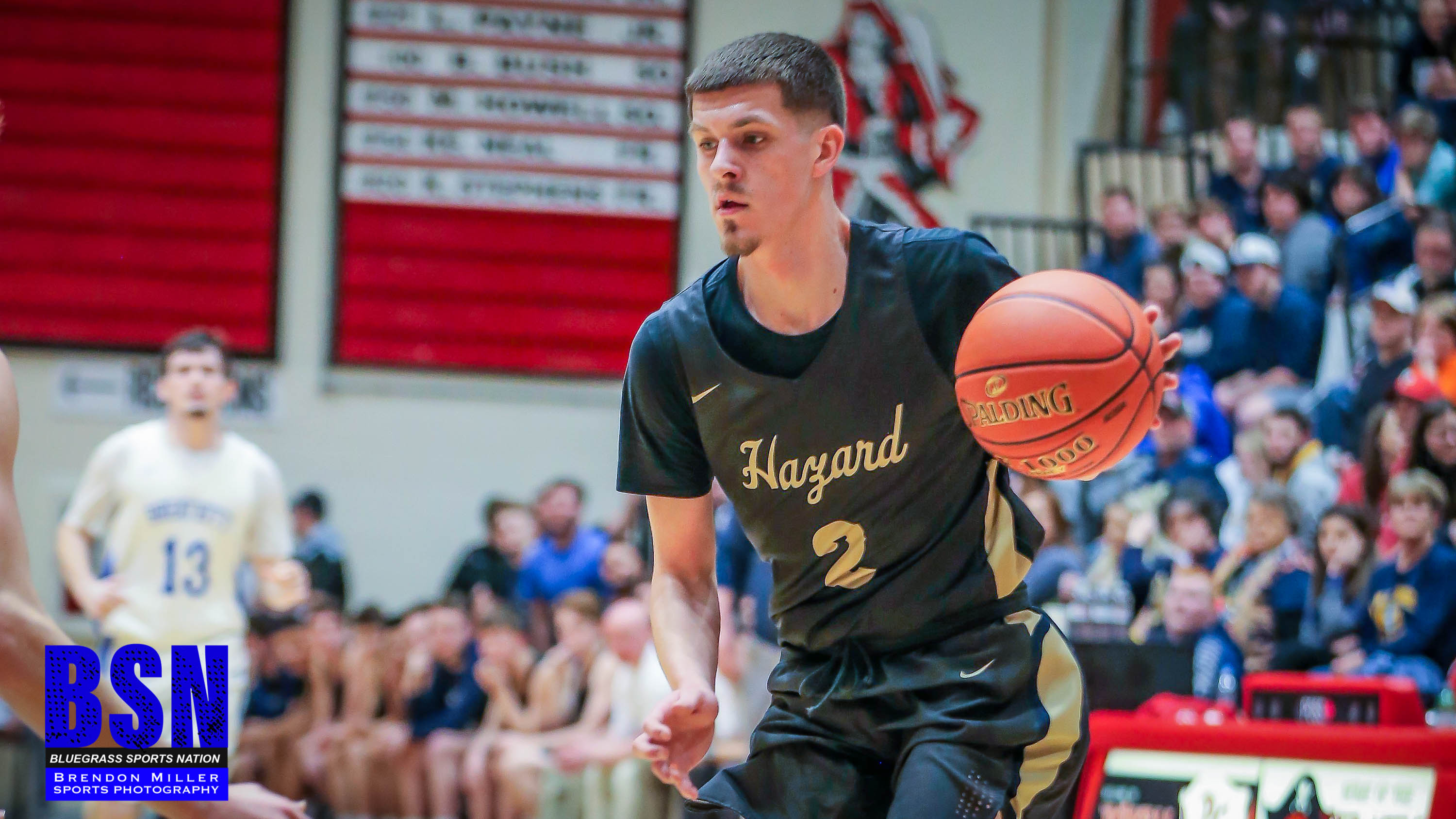 Hazard outscores Breathitt 15-4 in Overtime to Advance to Semi’s.

Regulation was just not enough to settle matters between Breathitt and Hazard in the last 1st Round match up of the 2019 14th Region Boys Tournament. Breathitt, Champions of the 55th District, and Hazard, 54th Runners up, are two of the traditional Blue Bloods in the 14th Region and each played to their pedigree.  The match up was the most anticipated and hyped quarter final of the tournament, as Hazard brought the best record in the 14th Region standings at 24-8, with the Bobcats not far behind with an overall record of 20-9.  This game was a rematch of a dandy earlier in the year as Hazard defeated Breathitt County 64-57 in overtime at Memorial Gym.

The gym at Powell County was packed with spectators to take in the match up and the 1st Quarter did not disappoint. The teams traded baskets to opening quarter with Senior Kyle Fraley knocking down two deep balls to pace the Bobcats while Logan Hall going for the Dawgs in the paint with 5. End of 1st Hazard let 13-12.

In the 2nd Quarter the Bobcats surged ahead behind the play of Braxton O’Hara who had 8 in the period and Brandyn Slaughter who had five, combining for 13 in the Quarter. Hazard chalked up 3Balls by Austin Bennett, and Jarrett Napier, but at the half the Bobcats were up by five, 32-27. Fraley surpassed the 1000-point mark in the second quarter with a made three-point basket.  mission.

The 3rd Quarter started well for Breathitt as they increased their lead to as large as nine at 40-31 with baskets from Jalen Taulbee, Fraley and a three from Senior Cameron Stacy, but finished even better for Hazard. Hazard hit the gas and went on a 16-5 run for the balance of the Quarter behind two three’s from Bennett and work on the boards by Hall and Reece Fletcher. Sophomore point guard Wade Pelfrey hit a jumper to close out the quarter giving the Dawgs a 47-45 lead heading to the 4th.

The 4th Quarter will be remembered as one of the best quarters of the entire 14th Regional Tournament.  The teams traded baskets to open the quarter and the atmosphere was electric.  Breathitt scored the first five points in the quarter as Taulbee scored on slashing drives, giving Breathitt the momentum.  Hazard then responded with its own 5-0 run as Bennett connected for 2, and Pelfrey knocked down a huge corner three. Hazard led 52-50 with 6:01 remaining in the game.  Hazard Coach Al Holland then decided to slow down the pace by running some plays well over a minute, before getting into their offense.  Hazard grew the lead to four points with under two minutes to go.  Taulbee was able to get into the lane, score and get and 1’s, making four of four from the stripe in the quarter and finished his Bobcat career with 12 of his team-high 18 in the quarter. Taulbee tied the game at 62 with :31 on the clock and Hazard had a last show that di dn to go down.

In the overtime period, the Bulldogs quickly developed a comfortable six-point lead, 68-62 with 1:55 remaining in overtime.  Breathitt struggled scoring the ball in the extra period.  Austin Bennett nine of his game-high 24 to basically shut the door. Hazard outscored the Bobcats 15-4 in Overtime to set the final margin at 77- 66.

Hazard heads to the 14th Region Semis to take on Powell County on Friday Night, March 1st in second game of the night.  Hazard is now 25-8 on the season and Breathitt concludes the season at 20-10.

This was the final game for Bobcat Seniors Jalen Taulbee, Kyle Fraley, Cameron Stacy, Chandler Howard, J.T. Ohair, Marty Fugate, and Bryant Noble. Kyle Fraley joined the 1,000 point Club at Breathitt during the 2nd Quarter of the game. Congratulations to all!!