How Sweet! Michigan Overcomes Louisville, Advances to Round of 16 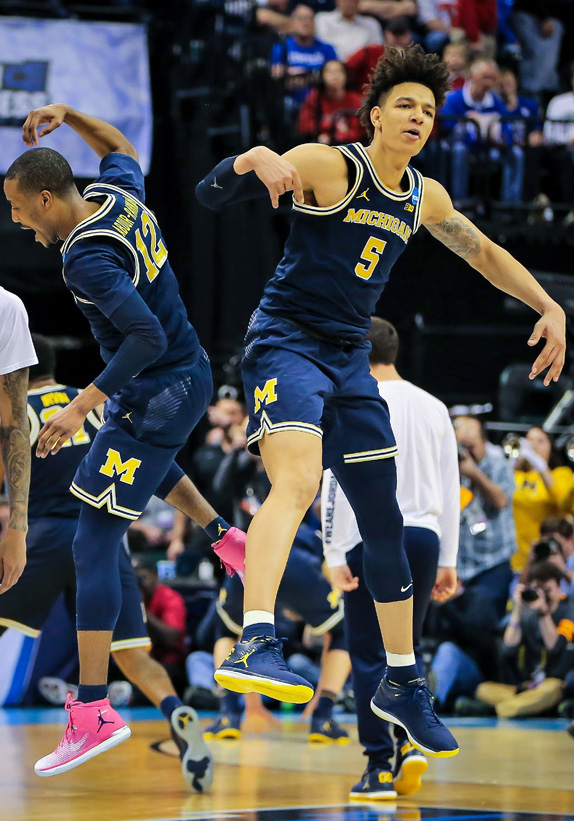 What You Need to Know
» Michigan erased a nine-point second half deficit on the strength of 63 percent shooting in the decisive half
» Moritz Wagner scored a career-high 26 points on 11-of-14 shooting.
» D.J. Wilson’s four free throws with under 30 seconds to play sealed the win

The Wolverines advance to the round of 16 where they will face the winner of third-seeded Oregon and 11th-seeded Rhode Island. The game will take place in Kansas City on Thursday (March 23) at a time to be determined.

Louisville enjoyed momentum throughout the early going and used an 8-0 spurt at the end of the first half to claim a 36-28 halftime advantage. The Cardinals extended their lead to nine with another early burst in the second half, before the Wolverines mounted a steady comeback, aided by the energy of Moritz Wagner and timely plays from Zak Irvin, Derrick Walton Jr. and D.J. Wilson.

Wagner buoyed the Wolverines against UL early in the second half, scoring eight early points, in giving the distinct sense that UL had no answers for the German mainstay.

With 13:23 to go, Wagner intercepted a pass near midcourt and drew a UL defender away from the hoop before feeding an assist to Irvin. The basket prompted a UL timeout with a 47-42 lead. Following the break, Irvin stuck a pair of his patented mid-range jumpers to get back within three on two occasions, including at 49-46 with 11:45 remaining.

Wilson then stuck a triple from the top of the key to make it a one-point game at 50-49, before Muhammad-Ali Abdur-Rahkman contributed two freebies and a driving tip-in to give U-M its first lead since early, 53-51, with 8:54 left.

Momentum had suddenly shifted as Wagner and Walton nailed consecutive long balls to give U-M a 61-57 lead with 5:30 left, before Wagner struck again with a driving layup for a six-point lead. The junior big man kept the lead at six, 67-61, following another emphatic take with a little more than two minutes remaining.

Following Wagner’s layup, he immediately drew an offensive foul to regain possession with 1:10 left. Louisville’s pressure immediately came up with two turnovers and quick layups to make it a 67-65 game with 56 seconds left. On its third attempt with the lead, U-M got the ball in play, and Walton showed his leadership with a gutsy take to the rim and a 69-65 advantage with now less than 30 seconds remaining.

UL scored again but, forced to foul, sent the steely Wilson to the line. The California native calmly sank four free throws over the course of two possessions before sealing the victory with a blocked shot on a desperation three-point attempt.

Michigan’s second-half performance was remarkable yet again. John Beilein‘s Wolverines shot 63 percent from the floor (17-for-27) while holding the Cardinals to a 1-for-10 mark from long range thanks to a compressing defense that negated Louisville’s length inside.

Wagner logged a career-high 26 points (14-14 FG) in 31 minutes, while Wilson had 17 points (6-13 FG, 4-4 FT) and three blocks. Walton stuffed the stat sheet again with 10 points, seven rebounds and six assists, while Irvin’s shots were all important as the senior finished with 11 points on 5-of-9 shooting.

Michigan committed just six turnovers as the Wolverines continue to lead the nation in ball control.

Louisville built a 15-8 lead early as the Cardinals hit on 6-of-10 to start, but U-M answered with consecutive triples from Irvin and Mark Donnal to make it a 17-14 game at the under-12 media timeout. Both offenses sputtered for the remainder of the half. Louisville used its length to get high-percentage chances inside, while U-M’s ball movement and balanced scoring kept the Wolverines within three points until hard take from Wagner tied the game at 28-28 with 1:36 to go.

U-M was called for three crushing reach-in fouls in the first half, and UL capitalized, connecting six times at the free throw line and taking its largest lead, 36-28, into the locker room thanks to those calls and a pair of timely three-pointers from Donovan Mitchell and Deng Adel, who finished with 16 points (6-11 FG) and five rebounds.

• Michigan is 12-2 in its last 14 games.
• Michigan has won at least one NCAA Tournament game in six of its seven tournament appearances under John Beilein.
• Michigan set a new school record with 350 made three-pointers this season.
• Michigan made its 27th (22nd*) all-time NCAA Tournament appearance and its seventh under head coach John Beilein.
• Michigan leads the country in fewest turnovers per game with just 9.42 miscues per contest. The Maize and Blue also ranks sixth in the country in fewest fouls, committing just 15.1 per game and 11th nationally in free throw percentage, shooting a school-record 77.5 percent from the charity stripe.