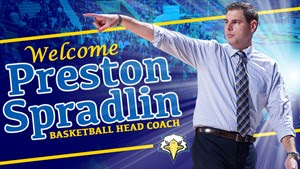 MOREHEAD, Ky. – Preston Spradlin, who spent the majority of the 2016-17 season as interim head coach and just concluded his third season with the program, has been named the 14th head men’s basketball coach at Morehead State.

“First off, I am so grateful to President Wayne D. Andrews, Brian Hutchinson, and our administration for the opportunity to lead the men’s basketball program and to represent Morehead State University and the community of Morehead,” said Spradlin. “As a native Kentuckian, and more importantly, as someone that has been a part of the Morehead State family for the past three seasons, I fully understand how special this university is and I am honored to continue serving our student-athletes in all facets and am eager to reignite our passionate fan base.”

“Preston emerged through a rigorous process that demonstrated truly how special this job is in the basketball community,” said President Wayne D. Andrews. “I have appreciated his good work throughout this season and know his values will help us continue to achieve our goals at a very high level.”

“Preston exhibits many fine qualities that I look for when considering head coaching candidates,” said Director of Athletics Brian Hutchinson. “His knowledge of our basketball program is unique, which gives him a head start in building towards our short term goals. Most importantly, he’s a student-first coach that will undoubtedly lead us to achieving our long term goals in the OVC and nationally. I’m honored to have Preston lead our men’s basketball program for years to come. He’s earned the job and we need the Eagle Empire to rally behind him and this program.”

Spradlin officially took on the interim head coaching position on Dec. 15, 2016, nine games into the season after the Eagles opened with a 2-7 record. He then guided Morehead State to a 12-9 record the rest of the way and a 10-6 mark in OVC play, which ranked second in the league.

At the conclusion of the season, he finished second to Belmont’s Rick Byrd in OVC Coach of the Year voting.

Following the 2015-16 season, Spradlin was named to the National Basketball Coaches Association (NABC) 2016 Under Armour 30-Under-30-Team, which recognizes 30 men’s basketball coaches across the country that are under the age of 30.

Spradlin came to Morehead State after five seasons with national power Kentucky. He spent two campaigns (2009-11) as a graduate assistant with the Wildcats before three years as the assistant director of operations (2011-14).

Spradlin, a native of Pikeville, Ky., worked with the Dominican Republic National Team during the summers of 2011 and 2012. The squad reached its highest finish and won the bronze medal in the Tournament of the America’s Olympic Qualifier in 2011 and came within one game of qualifying for the 2012 Olympics.

Spradlin earned a bachelor’s degree in history from Alice Lloyd (Ky.) in 2009 and master’s degree in kinesiology and health promotion, with a sports leadership emphasis, from Kentucky in 2011. He was a four-year men’s basketball letterwinner for the NAIA Eagles from 2005-09.

What they are saying about Coach Spradlin…

“I am so proud of Preston. He was a valuable member of our staff. Being from Eastern Kentucky, I’m sure it is a dream come true for him to get this position and there’s no doubt in my mind that he will make the school and their fans proud.”

“In the five years he spent with us at Kentucky, we all saw the kind of coach and the kind of man Morehead State has in Preston Spradlin. His work ethic, mind for the game, and ability to lead young people are truly special. Those qualities were all on display in the incredible work he did stepping in as interim coach this season. We are thrilled for Preston, Misty and Bentley, and look forward to his continued success.”

“I first met Preston at the University of Kentucky and came away impressed with his communication skills and humble personality. This year I watched several of his games as the interim head coach at Morehead State. His team played with passion and you could see they were connected as a group. He did an outstanding job leading his team in a stressful situation because he always made it about the players first. Morehead State found the right candidate in Preston Spradlin to lead their program in the competitive Ohio Valley Conference.”

“Preston Spradlin is the total package. He can coach, teach, and mentor. He has impeccable character and a work ethic second to none. He is a home run hire.”