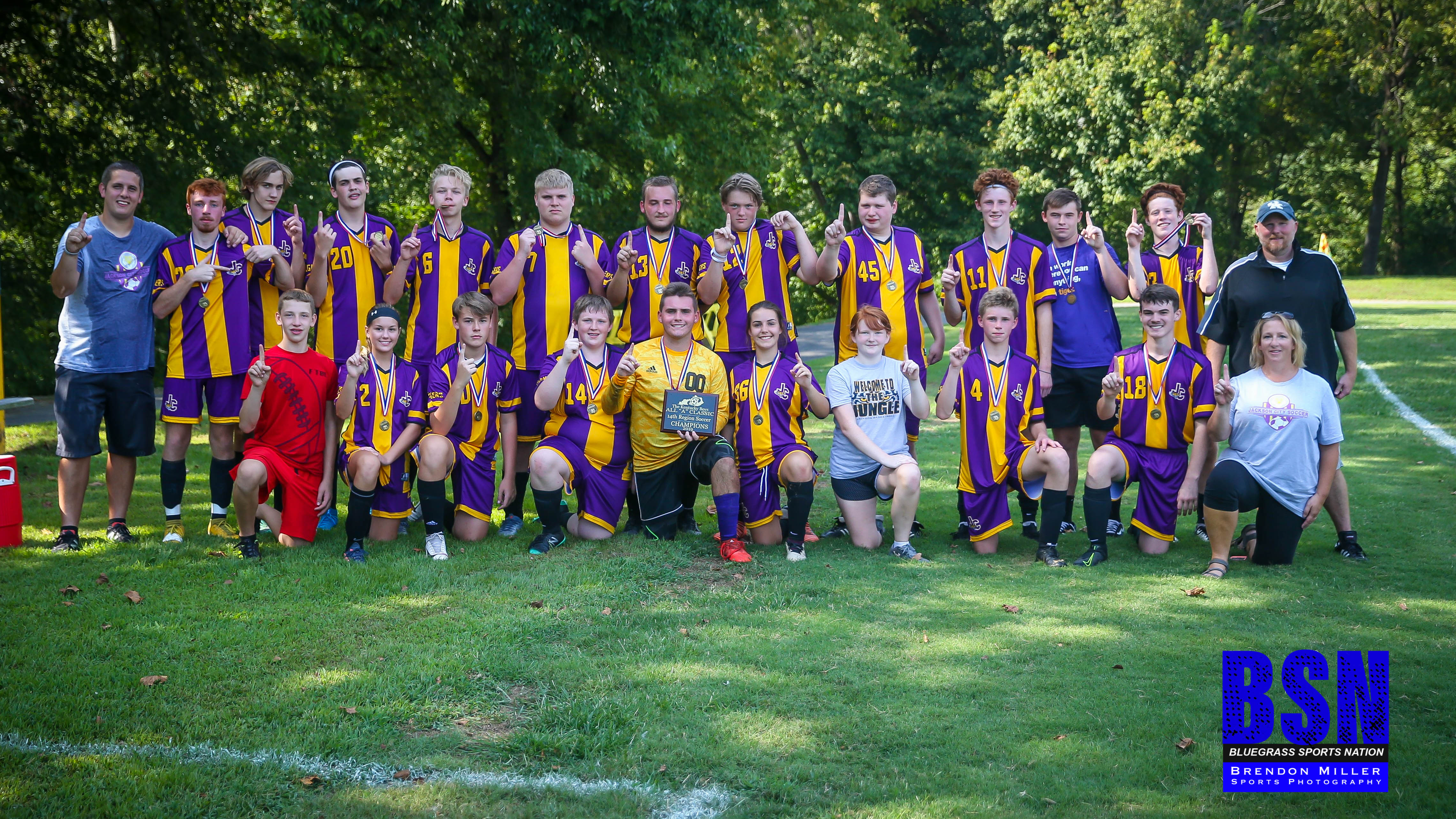 Tigers defeat OBI 4-3 in a thriller!!

After winning the 14th Region All A Title on a goal at the death on Sunday, Jackson welcomed 13th Region Champion Oneida Baptist Institute to Douthitt Park on Wednesday for the Sectional Championship. OBI came into the game at 8-1 on the season and having out-scored their opponents 66-5. Jackson entered the game at 6-3-2.

The game opened with both sides jockeying for control of the midfield. Jackson opened by pushing Junior forward/midfielder Micah Henson deep on defense and basically played five at the back to enable counter attacking opportunities. The tactic worked as Jackson opened the scoring as Senior striker Slayden Sizemore knifed behind the defense off of a long goal kick at the 26:50 mark to put the Tigers on top 1-0. The goal was Sizemore’s 29th of the season.

Jackson then used the same tactic to double their lead. Again off a long counter attacking kick, at the 15:00 mark Sizemore burst down the right side to out run the OBI defender and cross the ball. Winger Payton Tharp was in the box to poach his second goal of the season, and put the Tigers on top 2-0.

OBI began to build into the game behind the hard work of their double-digit goal scoring forwards Isaac (18), Sochi (13) and Nathaniel 10). Those three, along with midfielders Yoo, Chidera, and Ikenna began to assert their influence on the game and pressure the Tiger Defense. Isaac put the Mountaineers on the board at the 5:00 mark as he netted his 19th.

At the intermission, Jackson led 2-1.

OBI began the 2nd half controlling with increased tempo and equalized through Isaac’s left footed strike less than nine minutes in at 31:38. Isaac struck again at the 24:58 mark completing his hat trick and put the Mountaineers in the lead, and in seeming control of the game.

The game saver for the Tigers came as OBI tried to put the match away as Tiger goalie Dawson Prater made a tremendous save as Sochi broke free on a great through ball to goal, at 21:25. A goal, and the game was basically over and the save allowed the Tigers to gain momentum.

Jackson moved Henson forward and pressed for an equalizer. The equalizer came at the 3:51 mark as Jackson took a corner by Colton Smith. Smith’s corner was high and came to the near post where Henson headed in for his 10 of the season.

The game seemed destined for extra time, but Jackson had other ideas. The Tigers kept the pressure on OBI and Sizemore used his skill to again get in on goal and net the winner at 2:41.

Jackson wound out the clock and jubilation filled Douthitt Park.

Outside of the Ginger Avengers, of Sizemore, Smith and Henson, and Goalie Prater, Jackson had great performances from Defenders Xander Terry, Paul Champ, Brandon Large and Drew Botner, as they had to deal with the talented and skilled OBI forwards. Midfielders Brandon Wolfe, Josh Petty, Hylton Sizemore and Ethan Pugh put in excellent shifts. Wingers Tharp and Dyson Clair were instrumental.

Jackson now advances to the All A State Tournament.