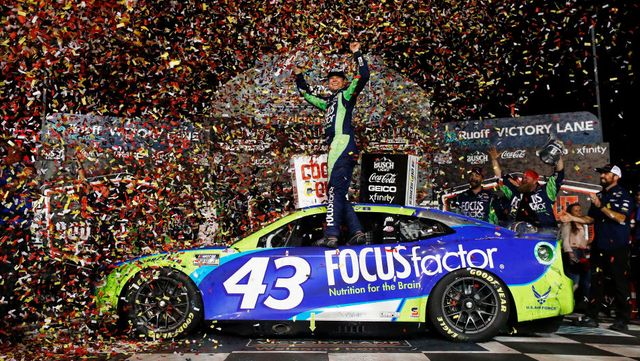 (Richard) Petty GMS Motorsport’s driver Erik Jones receives a jewel for his crown winning the first NASCAR Cup Series playoff race of 2022 in the Cook Out Southern 500 at Darlington Raceway in Darlington.

Erik found himself as one of the 17th different winner of the 2022 NASCAR Cup Series season as well as the first “non-playoff” driver to ever win the first playoff race of a NASCAR Cup series postseason.

William Byron led the charge in Stage 1 and claims the victory under caution marking his first stage victory since April.

Regular Season Point’s leader Chase Elliott beaks a “toe end” off the front suspension sending the Cup champ spinning out of control on lap 113 of the 367-lap race.  Elliott additionally collected Chase Briscoe in the melee to bring out the caution. Elliott was ruled out for the remainder of the race as his team was unable to repair his No. 9 Chevrolet under the pit row 10 minute window.

Martin Truex Jr. took control of the final segment setting sights to rain on the Playoff’ parade. However, JGR No. 19 Toyota began experiencing mechanical issues, and he was forced to pit erasing any anticipated positive finish.

Feast or famine Kyle Busch resumed the lead after Truex Jr.’s misfortune. To Bush’s dismay, the Event was placed under caution with less than 22 laps remaining, as Busch’s No. 18 Toyota also began displaying engine issues.

Counting 20 laps to go, Erik Jones ceased the lead while guarding his post from an advancing Denny Hamlin clearing a path to his 2nd victory at the Lady in Black.

The NASCAR Cup Series Playoffs of Elimination will continue on Sept. 11 for the Hollywood Casino 400 at Kansas Speedway.