HOOVER, Ala. – Sophomore shortstop Riley Mahan had a pair of hits, including an RBI double, but the Kentucky baseball team lost to Alabama 5-2 in the first round of the SEC Tournament on Tuesday at Hoover Metropolitan Stadium. 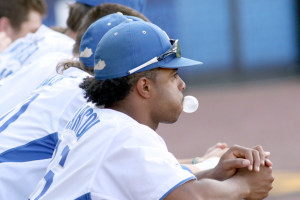 Alabama (32-24) scored first, plating three runs in the top of the second inning off of Kentucky starter Zach Logue (3-2). But Logue settled in after that inning and did not allow Alabama to score again as he pitched five and two-thirds innings, allowing just two earned runs on six hits. Logue walked just one and struck out two.

White’s home run in the fourth cut the Alabama lead to 3-1. Neither team scored again until the Wildcats got a run in the bottom of the seventh. That’s when Mahan doubled down the left field line, scoring senior outfielder Dorian Hairston to cut the Tide’s lead to 3-2. It was Mahan’s 13th double of the season.

The score stayed the same until the top of the ninth when Alabama added a pair of runs to provide the final margin of victory.

Kentucky (32-25) had taken two-of-three games from Alabama during the regular season at Cliff Hagan Stadium in mid-April.

The Wildcats will now wait for the NCAA Tournament selection show on Monday to see where they might continue their season.