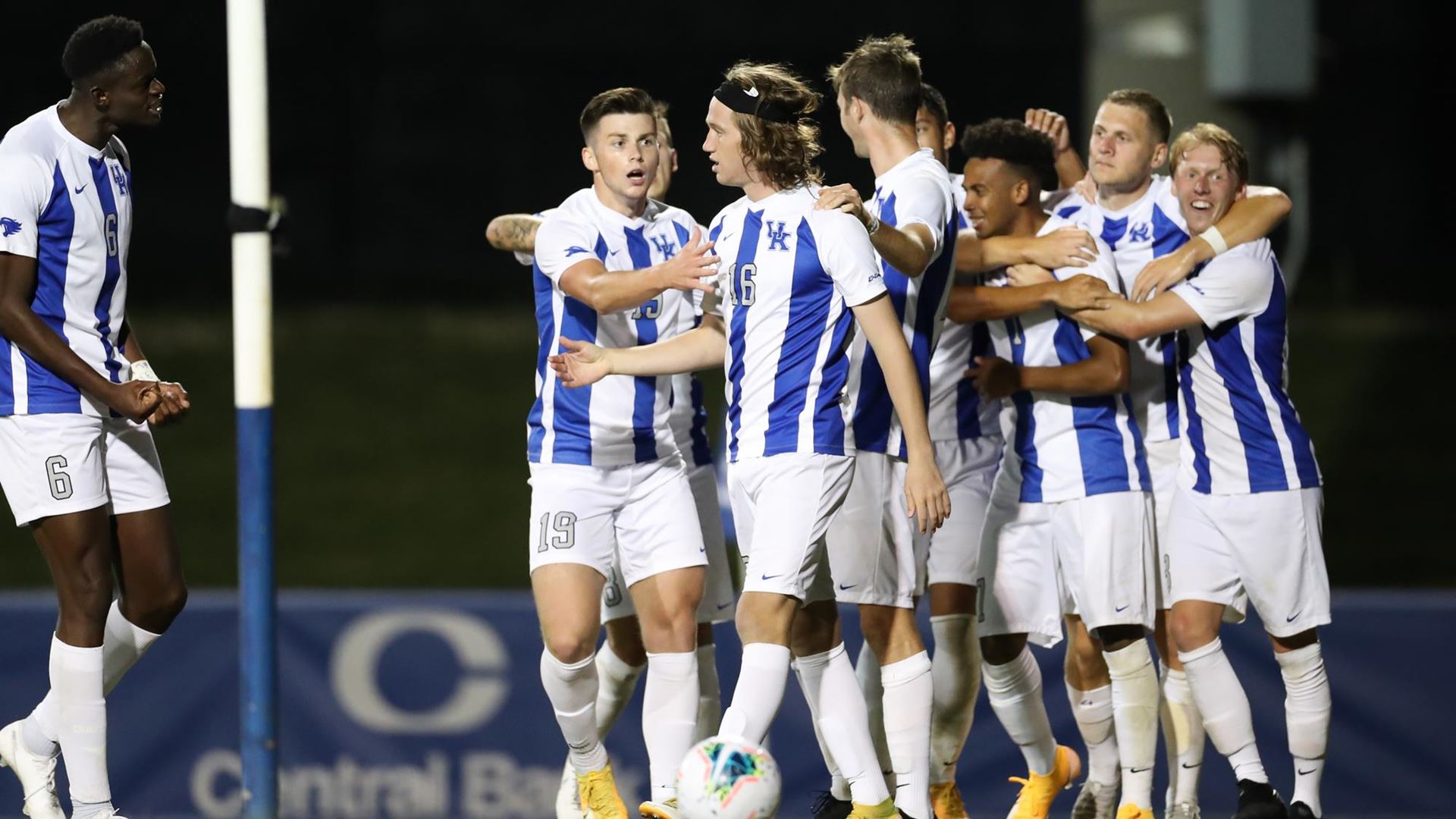 Behind the most prolific scoring output at Wendell & Vickie Bell Soccer Complex in nearly 11 months, Kentucky outscored Duke 4-2 on Monday in the Wildcats’ home debut.

Rebounding from a 1-0 loss at Notre Dame last Thursday, Kentucky improves to 1-1 on the season. Duke, competing in its first regular season contest since last November, falls to 0-1.

Aimé Mabika, Kalil ElMedkhar, Bailey Rouse and Daniel Evans each put one in the back of the net for the Cats, with two assists being credited to Robert Screen and one apiece going to Marcel Meinzer, Colin Innes and Brandon McManus.

The Blue Devils were set up to break the match’s opening stalemate when Kentucky starting goalkeeper Enrique Facusse received a yellow card for a vigorous attempt to corral the ball from Nicolas Macri in the 18th minute. The ensuing penalty kick was scored by fifth-year Duke senior Jack Doran, who missed the entire 2019 season with injury.

The lead didn’t last long, however, when a corner kick from Screen found the head of the 6-foot-6 Mabika directly in front of the woodwork, tying the match at 1-1 in the 25th minute.

Duke responded quickly to its relinquished goal, as well, when eight minutes later Conor Kelly found Daniel Wright inside their attacking box for the near-post equalizer.

Not to be outdone, Meinzer led ElMedkhar down the left wing into open space, allowing the decorated senior to beat his man with a showcase of patented footwork and a well-placed rocket that bent around Duke keeper Will Pulisic into the upper-right corner of the goal in the 41st minute.

The teams headed into the locker room in a 2-2 bind at intermission.

The second period was all Kentucky, though, exemplified by the two additional goals and 10 second-half shot attempts unanswered by the visiting team.

Another corner kick executed by Screen from the left side of the field connected with the head of Rouse for what proved to be the game winner in the 76th minute. Evans padded the lead with one final goal in the 86th by way of an unselfish string of passes from both Innes and McManus from six yards out.

Kentucky led the total shot tally 18-6, including 5-3 on target. Both teams substituted their respective goalkeepers at halftime, allowing former Bowling Green transfer Ryan Troutman to earn the first 45 minutes of his collegiate career. Facusse and Duke reserve JT Harms recorded the only two saves of the contest.

Following the first all-time meeting between the two programs, as well as the first athletic competition hosted on the University of Kentucky campus this fall, the Wildcats and Blue Devils are slated for a rematch in Durham, North Carolina, on Friday, Oct. 30.

In the meantime, Kentucky will resume action on Monday, Sept. 28, hosting in-state rival Louisville at 7:30 p.m. ET on ESPN3.