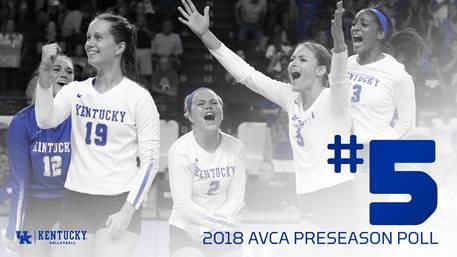 UK will host an open scrimmage on Sunday at 7 p.m.

LEXINGTON, Ky. – For a program-record seventh-consecutive year the Kentucky volleyball team will begin the season ranked in the American Volleyball Coaches Association’s preseason top 25. With the ranking of No. 5, UK ties its highest mark in program history and its highest preseason ranking ever. UK has never appeared in the preseason top 10 before.

Kentucky’s spot at No. 5 marks the highest ever under head coach Craig Skinner. UK reached No. 6 in the country last season and finished the 2017 final poll at that mark. The Wildcats have now appeared in the top-25 preseason poll for the ninth time in 10 seasons.

The preseason ranking marks the 186th time the Wildcats have been ranked in the preseason, weekly, or final poll by the AVCA. UK has been ranked in 35.2 percent of the all-time polls, which sits in the top 25 of all teams.

The poll also features four teams the Cats will face in 2018. In non-conference play, the Wildcats will open the regular season with No. 13 Creighton on Aug. 24 and then play No. 10 Southern California on the same day. UK will travel to No. 3 Texas on Sep. 7 as well. In conference play, UK will meet No. 7 Florida at home on Oct. 31. Additional foes, LSU, Louisville, Kansas and Missouri all are receiving votes. The Cats’ exhibition opponent, Western Kentucky, also received votes.

Fans will be able to see the No. 5 team in action for the first time on Sunday at 7 p.m. in Memorial Coliseum. UK is opening up its scrimmage to the public and attendance is free. Kentucky – the preseason Southeastern Conference favorite – returns three Wildcats who made the preseason All-SEC team in Leah Edmond, Madison Lilley and Avery Skinner. Edmond and Lilley were both AVCA All-Americans last season, with Edmond appearing on the first team.