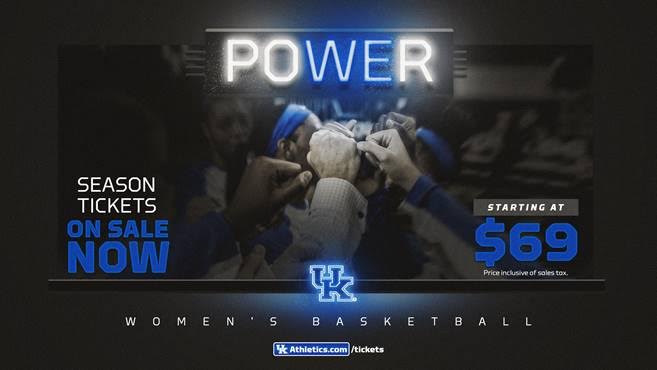 Season ticket renewals and new purchases now available at bit.ly/UK18MWB
LEXINGTON, Ky. – The Kentucky women’s basketball team will hit the hardwood in Lexington a total of 18 times during the 2018-19 season and Big Blue Nation has its chance to secure seats for every game as new season ticket purchases and renewals are available at UKathleticstix.com.

With the unique design of the Coliseum, there will be some seats that will have no view or limited view of the new video board. Season ticket holders who would like to request to move seats should submit upgrade requests online as part of their season ticket renewal, or include a upgrade request with the paper renewal form. An effort to accommodate as many ticket holders as possible will be made.

In addition to season tickets, all-session books to the 2019 SEC women’s basketball tournament are now on sale within Kentucky’s allotment at $120 each. This year’s event will take place at Bon Secours Wellness Arena in Greenville, SC from March 6 – 10. Seat locations will be assigned in K Fund priority rank order in January 2019.

UK Athletics is excited to adopt “Digital Delivery” for all Kentucky women’s basketball general admission season tickets, beginning with the 2018-19 season. Instead of receiving printed tickets, general admission season ticket holders will be able to access their tickets electronically through the My UK Account or the UK Athletics app. Fans with reserved season tickets will still have the option to receive printed ticket books or have tickets placed at will call, in addition to the new digital delivery option. For more information about digital delivery, visit UKathletics.com/DigitalDelivery. Fans who prefer printed tickets can log in to their My UK Account from a non-mobile device to access printable PDF tickets.

Each of the top four scorers will be back for UK starting with guard Maci Morris, who paced the Wildcats with 17.3 points per game and finished second in the nation in 3-point field-goal percentage at 47.5 percent. Fellow guard Taylor Murray also returns her 11.5 points per game and team best 136 assists and 67 steals. Rising sophomores Dorie Harrison and Tatyana Wyatt were the team’s third and fourth best scorers last season, respectively. Harrison averaged 6.7 points and 3.8 rebounds per game, while Wyatt averaged 6.6 points and 3.5 rebounds per game.

Kentucky will add one of the nation’s best recruiting classes to mix as well in guards Rhyne Howard and Blair Green. Howard and Green made up the 18th-best class in the nation according to All Star Girls Report. Both players were named McDonald’s All-America Game nominees and Naismith High School All-America Honorable Mention last season. Howard, who was recently tabbed one of 12 players to the Team USA U18 roster, was named Tennessee’s Miss Basketball and the Gatorade Player of the Year. Green was a finalists for Miss Kentucky Basketball and was tabbed first-team all-state this season.