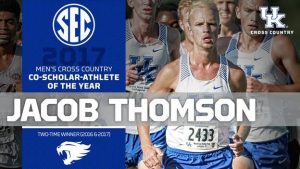 Thomson, a senior in accounting and finance, holds a 3.63 grade point average. He placed fifth at the SEC Championships, up two spots from a year ago to earn First Team All-SEC honors for the third year in a row.