Kunc, Thomson Sweep of SEC Runners of the Week for Kentucky 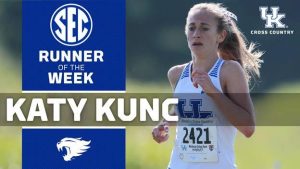 Thomson adds SEC Runner of the Week to his National honor from Monday – LEXINGTON, Ky. – Kentucky swept the Southeastern Conference Runner of the Week honors on Tuesday as Jacob Thomson picked up the men’s honor and Katy Kunc earned the women’s recognition.

Thomson was named National Athlete of the Week by the U.S. Track & Field and Cross Country Coaches Association (USTFCCCA) on Monday.

Kunc’s performance
Kunc won the Bluegrass Invitational for the third year in a row and became the first woman in the SEC to break 17 minutes for 5k this season based on times reported.

Kunc is off to a great start to 2017 after earning cross country All-America honors a year ago. She claimed bronze at the SEC Cross Country Championships last season, and went on to win the SEC 3k steeplechase in outdoor track and field before making her first NCAA final in the event. 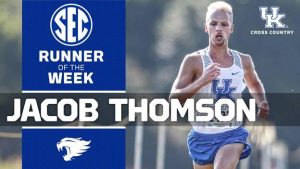 Thomson’s performance
Thomson looked the part in his 2017 cross country debut last Saturday at the Bluegrass Invitational at Masterson Station Park, winning by 11.3 seconds with a time of 23:42.10.

“Wanted to open up the season with a performance to set the tone for the rest of the season,” Thomson said. “I think I did that. Accomplished the goal.”

He ran more than a minute faster than his time at the same meet last year.

Kentucky’s next meet will be The Greater Louisville Classic in Thomson’s home town of Louisville at EP “Tom” Sawyer Park – the site of the NCAA Championships in November.