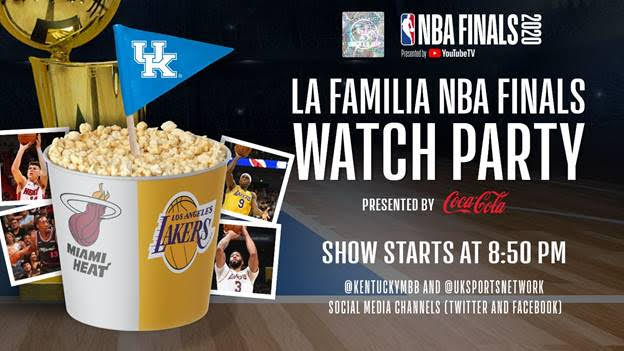 ORLANDO, Fla. – In an NBA Finals dominated by Kentucky Wildcats, it was only fitting to invite Big Blue Nation to a watch party coinciding with some of the fans’ favorite former players competing for a championship.

The La Familia Watch Party, Presented by Coke, will air live Wednesday night for game one of the NBA Finals between the Los Angeles Lakers and the Miami Heat.

Assistant coach Joel Justus and UK Sports Network’s play-by-play man Tom Leach will host a live watch party starting at 8:50 p.m. on @KentuckyMBB and @UKSportsNetwork social media channels (Twitter and Facebook). Justus and Leach will watch and talk basketball in a “megacast” format with special guests, former players and staff members, as former Kentucky stars compete live on ABC (tipoff at 9 p.m.). Fans will be able to submit questions and comments via social media to interact with the show.

The watch party will supplement what will be a Cat-centric NBA Finals. For just the fifth time in NBA history (according to STATS), four players from the same college will play in the same NBA Finals as Anthony Davis (UK, 2012) and Rajon Rondo (UK, 2005-06) of the Los Angeles Lakers will go head-to-head with the Miami Heat’s burgeoning superstars in Bam Adebayo (UK, 2017) and Tyler Herro (UK 2019). La Salle (1956), UCLA (1980), North Carolina (1991) and Arizona (2017) previously set the watermark.

Kentucky will feature six total representatives in the NBA Finals when factoring in Los Angeles head coach Frank Vogel and Miami team president Pat Riley. Vogel was a manger for UK during the 1995-96 national championship season and a video coordinator for the 1996-97 squad. Riley, of course, is a UK Athletics Hall of Famer and former All-American who starred at Kentucky for three seasons (1965-67). He has won NBA championships as a player, as a coach and as an executive.

The UK foursome that will be on the court has had their fingerprints all over the NBA Playoffs in the bubble at ESPN’s Wide World of Sports at Walt Disney World in Orlando, Florida. Davis continues to play like one of the world’s best and provided one of the top moments of the postseason with a game-winning 3-pointer. Adebayo has blossomed into one of the game’s youngest and brightest superstars, and his game-winning rejection of Jayson Tatum to begin the Eastern Conference Finals was hailed as one of the greatest blocks in postseason history. Herro, just a rookie, is already drawing comparisons to some of the league’s best scorers after hitting clutch shot after clutch shot and pouring in 37 points last week in stunning fashion. And Rondo, a wily veteran, continues to be one of the most dependable point guards and distributors on the NBA’s grandest stage.

Factor in the Denver Nuggets’ Jamal Murray, who led his team to back-to-back series wins after trailing 3-1, and the Wildcats featured four former players who scored 30 or more points in the NBA Conference Finals. According to STATS, UK is the first college program with four different (Murray, Davis, Adebayo and Herro) 30-point scorers in NBA Conference Finals history.

As a matter of fact, Kentucky alumni have already scored more points in this postseason – before the NBA Finals have even begun – than any other school in a single postseason in NBA history, according to Elias Sports.

Fifteen former Kentucky players have won an NBA championship before as a player or a staff member, including Jodie Meeks and Jamaal Magloire with the Toronto Raptors last season. Rondo is seeking to become just the third Wildcat (Frank Ramsey in 1957, 1959 and 1960-64; Los Tsioropoulos in 1957 and 1959) to win two titles as a player after capturing his first with the Celtics in 2008. For Davis, Adebayo and Herro, it would mark their first NBA championship.

Leach, Justus and a number of special guests will join the La Famlia Watch Party, Presented by Coke, to discuss that and more Wednesday.

Davis is in his eighth season in the NBA. The 6-foot-11 forward finished the regular-season ranking third in blocks (2.3 blocks per game), 10th in scoring (26.1), 14th in steals (1.5), 15th in total double-doubles (29) and 18th in rebounds (9.3). His player efficiency rating, a strong indicator of a player’s overall contributions and value, is at 27.50, which ranked fourth in the league. Entering the NBA Finals, Davis is averaging 28.8 points per game in the playoffs for the Lakers.

Named to the NBA All-Star Game for the seventh straight season in February, he was tabbed to the All-NBA First Team for the fourth time in his NBA career earlier this month. He was also named to the NBA’s All-Defensive First Team.

Davis was the 2012 NCAA Final Four Most Outstanding Player after leading Kentucky to the 2012 national championship. While leading UK in scoring and rebounding and setting the program’s single-season blocks record, Davis was considered the consensus national player of the year in 2012 before being drafted No. 1 overall by the New Orleans Pelicans (formerly the New Orleans Hornets) in 2012.

Now in his 14th season in the NBA, Rondo – the longest-tenured current Wildcat – has shown no signs of slowing down. The crafty veteran has been a key piece in the Lakers’ return to prominence, averaging 7.1 points, 5.0 assists and 3.0 rebounds for the Western Conference’s top-seeded team during the regular season.

More importantly, Rondo has stepped his game up in the NBA Playoffs as he did so many times during the Celtics’ consistent runs earlier in his career, earning the nickname “Playoff Rondo.” After missing the early part of the run with an injury, Rondo seamlessly stepped back into the fold and is averaging 7.2 assists in addition to 9.1 points per game. Six times in this postseason run he’s dished out eight or more assists.

Rondo played two seasons at Kentucky. He made the All-Southeastern Conference Second Team in his sophomore season and the All-SEC Freshman Team in his first campaign with the Wildcats. He’s the school’s leader in career steals per game and single-season leader in total steals and steals per game. Rondo was drafted 21st overall by the Phoenix Suns in the 2006 NBA Draft. He’s a four-time NBA All-Star, four-time NBA All-Defensive selection and one-time All-NBA pick.

Adebayo, who was a part of the 2017 Elite Eight and SEC championship team at Kentucky, has transitioned in year three from a talented young big man with potential to one of the game’s best forwards. He made his first NBA All-Star appearance in February, took home the NBA Skills Challenge trophy during All-Star Weekend in Chicago and was tabbed to the NBA All-Defensive Team earlier this month.

At age 22, the 6-9 forward concluded the regular season averaging 15.9 points, 10.2 rebounds and 5.1 assists per game to become the second-youngest player in NBA history to have a 15-10-5 season, trailing only Hall of Famer Oscar Robertson. He’s taken his game up another level in the NBA Playoffs, averaging 18.5 points, 11.4 rebounds and 0.9 blocks per game. After scoring a career-high 32 points vs. the Celtics to clinch the Eastern Conference Finals championship, Adebayo has posted seven games with 20 points and 10 rebounds during this postseason run, trailing only LeBron James’ Miami Heat run in 2012 for the franchise’s top mark, according to ESPN Stats & Info.

In his lone season at Kentucky, Adebayo averaged 13.0 points, 8.0 rebounds and 1.5 rebounds. He was tabbed to the All-SEC Second Team by both the media and the league’s coaches. He was also an All-SEC Freshman Team selection and a member of the SEC All-Tournament Team after helping lead UK to the crown. He registered eight double-doubles with the Wildcats before being selected 14th overall by the Heat in 2017.

Herro has been a force for Miami, epitomizing the toughness and clutch play of the young and talented Heat. With high-scoring nights, unwavering confidence and crunch-time shots, Herro has already evolved into one of the game’s bright young stars.

After going 13th overall in the 2019 NBA Draft, Herro averaged 13.5 points, 4.1 rebounds and 2.2 assists while making 38.9% from 3-point range in the regular season. He’s upped those splits to 16.5 points, 5.5 rebounds, 3.9 assists and 46.3% from the field during the Heat’s impressive run to the finals. If the world didn’t know him before last week, it does now after Herro scored 37 points in game five of the Eastern Conference Finals, becoming the younger player in NBA history to drop 30 points in a playoff game off the bench, according to StatMuse.

Herro, an NBA All-Rookie Second Team selection, was not only Kentucky’s second-leading scorer (14.0 points per game) and leading 3-pointer shooter (60 3-point field goals) during the 2018-19 season, he was one of UK’s most important pieces to its success. The Wildcats were 19-0 when Herro scored 15 or more points and 11-7 when he didn’t. In Kentucky’s 30 wins, he averaged a team-high 14.9 points, 49.5% shooting and 39.7% from 3-point range. Shooting 93.5% from the free-throw line, he not only set a new single-season school record for free-throw percentage but also for the SEC (with players between 50 and 100 attempts).

Vogel is in his ninth season in the league as a head coach after seven-plus seasons as an assistant. In his first season as the Lakers head man, he’s not only guided Los Angeles back to the playoffs for the first time in seven seasons, it’s the franchise’s first NBA Finals appearance since 2010.

The former UK staffer led the Indiana Pacers to the playoffs five times in his first head coaching opportunity, including twice to the Eastern Conference Finals. Five times he’s been named NBA Eastern/Western Conference Coach of the Month.

Riley also played nine seasons in the NBA as a player. As the team president for the Heat, he played a top role in drafting Adebayo and Herro, two of the cornerstones of Miami’s magical run. He is a member of the Naismith Memorial Basketball Hall of Fame.

As a Wildcat, Riley was a member of the 1966 national runner-up team. The All-American won SEC Player of the Year, UK’s first, in 1966, made the All-NCAA Final Four Team in 1966, and NCAA All-Region MVP honors while leading UK to the national championship game. Riley scored 1,464 career points, which ranked in the top five in school history at the end of his collegiate career. He averaged 18.3 points for his career and double figures in all three seasons played, including 21.9 during the 1966 season. Riley was selected in the first round of the 1967 NBA Draft by the San Diego Rockets.

Kentucky in the NBA

Kentucky has enjoyed unprecedented success at putting players in the NBA under current head coach John Calipari. In the 10-plus seasons of the Calipari era, 38 players have been selected in the NBA Draft, more than any other school. Included in the recent run are 29 first-round picks, three No. 1 overall selections (Davis, Karl-Anthony Towns and John Wall) and 21 lottery selections. A staggering 29 players from Kentucky were on NBA opening-day rosters (including two-way and inactive lists), the most of any school.  Thirteen former Wildcats were on rosters for the NBA Playoffs, which also led the country.

Calipari’s players are not only reaching the next level, they are succeeding when they do. His players have garnered 22 All-Star selections. Derrick Rose (from Memphis) was named league MVP in 2011. Five of his players have been tabbed All-NBA (Derrick Rose, Wall, DeMarcus Cousins, Davis and Towns), three have been named NBA Rookie of the Year (Rose, Tyreke Evans and Towns), and 14 players from Calipari’s first 10 teams at Kentucky have made the NBA All-Rookie teams. UK has produced more All-NBA players, more NBA All-Rookie and more NBA All-Defensive players than any other school in the Calipari era.

Using figures compiled by basketball-reference.com and spotrac.com, Calipari-coached players only (which includes Rose but not Rondo) have amassed more than $2.26 billion in career NBA contracts. In the 11 seasons Calipari has been the head coach at Kentucky, his players have totaled nearly $1.9 billion in NBA contracts.