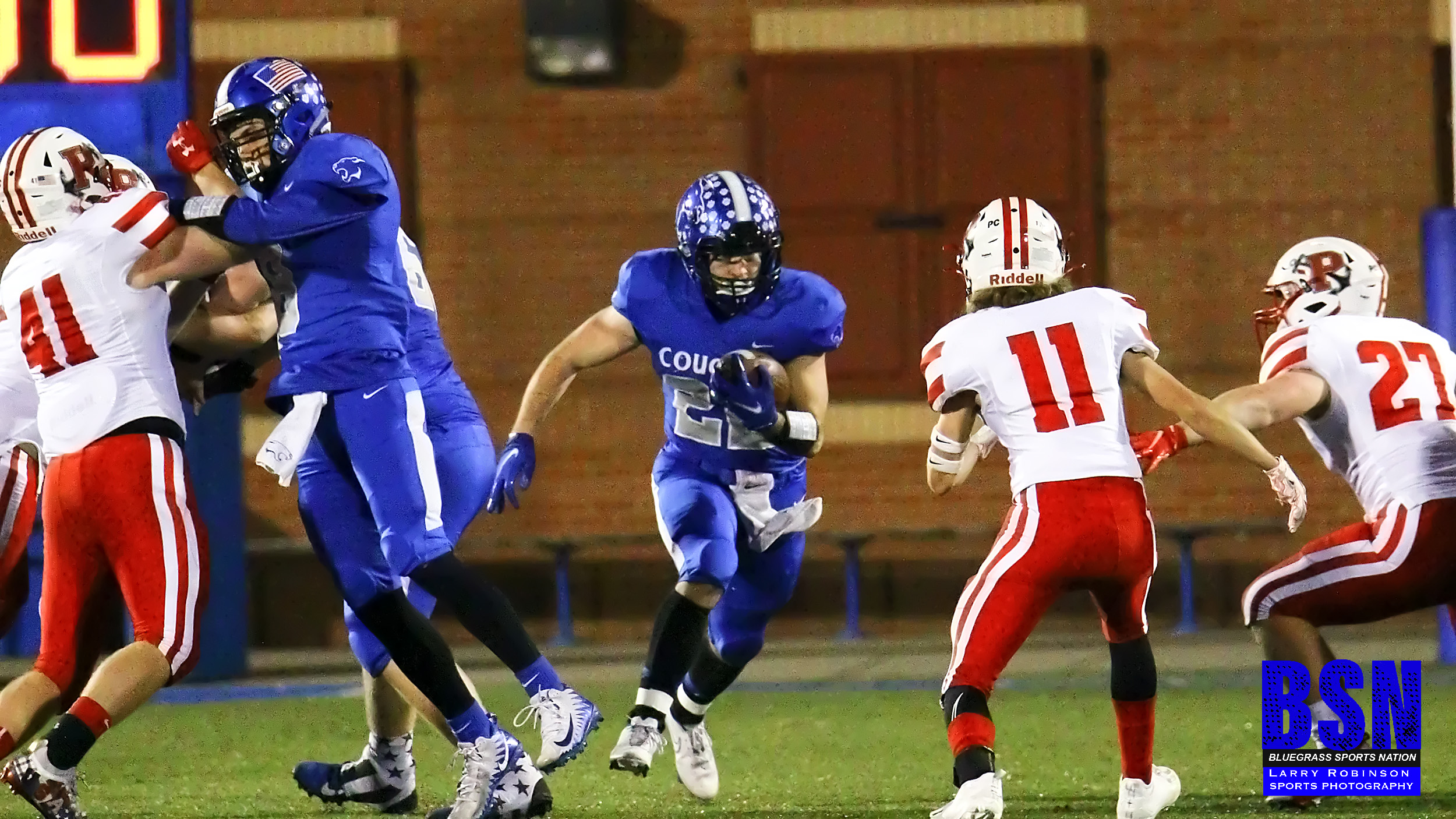 The KHSAA High School Football season resumed tonight with the opening round of the playoffs.  Perry County Central travelled to Whitesburg to battle Class 4A 8th District divisional opponent the Letcher County Central Cougars.  The two teams had one prior meeting on the season as Letcher Central defeated Perry 28-7 at Commodore Field during a week three matchup.

In the first quarter, Perry County Central was plagued by costly turnovers.  In total, the Commodores had three turnovers in the first three offensive possessions of the game.  Two of the turnovers were mishandled snaps leading to a fumble and the third was an interception.

Letcher Central moved the ball with ease with the combination of throwing through the air and running the ball.  On Letcher Central’s opening possession, the Cougars marched the ball down the field with impressive runs by #11 Isaac Matthews and #22 Hayden Brashear, setting the Cougars up in the RedZone.  The drive was finished off with a five- yard rushing TD by Brashear.  Letcher Central was unable to convert on the PAT and led Perry Central 6-0 at the end of the first quarter.

In the second quarter, Letcher continued to pound the ball with the rushing attack led by Brashear and #7 Sam Little.  The Cougars would score multiple unanswered touchdowns in the quarter and developed a comfortable twenty- four point lead by the half’s end.  Letcher Central’s offense struck early and scored quick.  On the opening drive of the quarter, Letcher’s Adams threw the ball down field finding WR #12 Alex Blair in stride with room to run.  Seventy yards later Blair scored with a seventy-yard receiving play.  Offensively the Commodores struggled to move the ball and were forced to punt deep on several possessions.  The Cougars scored twice more with a Brashear rushing touchdown and late in the quarter with a pass from Adams to Little.  At intermission, the Cougars led the Commodores with a commanding lead of Letcher Central 24 – Perry Central 0.

The third quarter continued with the Letcher County Central running the ball picking up several first downs and added to the lead with another Brasher rushing touchdown.  Perry continued to compete, and many seniors faced the reality of their high school career would end on Letcher Central’s field.

The Commodores were overmatched by a balanced and well coached Letcher County Central team.  Letcher continued to stop the run, and blitzed the defensive backs and linebackers making throws by Charles Mullins and Chance McKenzie look rushed and uncomfortable.  At the end of the third quarter Letcher led Perry 32-0.

In the fourth quarter, Letcher began to insert reserve players after the game’s final touchdown a rushing touchdown by #46 Koby Johnson.  With the score and Letcher Central now up by more than thirty- five points the game was finished with a running clock.  The Cougars go on to defeat the Commodores 39-0 and advance to the second round of the KHSAA Class 4A Football playoffs taking on defending State Champion and District Rival the Johnson Central.

Perry County Central’s gridiron season is now finished.  The Commodores finish the season with an overall record of three wins and six losses.  Throughout the year Perry County Central has experienced several memorable moments during the season.  On the opening night of the season the Commodores celebrated the Mark Dixon Era as the Head coach with an exciting victory hosting the Pike County Central Hawks 37-23.  In week seven of the season, Caeden Sebastian’s four defensive interceptions helped seal the win in a 32-24 district win against Clay County.  The next week the Commodores played their best all-around game defeating Harlan County 16-8 in another District matchup.