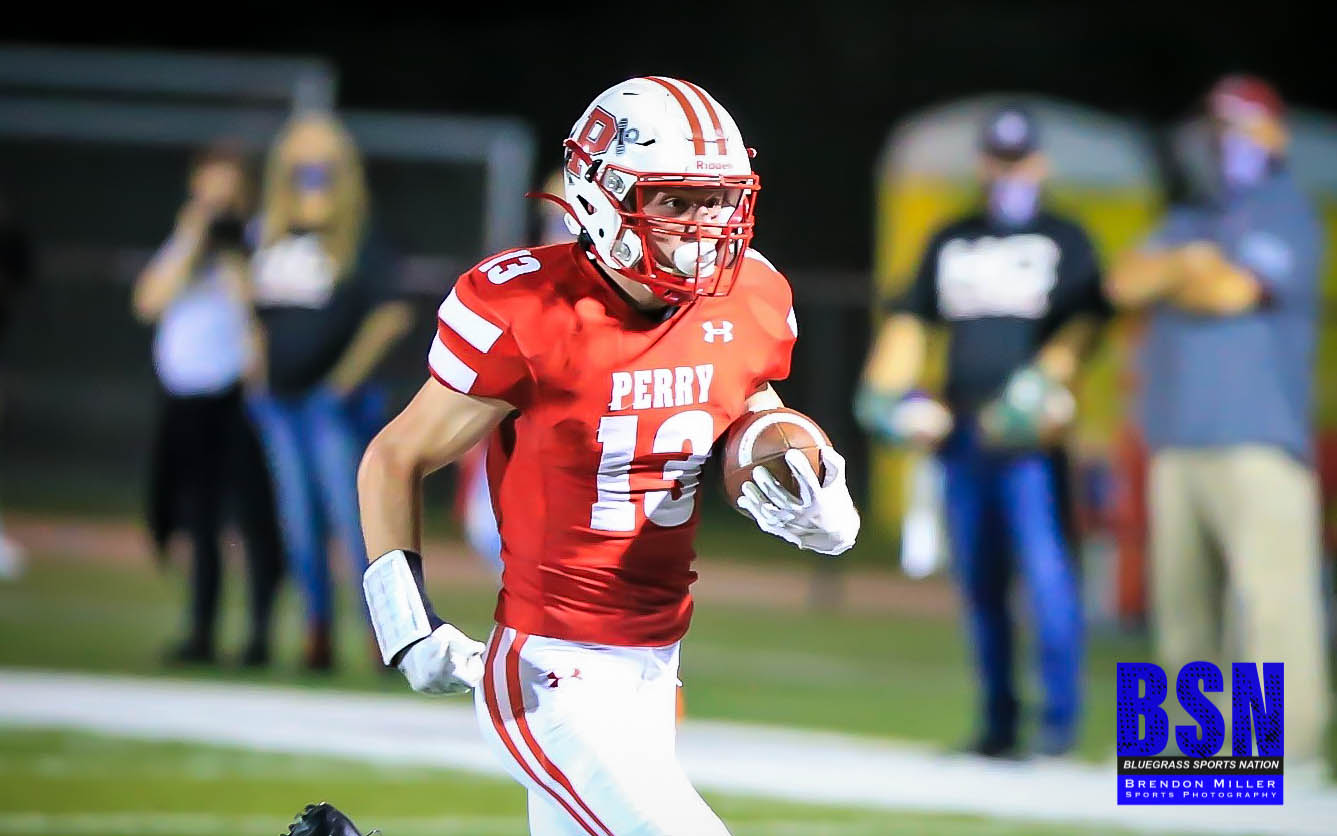 When he took over the Perry Central program in the summer, Mark Dixon knew he had to build from the ground up. Dixon put another block in that foundation on Friday night as the Commodores downed Harlan County 16-8 for their second Class 4A District 8 win in two weeks.

The Commodores came into the game at 2-4 while Harlan entered at 1-4.

Perry Central received the opening kickoff and put together a drive into Harlan County territory. Perry opened the scoring as Cade Miller stretched the Black Bear defense on a sweep left and got the corner to sprint 29 yards into the endzone. Brady Adams connected on the PAT and the Commodores led 7-0 with 9:30 left in the 1st Quarter.

The lead did not last long as Harlan took the ensuing kickoff and marched down the field. A big pass from Cody Clayborn to Gavin Ewald put the Bears in the red zone. The Bears cashed in on a one yard run by Josh Sergent to get on the board. The Bears took the lead on the conversion run by Tyler Flanary as he outran the Commondore defense to the left corner of the endzone.

At that point, it looked as though the game would be a shootout, but that would not be the case as the defense of each team stepped up. Harlan mostly controlled the ball for the remainder of the half driving deep into the Commodore end of the field a couple of times, but were unable to put points on the board. A combination of untimely penalties, a dropped pass, and some big defensive plays by the Commodores, kept the score at 8-7 at the half.

Harlan took the 2nd half kick and went on an eight-plus minute grind-it-out drive. The Bears punched the ball into the endzone, but the Josh Swanner run was called back for holding. Two plays later, Kobee Eldridge picked off a Clayborn pass to end the threat. On their next drive, Harlan again drove down into the Commodore red zone only to turn the ball over on downs.

Perry then mounted some offense for the first time in the half. Quarterback Chanse McKenzie hit Eldridge on a pass to the flat and he broke through the Bear secondary for a big gainer to give the Commodores momentum. McKenzie then hit Elijah Gayheart on a screen for another big gain down into Bear territory. The Harlan defense held, and Adams connected on a 33 yard field goal to put the Commodores in the lead 10-8.

It was then the Commodore Defense’s turn to come up with a big play, and they did, stopping the Bears on downs as Harlan went for a 4th down at their own 43. Clayborn’s pass fell incomplete and Perry took over.

Perry kept the ball on the ground on runs by Charles Mullins, Eldridge, Gayheart and Miller to the 10 yard line. Eldridge took it in in from there to increase the Commodore lead to 16-8. The PAT was no good, keeping the game at a one score margin.

On the ensuing kickoff, the Harlan player misplayed the pooch kick by Perry’s Hunter Chaney and the Commodores were able to recover. Perry was unable to run out the clock and Harlan had a final chance, but the Perry defense again held with the Bears turning the ball back over on downs. Perry took a knee for the win.

NEXT
Perry will travel to Williamsburg next Friday with an opportunity to increase their win streak to three.