Logano Tames the “Lady in Black” on Mother’s Day 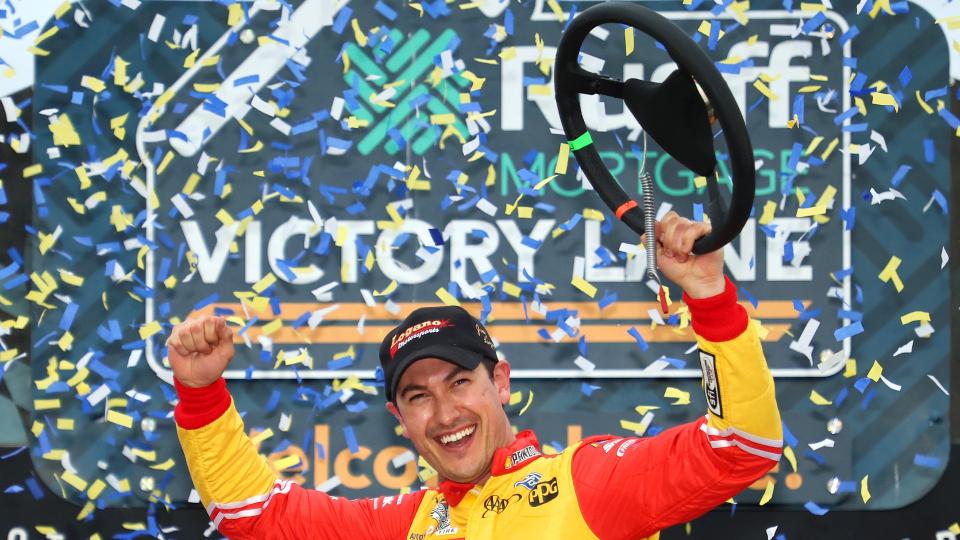 The unique oval, somewhat egg-shaped design and displays different Turn configurations. A condition which supposedly arose due to a local land owner refusing to relocate a local minnow pond resulting in the disconfirmation design of the Turns.

To tame the track, Race Teams must set accommodate these variables when setting and dialing in their car.

Penske Ford Driver Joey Logano will bring the race to green after winning the pole at the famed track which is characterized as “A NASCAR Tradition”.

With 33 laps remaining a collision involving Bubba Wallace, Kurt Busch and Martin Truex Jr. forced a caution in which would impact the outcome of the victor.

Hendricks’s William Byron followed the tire tracks of race leader Joey Logano as the caution flag flew.  After an aggressive restart, Byron edged into the lead with 24 laps remaining.

After relinquishing the point, Logano continued to close in, chipping away real-estate while advancing to the leader.

Setting sites on the leader, Joey Logano’s Last-Lap “Bump and Run” enabled an opening to regain the post.

Joey Logano guards off an advancing Tyler Reddick to win the Goodyear 400 at Darlington Speedway in South Carolina on Sunday.

Joey Logano led 109 of the 293 laps and marks his first Checker Flag since winning on the dirt at Bristol in 2021.

Kyle Larson whom contended early in event, drove his way to the front row only to be stricken with engine issues.  Forcing the reining NASCAR Cup Champion to the garage in Stage 2 and out of any positive finish.

Brad Keselowski earned his Darlington Stripe after slamming into the wall in front of Kyle Bush.  The domino confrontation obstructed the handling of Kyle Bush’s Toyota to contend with The Lady in Black.

The NASCAR Cup Series travels to Kansas Speedway, Sunday May 15, 2022 for the :