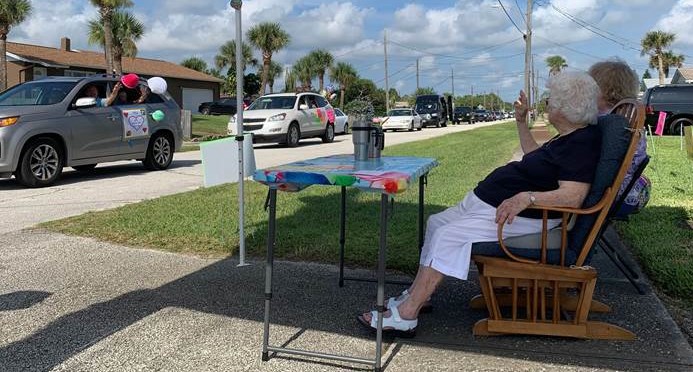 Part of Track Since it was Built in 1958, and the first DAYTONA 500 in ‘59, the American Icon Continues to Work in DIS Ticket Office

Juanita ‘Lightnin’ Epton, whose warmth and kindness to others has made her part of the fabric of Daytona International Speedway – and an American icon – celebrated her 100th birthday Wednesday.

A member of the Speedway’s ticket office operations at the storied 2.5-mile track since 1958 when the “World Center of Racing” was built by “Big Bill” France, ‘Lightnin’ was greeted in her front yard by a parade of more than 100 vehicles. The parade, which was led by a police escort and included a couple vintage race cars, drove by and showcased countless well wishes via homemade posters, shout outs, blowing horns and the singing of “happy birthday.”

“I am absolutely overwhelmed,” said Epton, who actually sold tickets part-time to NASCAR events on the Daytona “beach/road course” in the mid-1940s through 1958, prior to the first Daytona 500 in 1959. “It’s just wonderful. I never saw so many friends at one time. It’s great. So nice of people to take time out to say happy birthday. I really appreciate it more than you know. The fact that so many people took time out of their day and came to wish me happy birthday means a lot. It brings tears to my eyes that so many people care.

“I am looking forward to getting back to the office, and counting and mailing tickets. I cannot hardly wait. I really appreciate today, but I am ready to get back to work.”

A host of NASCAR and Speedway employees were also part of Wednesday’s parade, including NASCAR Chief Executive Officer Jim France, whose father “Big Bill,” founded NASCAR in December of 1947. In addition, Daytona Beach Mayor Derrick Henry was on hand to send his well wishes to Epton.

“So many race fans come to the track and ask for ‘Lightnin,’” said Chip Wile, President of Daytona International Speedway. “She comes to work every morning and gets down to it. She is literally the hardest working human being I know. She always has a smile and is so caring. She gives you hugs and wants to know how you are doing.

“She has been a staple of Daytona International Speedway since its inception. To see where the track came from to now being one of the most iconic tracks in the world, and to know she has been a part of it every step of the way, I am so honored to work with her.”

Epton’s late husband, Joe, was NASCAR’s first timer and scorer, from 1947-85, which took him all over the country to more NASCAR races than nearly anyone. The couple had first met “Big Bill” at the fairgrounds in Spartanburg, S.C., in 1945, where Joe was scoring races. While having worked the Daytona beach/road course events prior, they moved to Florida when France began building Daytona International Speedway in ’58, and ‘Lightnin” started working at the ticket office alongside Anne B. France, Big Bill’s wife.

“The France family has meant so much to me over the years,” said Epton. “I would do anything I could for them because they are tops. Bill Sr. told me years ago that as long as I wanted to work I could – and I’ve taken him up on that offer.”

Epton has always believed her place was in the ticket office, and had never seen a DAYTONA 500 in person until 2018 when she watched a portion of the event from a suite. An institution at the track for more than six decades, NASCAR’s oldest employee and Grenada, Miss., native says she has no plans of stopping, and is looking forward to the track hosting two August NASCAR race weekends in which a limited number of fans will be allowed to attend selected events.

“I have no intention of retiring,“ said Epton, who says her nickname ‘Lightnin” was given to her by Joe, who said when they first got married, he never knew when and where she’d strike. “When people retire, they get stale, and I am not getting stale. I am going to work as long as I can. I love the people I work for, and it’s a nice place to work. Until they tell me otherwise, I am going to stay.”

The limited number of fans for both weekends is in accordance with public health officials and local, state and federal authorities on amended safety protocols and procedures that will provide a safe experience for all fans in attendance.

The DAYTONA Road Course weekend will also consist of the ARCA Menards Series on Friday, Aug. 14 (MAVTV, 5:00 p.m. ET), as well as the NASCAR Xfinity Series on Saturday, Aug. 15 (NBCSN, 3:00 p.m. ET). Both events will be held without fans in attendance. The Xfinity Series will also make a return trip to challenge Daytona’s 2.5-mile trioval layout with no fans in attendance during the Wawa 250 Powered by Coca-Cola on Saturday, Aug. 28 (NBCSN, 7:30 p.m. ET).