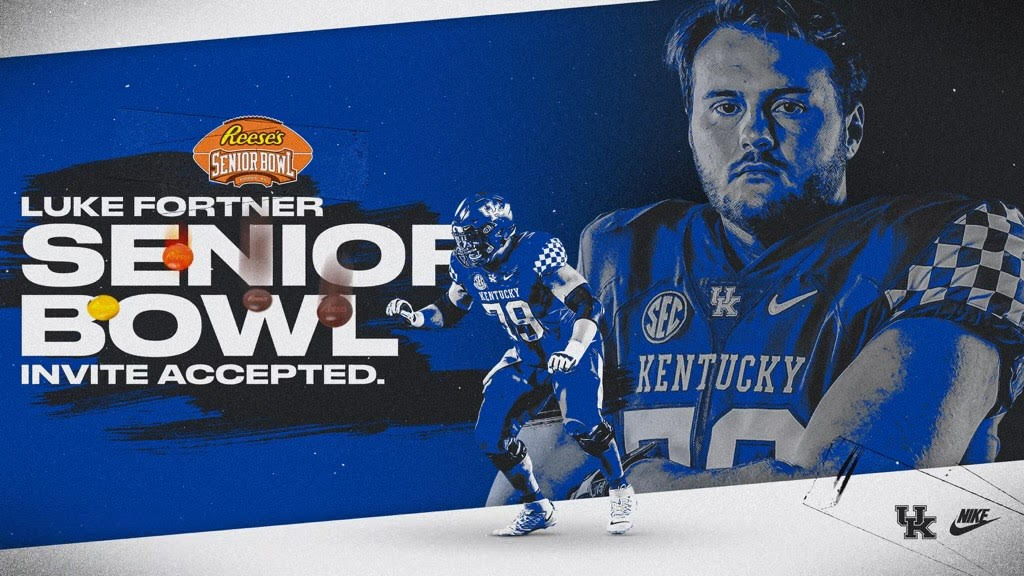 Game is slated for Feb. 5 in Mobile, Alabama

Senior center Luke Fortner has accepted an invitation to play in the Reese’s Senior Bowl slated for Saturday, Feb. 5 at 2:30 p.m. ET at the University of South Alabama, Hancock Whitney Stadium in Mobile, Alabama.

Fortner, who also received an invitation to the East-West Shrine game, will join safety Yusuf Corker, offensive tackle Darian Kinnard and defensive lineman Josh Paschal on the American roster. The four Wildcats are the most representatives at the Senior Bowl since five were invited in 2007 (Rafael Little, Jacob Tamme, Andre’ Woodson, Wesley Woodyard and Keenan Burton). UK now has 46 all-time members.

The 6-foot-6, 297-pound “super senior” from Sylvania, Ohio, was a two-time Campbell Trophy semifinalist who played in 54 career games for Kentucky. After switching from right guard to center prior to the season, Fortner found his niche, excelling in his new role on the “Big Blue Wall.” He graded at 84.5 percent for the 2021 season, including 19 knockdown blocks.

Under Fortner’s leadership on the line, the Wildcats’ offense averaged 425.2 total yards per game in 2021, including 199.5 on the ground, and averaged 6.41 yards per play, the second-highest average in a single season behind 6.45 in 1998 with Tim Couch at the helm of Hal Mumme’s “Air Raid.” The Wildcats posted a 10-3 record, capped by a Vrbo Citrus Bowl win over Iowa.

During his six seasons with the Wildcats, UK posted a 45-29 record and advanced to a school-record six straight bowl games, highlighted by winning the last four in a row, another school record.

The Reese’s Senior Bowl has long been the nation’s most prestigious college all-star game because it is the only one coached by entire staffs from two National Football League clubs. This year’s game has been assigned to the coaching staffs of the Carolina Panthers and the Miami Dolphins.