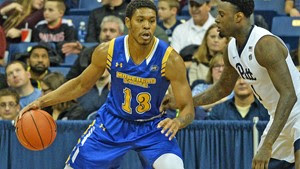 PITTSBURGH, Pa. – Senior DeJuan Marrero led the way with 18 points and 13 rebounds as Morehead State men’s basketball fell 76-63 at Pittsburgh on Friday night.
With the loss, the Eagles move to 2-3 on the season while Pitt improves to 5-1.

“That’s a really good Pittsburgh team, but I’m just really proud of our guys, given the circumstances and how they fought and how they played,” said interim head coach Preston Spradlin.

Morehead State went into the locker room at half trailing, 42-26, after Pittsburgh knocked down 9-of-12 from three-point range. The Eagles shot just 1-of-11 from deep in the first stanza.

The Eagles then responded by going on a 21-11 run, holding the Panthers scoreless over a four minute stretch, and trimmed the lead to 59-52 on a three-pointer by sophomore Malik Maitland with 6:57 to go.

But, Pittsburgh recorded two consecutive offensive rebounds on the next possession, which they converted into two made free throws. Then, a turnover by Maitland led to a three-pointer by Cameron Jones on the other end, extending the Panthers’ lead back to 64-52 with 5:46 to go and they went on to win by 13.

Marrero’s double-double was the ninth of his career. He shot 8-of-13 from the floor and his 13 rebounds marked a game-high. He played all 40 minutes.

“(DeJuan) Marrero had 18 points and 13 rebounds, but his best stat of the night was that he had just had two fouls,” said Spradlin. “He played 40 minutes, which is maybe too much, but he was one of the best players on the floor because he didn’t foul. He had discipline and he moved his feet and he kept his hands up.”

Maitland finished with 16 points, 14 of which came in the second half. He shot 5-of-11 from the floor and 4-of-9 from three-point range. The 5-foot-11 guard also added four rebounds.

Senior guard Xavier Moon was the third Eagle to finish in double figures with 15 points on 5-of-17 shooting. He was just 1-of-9 from three-point range.

After shooting 9-of-12 from three-point range in the first half, Morehead State limited Pittsburgh to just 2-of-7 shooting from deep in the second half.

Overall, the Panthers shot 49 percent for the contest, while the Eagles shot 38 percent.