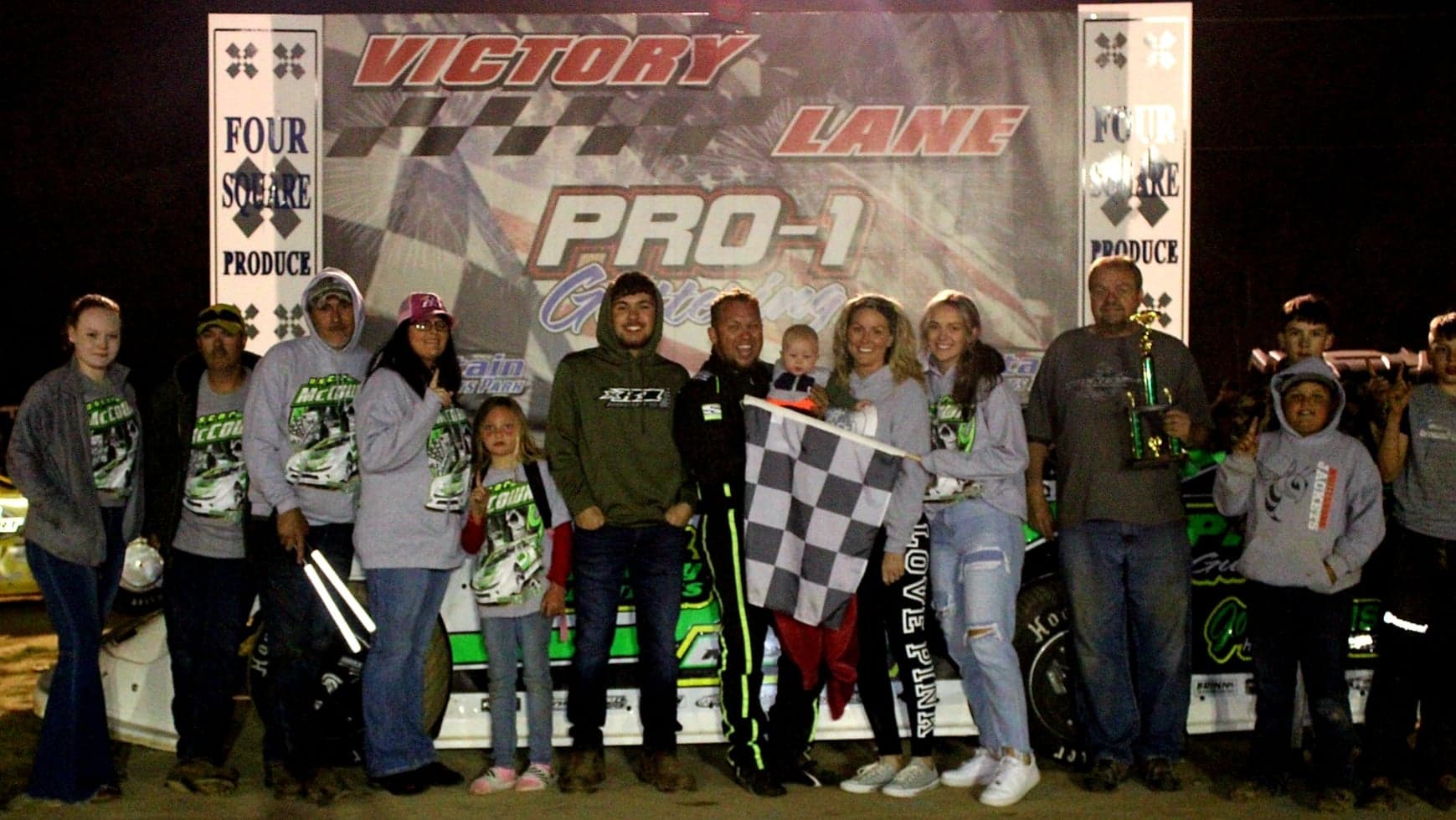 Daniel Stamper, AKA the Cowboy, rode into the winner’s circle in the Bombers Feature for his second and third victories of the season.   Stamper captured the 2021 Battle of the Bombers for a $1000 payday.  The #62 team won the first feature on the night and had to then start in the last spot of the second feature of the night and successfully worked his way through the field for the win.  Last year’s track champion Racin Tim Mason finished second in the first feature followed by Marcus Griffith who came away third.  Mason set fast time in the bombers qualifying that was sponsored by Allsouth Graphic & Signs and J and J Auto.  In the second bomber feature Stamper would be followed by Tyler Griffith and Sammy Deaton.  Nick Mason had a strong showing in the second feature after leading several laps and finished fourth, as his father Tim Mason rounded out the top five.

Justin King followed his second place Crate Model run with a win the Homeotwn Sports Corner Limited Late models.  King dominated his Late Model feature as his #9 car was fast the entire night.  The winner from two weeks ago, Garrett McCloud captured the second place finish, while Beadie Blackburn has his best finish at the Park in the Limiteds with a third place finish.  Hall of Famer, Jackie Fields was fourth and Brad Sturgill was fifth.

Being the son of a Hall of Fame and legendary racer is normally a fun thing, but being that son and trying to run his race car number, well no one knows that challenging role any better than Hunter Feltner.  But Friday night the second generation Hazard, Ky driver made a name for himself as he drove the #101 to the winner’s circle himself.  Feltner was fast from the opening laps and lead flag-to-flag to capture the win.  Last week’s winner, Brandon Hutchinson had another very fast car as he finished second in front of Perry County’s Jamie Maggard.  Andy Mason finished fourth in front of Daniel Webb and Larry Banks.  Feltner’s win comes at a huge time as his class will run twin features next weekend with the winner earning an extra bonus pushing thier top prize to a $1500 should any driver be able to win both of the Four Square Produce Open Wheel features.

Mike Breeding and Brandon Keen had one of the most exciting battles for the win Saturday as the two ran lap after lap switching leads and trying to run away from each other.  Breeding would lead the final lap to get the East Ky Gravel 4-cyl win.  Aaron Baker finished third, while fourth generation driver Travis Hall finished fourth.  In the second feature of the night, Colby Busch finished second but picked up the win after the winner chose to forgo his winnings and points after his car was claimed in the winner’s on Saturday night.  Shawn Stamper finished second and Marty Bates finished third.  Timothy Hurt and Nathan Honeycutt round out the top 5.

After taking the week off last week, Garrett McCloud picked up where he left off as he won the Shelby of Vicco’s Sport Mods Race.  Josh Sexton drove his #13 machine to a second place finish and the current points leader Tony Sizemore finished third despite having engine troubles late in race.  Shane Yates and Oscar Marshall finished fourth and fifth.

Fans dont miss the season’s first bigger Modified race this coming Friday night as MMP returns to Friday night racing and mark your calendars for the following weekend as the American All-stars Crate Late Model come to MMP for the 2nd annual Ky Burner.  Be sure to tune into Hometown Sports Corner this Thursday @ 930 on facebook live.

Additional notes you are free to use in your publication should you have a need.