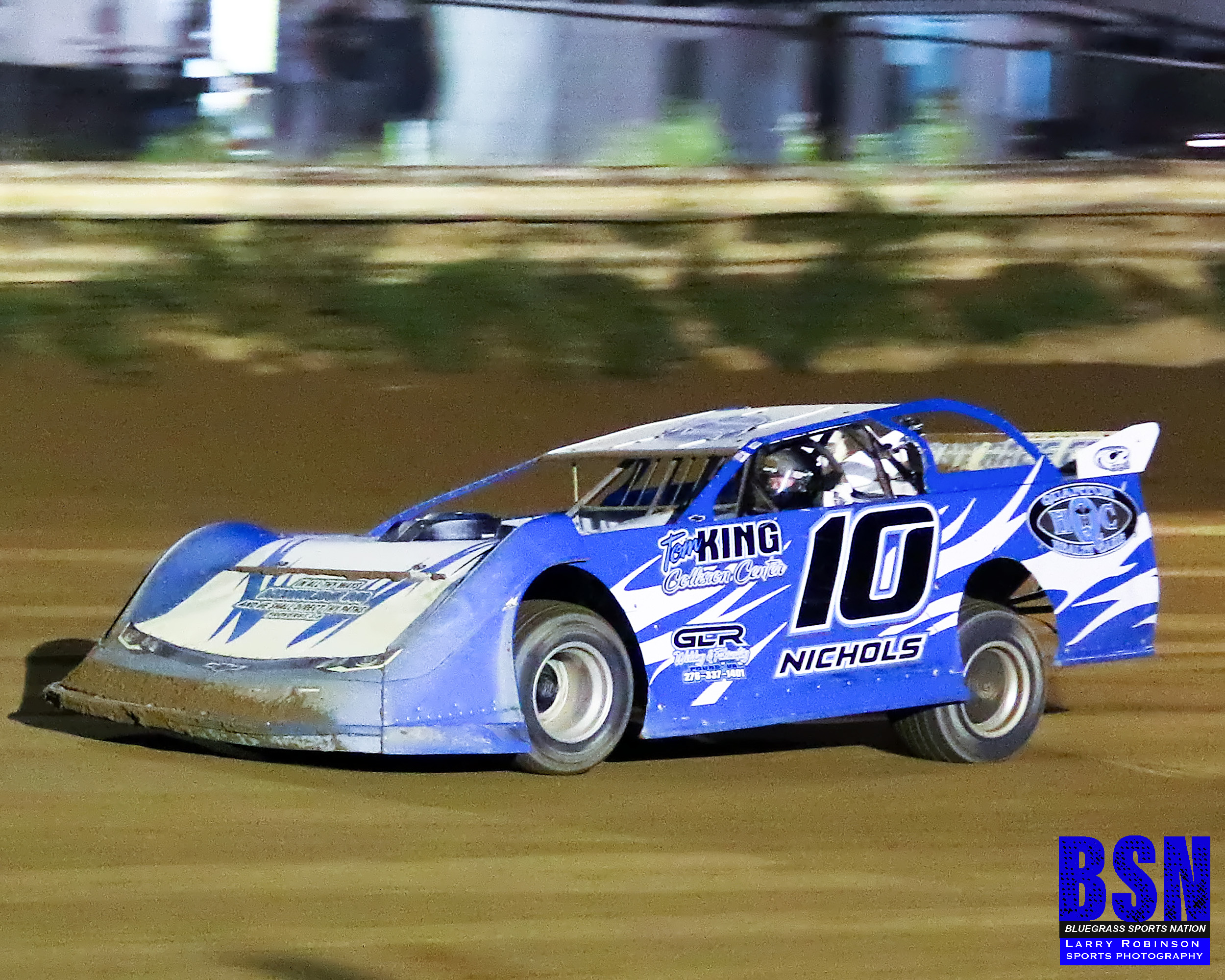 To say this has been a year of firsts for Mountain Motorsports Park this year is no doubt an understatement. But this past Saturday night was yet another first, as we held 9 different feature races for the race fans in attendance.

The current ACAS Weekly points leader and MMP track championship points leader Raymond Nichols captured another big win this past Saturday night. Nichols drove his #10 Late Model to the Pro-1 Guttering winner’s circle after passing the fast qualifier and heat race #1 winner Jody Adkins. Adkins had a strong running car all night and finished third behind Nichols who held off Adkins and Oscar McCowan who debut his new #1 Late Model in second place feature run. Justin King and Steve Martin would round out the top 5, as Rocky Moore, Jackie Fields, and Collin Watson would complete the rest of the running order.

In the Limited Lates, Corey Brock had a strong showing the early stages of the race, before veteran driver Anthony Adams would get around him and post an impressive win. Brock would finish second and Knott County’s David Fields finished third in the 192 car.

Dustin Mosley set fast time in Open Wheel Mod division and went on to win the first of two heat races for his class. The win set him up with a match-up against the winner of the other heat race Andy Mason. In the feature, it would be Mason winning with Mosley running a close second. Another Knott Countian Brandon Coleman had his best run of the season as he finished third. Nathan Honeycutt, JJ Brock, and Hunter Feltner finished fourth through Sixth, with Jeremy Sears, PJ Lemaster, James Crowe, and James Grigsby rounding out the running order. With the win Mason becomes the new Hometown Sports Corner Points leader.

Jacob Hall set fast time once again in his 43j with an impressive time of 17.06. But it would be Shane Yates’ night to shine as he won both Sport Mod Twin Features. In the first feature, he held off a hard charging Daniel Webb who finished second and #19 Darren Slone who ran third. Christian Crider and Caleb Howard would round out the top 5 in the 11 car feature race. In the second feature Yates’ win would come after he was able to hold off Jacob Hall who came from the back of the field to finish second. #72 Daniel Webb finished third in that feature.

It seems like you cant say Bomber and winner in the same sentence without it also having Tim Mason’s name somewhere in there as well. This past weekend proved to be more of the same as he also won both of his features this past Saturday night. Mason started the night off right with a qualifying time of 18.01 which was 8 tenths faster than any other competitor. He had dominating win in the first feature with Marcus Griffith and Eddie Griffith finishing second and third in a awesome race between the two competitors. Danny Fields, Dakota Sheppard, and Cody Bentley would round out the finishing order in the first feature race. Again it would be Mason taking his #45 Bomber to the winners circle in the second feature with Eddie Griffith getting second in this one, while Marcus Griffith would run third in the second feature. Danny Fields finished fourth.

Jonathon Fields entered the night leading the points in the MMP 4 Cylinder division and got off to a good start as he set fast time of the night with a 20.31. But the $500 feature win went to #13 Justin Lawson. Lawson used a strong start on the opening lap that was began three wide in route to his checkered flag. Larry Jerrel finished second and Scott Holland was third. Donald Johnson and Dwight Issaac would round out the top 5 in the 16 car feature race.After a couple months of being absent from the track, the KDRA series returned to Isom Ky this past weekend as #62 Daniel Stamper pulled off the tri-factor after setting fast time with a 17.33 before winning his heat race and feature. Jason West and Bartley Grant finished second and third in the seven car feature race.

Up next for the historic race track is the 2020 FAN APPRECIATE NIGHT. In addition to general Admission tickets being only 10.00 fans will be entered into free drawings, and be allowed to go track side to take pictures and get autographs from their favorite drivers. The Ladies will also be added to the racing action as they’ll race in the Powder Puff 4 cylinders. As always children 12 and under get in free and racing will begin around 8pm this Friday night.