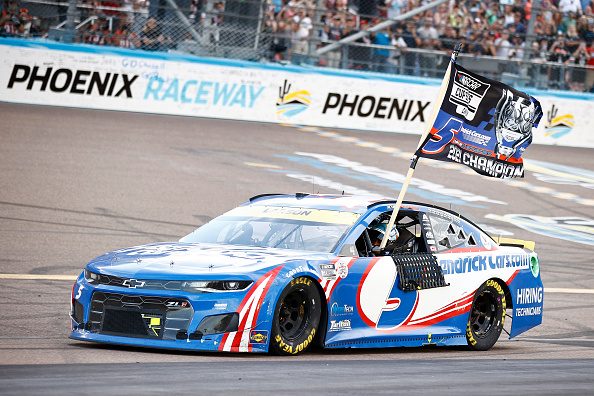 The 2021 NASCAR Cup Series season is set to come to a close. The 1-mile track of Phoenix Raceway hosted the NASCAR Cup Championship 4 finale in Arizona.

Kyle Larson brought the field to green and struggled throughout the Stages attempting to keep pace with the Championship 4 contenders….. Until the moment which defined Yung Money’s season.

The Hendrick’s No. 5 race team would perform a pristine pit service checking off the 2nd best of the season winning the race off pit row for Larson.  Kyle Larson collected 2,581 laps during the 2021 NASCAR season, none as valuable as his final lap at Phoenix.

Joe Gibbs Racing teammate contender’s Martin Truex Jr. along with Denny Hamlin had a noticeable advantage over the Hendrick Motorsport’s participants (Larson , Elliott) during the final stage after long tire run segments.  An untimely and unexpected caution flag with fewer than 30 laps to go and would be a contributing factor of the outcome of the race.

Taking advantage of fresh Goodyears, Kyle Larson muscled this way to the front as Martin Truex Jr. approached in his rear view mirror. The driver of the No. 5 continued to hold the advantage as the laps checked off, guarding the post, crossing the finish line just in front of a hard charging Martin Truex Jr.

The 2022 Season will officially kick off with the running of The Great American Race – the Daytona 500 – at Daytona International Speedway on Feb. 20 live on FOX – an event that will also host the regular-season points-race debut of the Next Gen race car.

The Clash – NASCAR’s prelude event to the Daytona 500 since 1979 the non-points race will be showcased to the iconic Los Angeles Memorial Coliseum on Feb. 6, 2022