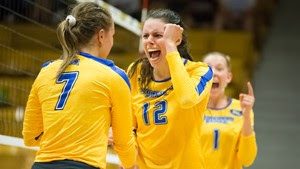 The Eagles are now 7-4 and have swept all four teams they have played from the Mid-Eastern Athletic Conference.

A strong start set the tone as the Eagles landed 11 kills and committed just one error (.400 attack percentage) in the opening set. Morehead State eventually cooled down to a .261 efficiency for the match but held the Spartans to just a .074 effort on offense. “I was very pleased with the intensity and focus we started the match with. Our offense was balanced, and we were doing a good job creating three-option transition opportunities,” said head coach Jaime Gordon. “Credit Norfolk State for coming out and playing exceptional defense in the second and third sets. I would have liked to see us match their intensity. We have to keep our offense balanced in order to be successful tomorrow. I was pleased with the composure our team showed down the stretch to get us the sweep.”

Freshman outside hitter Lauren Rokey again led the way, putting down 10 winners and also coming up with seven digs. Fellow freshman Olivia Lohmeier, a middle/right-side hitter who leads the Ohio Valley Conference in hitting percentage, kept her numbers intact with seven kills and zero errors for a team-best .583 attack total.

MSU’s service game also shined with seven aces, including three by Rokey. On the defensive end of things, junior middle Jessie Wachtman led the way up front with four blocks. Sophomore libero Danielle McCarson totaled 11 of the Eagles’ 37 digs. NSU did hold the edge on the back row with 42 digs.

The second set turned in Morehead State’s favor after it found itself down 10-7. Six straight points gave the Eagles a 13-10 lead, including four Spartan attack errors. NSU did rally and led twice late, but the Eagles scored five of the last six to win it. McCarson had a pair of aces in the final scoring flurry.

Set three was similar to its predecessor, and again it took a late rally for the Eagles to secure the sweep. Morehead State scored five of the final six points. Lohmeier, Rokey and Jones landed winners to clinch the win.

The Eagles have a pair of matches Saturday in Pennsylvania. They’ll face Bucknell at 11:30 a.m. ET and the host Red Flash at 4 p.m.