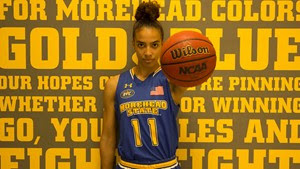 “We are thrilled to add Crystal to our program. She brings great athleticism, versatility, length and high level experience to our team. Her tenacious defensive ability will make her a standout in the OVC,” said head coach Greg Todd.

Simmons comes to Morehead State from St. John’s, where she played in 97 games in three years, including six starts. As a sophomore, she helped lead the Red Storm to a Big East championship and a trip to the NCAA Tournament, where they faced Auburn.

A native of Madrid, Spain, Simmons attended Life Center Academy in Burlington, N.J. She helped lead the Warriors to a National Association of Christian Athletes (NACA) Championship in 2013 and was named to the NACA All-Tournament team.

“She is a proven winner and competitor who has played on multiple championship teams. On top of her accolades, Crystal is a person of high character who believes in the direction our program is headed,” added Todd.

Simmons was named Life Center Academy MVP in 2012 and 2013 and was the 24th ranked guard coming out of high school in 2014, per ESPN HoopGurlz.

When she makes her debut on the court in 2018-19, she will be the highest rated player to play for Morehead State.

Morehead State finished 21-10 a year ago and made the program’s first ever appearance in the Women’s National Invitational Tournament. They went 11-5 in Ohio Valley Conference play, which ranked second in the league.