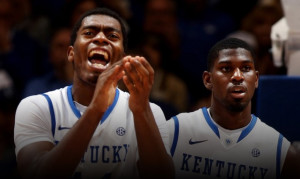 Johnson was a first-team honoree, while Poythress earned second team

Johnson, a member of the Oklahoma City Blue, started all 49 games this season. He averaged 18.5 points, 7.9 rebounds and 2.3 assists per game, while shooting 55.7 percent from the floor and 68.4 percent from the charity stripe. A 2016-17 D-League All-Star, Johnson enjoyed a breakout season becoming one of the league’s most dominating post presences. He notched career highs in points (31) and rebounds (11) on April 19 against Rio Grande Valley during the playoffs.

The Brooklyn, New York, native was the league’s seventh-leading scorer and its fifth-leading rebounder. Johnson produced 29 games with 20 or more points, along with 17 double-doubles. He led the Oklahoma City Blue to the semifinals of the NBA D-League playoffs, averaging 24.8 points and 10.0 rebounds a night. Johnson scored 24 or more points in five of six playoff appearances and had four double-doubles.

A two-year player at Kentucky, Johnson was a member of two teams that advanced to the Final Four. Johnson was a vital member of the 2014 team that appeared in the NCAA Championship game where UK started five freshmen. In 2015, Johnson and company set an NCAA record by winning their first 38 games of the season. He averaged 5.8 points and 4.3 rebounds in his career, while playing in 78 career games before being drafted 48th overall by the Oklahoma City Thunder.

Poythress was a D-League All-Star in his rookie campaign with the Fort Wayne Mad Ants before signing with the Philadelphia 76ers on April 11.

While with the Mad Ants, Poythress averaged 18.5 points, 7.1 rebounds and 1.5 assists per game. He shot 52.7 percent from the floor, 40.3 percent from 3-point range and 78.3 percent from the free-throw line. The Clarksville, Tennessee, native poured in a career-high 35 points on Jan. 12. He scored 20 or more points on 21 occasions and had 10 double-doubles for the season.

After earning a call-up to the NBA, Poythress made the most of his opportunity. In eight games with the 76ers, Poythress averaged 10.7 points and 4.8 rebounds per game and connected on 46.3 percent of his field-goal attempts. Against the Indiana Pacers, Poythress drained five 3-pointers for 15 points before concluding the season with a career-high 18 points in 32 minutes against the Knicks.

A four-year player for the Cats, Poythress became John Calipari’s first Academic All-American during his senior season. He played in 112 career games and averaged 8.6 points and 5.3 rebounds. He was a member of two Final Four teams and was Southeastern Conference All-Freshman Team selection in 2013.

All-NBA teams and honors will be announced later this spring.