No. 11 Kentucky Back on the Road Sunday at LSU 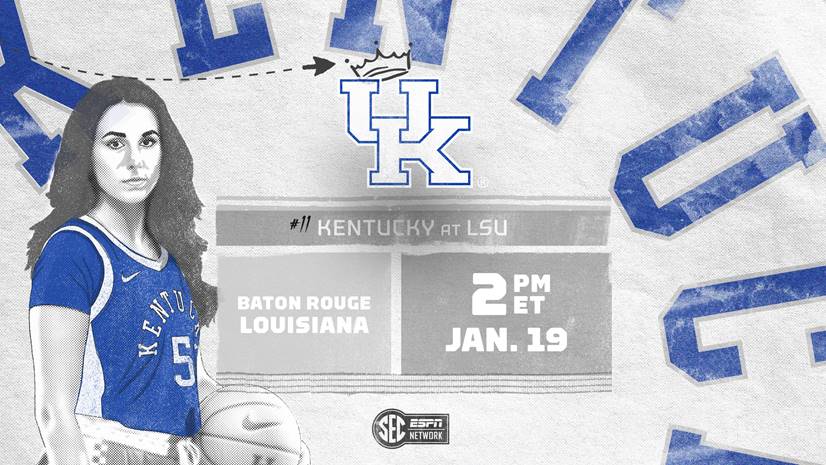 LEXINGTON, Ky. – On the heels of an impressive victory Thursday night over No. 12 Texas A&M, the No. 11 University of Kentucky women’s basketball team puts its four-game Southeastern Conference winning streak on the line Sunday when it travels to face LSU at 2 p.m. ET inside the Pete Maravich Assembly Center.

The game will be broadcast on SEC Network with Tiffany Greene and Mike Thibault on the call. The action can also be seen through WatchESPN on computers, smartphones or tablets. Darren Headrick will have the call on the UK Sports Network on 630AM WLAP in Lexington. Live stats and free live audio will be available online at UKathletics.com.

It was another fun night in Memorial Coliseum on Thursday for Kentucky (15-2, 4-1 SEC) who used a balanced effort to earn the win over No. 12 Texas A&M – UK’s first win over a top-12 ranked team since 2015-16. After a slow start offensively, UK scored 21 points in the second quarter thanks to some big shots by sophomore Blair Green, junior Chasity Patterson and senior Sabrina Haines as leading scorer Rhyne Howard was on the bench due to foul trouble. Howard returned in the second half and scored 16 points to lead Kentucky with 24 for the game, including 11 rebounds for her third double-double of the season. Green tied a career high with 13 points in the game hitting three 3s while Haines scored 15 points and also hit three 3s. The Wildcats hit 11 3s in the game – the ninth time this season they have hit 10 or more 3s. Defensively, UK limited TAMU to a season-low tying 54 points with the Aggies hitting just 37.3 percent from the field playing without their leading scorer Chennedy Carter.

Howard, a candidate for national player of the year, leads Kentucky in scoring and rebounding this season with 23.8 points and 6.1 rebounds per game. The native of Cleveland, Tennessee, has a team-best 37 steals this season and ranks third on the team with 43 assists. Howard leads the nation in points scored this season with 405 while she ranks second in points per game and is top-10 nationally in 3-pointers made and 3-pointers made per game. Haines is second on the team in scoring with 10.6 points per game and ranks 10th nationally in 3-point field-goal percentage at 45.5 percent. Haines is 35-of-77 from long range this season adding 32 assists and 23 steals. Junior guard Chasity Patterson has played in each of the last six games after missing the first half of the season due to NCAA transfer rules and is averaging 10.3 points per game, while senior guard Jaida Roper leads the team in assists with 58 averaging 7.0 points per game.

Sunday concludes a difficult road stretch for the Wildcats, who have played five of their last seven games away from Lexington. The stretch started with its game at Cal before starting league play at South Carolina. After winning its SEC home opener vs. Tennessee, UK hit the road for back-to-back games at Alabama and at Florida. Kentucky hosted its second conference game Thursday vs. Texas A&M and will return home after a bye date Monday, Jan. 27 to face Auburn at 7 p.m. ET inside Memorial Coliseum.

LSU will be holding its annual We Back Pat game Sunday. We Back Pat Week is celebrated by all 14 teams in the SEC, and many other basketball programs around the world take time to observe the occasion. The initiative, which utilizes promotional public address announcements, video endorsements and television exposure to share a very important message, focuses on raising awareness of Alzheimer’s disease and The Pat Summitt Foundation’s role in fighting it. The visibility that the SEC brings with the annual week gives the Foundation and its mission national attention to help eradicate Alzheimer’s, which prematurely ended the career and life of the greatest coach in women’s basketball, Tennessee’s Pat Summitt.

LSU (13-4, 3-2 SEC) is coming off a nail-biting loss at top-10 ranked Mississippi State on Thursday, nearly coming back from a 20-point deficit to upset the Bulldogs. The Tigers had a chance to tie the game late but could not convert eventually falling 64-60. LSU started conference play with a win vs. Alabama before falling at Missouri 69-65. The Tigers then won back-to-back games, including a 57-54 victory at then-No. 10 Texas A&M before Thursday’s loss to Mississippi State. LSU is 7-1 at home this season with the only loss coming to then-No. 12 Florida State, 70-62.

LSU leads the all-time series against Kentucky in women’s basketball 17-33, including a 14-5 mark in games played in Baton Rouge, La. UK has won five of the last six games against the Tigers including two straight games in Baton Rouge. MM is 10-9 all-time vs. LSU. After the Tigers won 16 straight meetings between the two teams, UK has won 10 of the last 15 meetings. Three of the five all-time wins for UK at LSU have come under Mitchell.

Last year, the two teams met twice with the Wildcats winning both games. UK won at LSU 64-60 on Jan. 17, 2019 before a 57-52 victory over the Tigers in Lexington on Feb. 24. UK was shorthanded in the game at LSU as Howard and Taylor Murray did not play due to injury. Maci Morris led UK with 20 points with Roper scoring 10 points. UK shot 51 percent from the field in the game. Aifuwa and Mitchell were strong in the post in the game combining for 33 points and 19 rebounds. The rematch in Lexington was also a close battle. Murray led UK with 18 points while Howard scored 12 points and Wyatt scored 12 points with five rebounds. UK shot 36.7 percent from the field and just 3-of-10 from 3. LSU scored 30 points in the paint with Mitchell scoring 19 points with 11 rebounds while Aifuwa scored nine points with 13 rebounds.