No. 15 Kentucky Surges to 7-1 Win Over Wright State 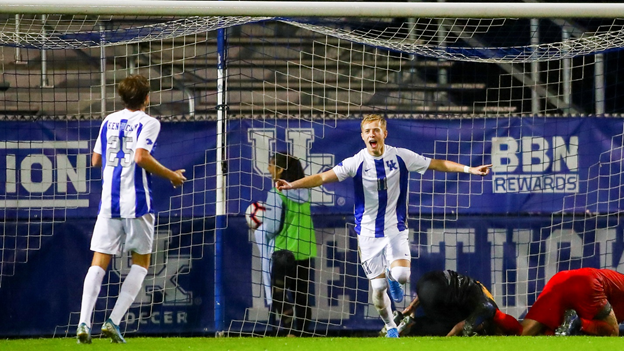 All seven goals were scored by a different Kentucky player, with three Wildcats recording the first of their respective careers. Wednesday marked Kentucky’s most goals scored in a match since an 8-0 victory against Georgetown College (Ky.) in 2006.

In the 16th minute, reigning C-USA Offensive Player of the Week Daniel Evans sparked the UK offensive momentum by scoring his seventh goal of the season and third in the last two matches off a rebound of Jansen Wilson’s shot off the crossbar.

Just over a minute later, the Wildcats were given another opportunity after Marcel Meinzer was fouled by David Viscosi in the Wright State box. Meinzer attempted the ensuing penalty kick, connecting on the first goal of his career.

Stefan Rokvic attempted the Raiders’ lone shot of the first half 25 seconds later, scoring Wright State’s only goal via an assist from Deri Corfe in the 18th minute.

Defender Aimé Mabika scored next for the Cats, netting his first goal since a brace in Kentucky’s season opener by way of a corner kick from Meinzer in the 28th minute.

Former Clemson transfer Mason Visconti scored his first goal in a UK uniform in the 33rd minute, assisted by Evans. The score remained 4-1 for the rest of the half.

In the second period, Wilson made another appearance on the box score with the first goal of his career in the 65th minute off the foot of Colin Innes.

Just 23 seconds after his first assist of the season, Innes’ display of fancy footwork created enough space to fire the ball into the upper-right corner of the net for an unassisted goal of his own.

After another foul in the box by Wright State charged to defender Alex Hummel, Elijah Borneo scored in the 72nd minute on the subsequent penalty kick for the first goal of his career.

Kentucky outshot the Raiders 17-6 overall and 8-3 on target, evening the all-time head-to-head series between the schools at 3-3-3.