No. 16 Kentucky, No. 4 Indiana Play to Scoreless Tie in Bloomington 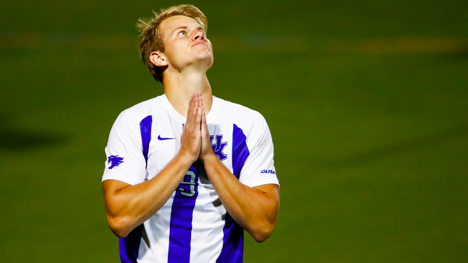 Wednesday marked the first draw in the head-to-head series between UK and IU since 2010 and the first such occurrence in Bloomington since 2008.

UK goalkeeper Enrique Facusse earned a shutout against the Hoosiers for the second year in a row and for the fifth consecutive time of his junior campaign, adding to the Wildcats’ league-leading collection of six clean sheets overall. Indiana, like Kentucky, was shut out offensively for the second time this season.

Despite a scoreless result, Wednesday’s match featured plenty of action from both sides. An exceptionally physical struggle led Kentucky, which averaged 12.6 fouls per match heading into the night, to commit a season-high 21 infractions.

Kentucky led the shot count 14-12, attempting five in the first 10 minutes of overtime. Sophomore Brock Lindow, who received the second starting nod of his career after scoring the game-winning goal last Saturday at ETSU, shined once again with two shots on target off four attempts in a career-high 97 minutes.

The Cats will resume conference play on Sunday, taking on the undefeated No. 15 FIU Panthers (8-0-3, 3-0 C-USA) in a 6 p.m. ET kickoff at Wendell & Vickie Bell Soccer Complex. Kentucky’s ongoing eight-match unbeaten streak versus C-USA opponents began after a 3-2 loss at FIU last season.