No. 17 Kentucky, No. 11 Xavier Play to Draw for Third Straight Season 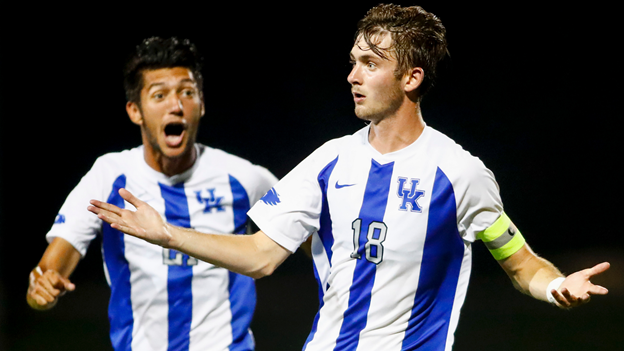 Offensively, Daniel Evans and Bailey Rouse set the momentum with one goal apiece in the second half of the 14th all-time meeting between the two schools.

In the first half, neither team attempted a shot until Kentucky’s Kalil ElMedkhar let one fly at the 30-minute mark, leading to an additional three attempts from the Wildcats before intermission.

It was the Musketeers’ lone first-half shot in the 44th minute, however, that gave Xavier a 1-0 lead prior to the break. Derrick Otim scored when the ball reflected off the inside of the right post and landed safely in the left side of the net.

In the second half, Xavier’s Karsen Henderlong scored in the 56th minute after UK goalkeeper Enrique Facusse saved the freshman’s first attempt, pushing the lead to 2-0.

In response, Kentucky’s Daniel Evans scored in the 58th minute off the foot of ElMedkhar, closing the gap to a 2-1 deficit.

When Marcel Meinzer sent in a corner kick in the 67th minute, freshman Brandon McManus found Bailey Rouse in front of the net, where Rouse finished the play with a flick of his heel. The Colorado native’s first goal of his junior campaign tied the match at 2, where the score would remain deadlocked for the remaining 43 minutes.

Wednesday marked the third straight tie between Kentucky and Xavier in as many seasons.

The Cats will travel to No. 12 Charlotte on Sunday for a 3 p.m. ET kickoff at Transamerica Field.