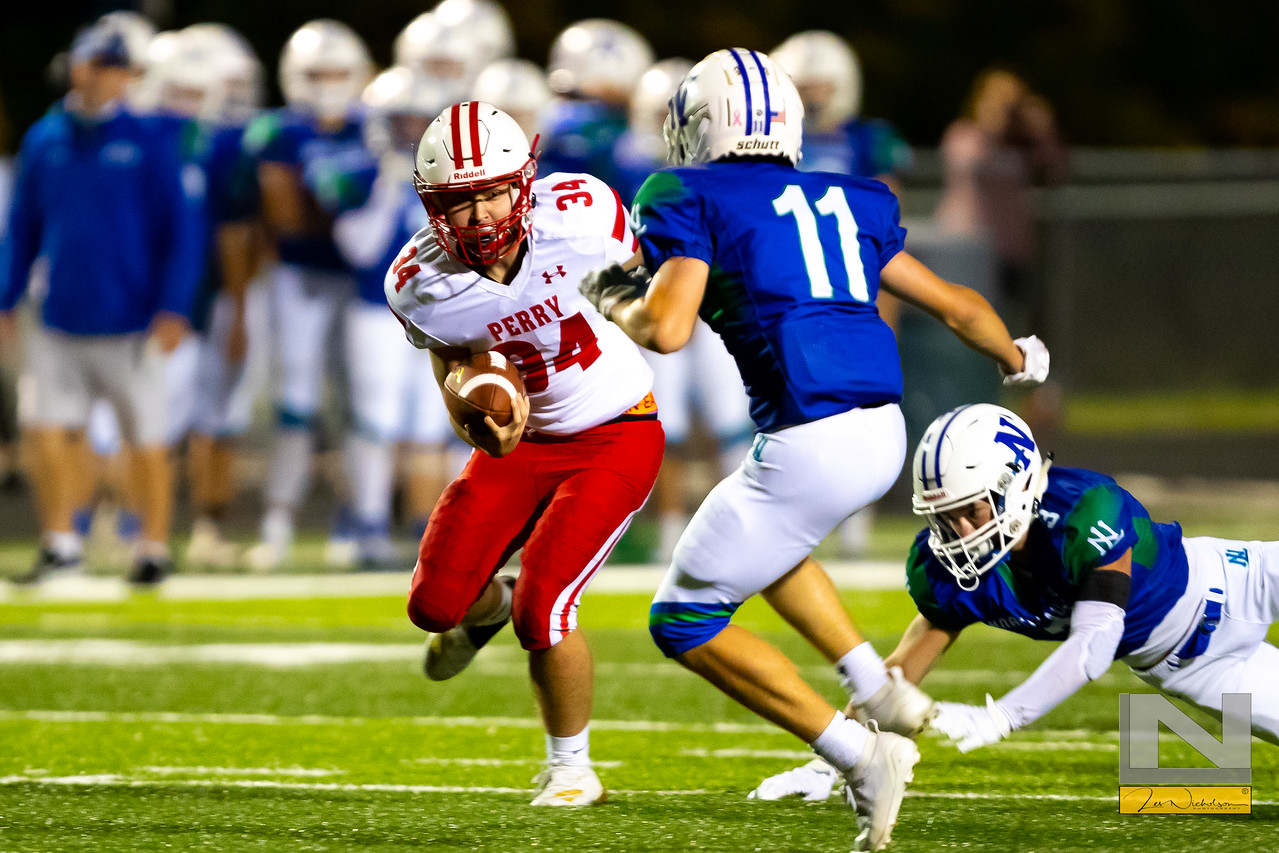 Perry Central opened road play of the 2020 season as the Commodores traveled down the Hal Rogers to take on the against the North Laurel Jaguars in London.  The Commodores opened the season with an emotional victory over Pike Central, in Coach Mark Dixon’s debut as the head coach of Perry Central.  The Commodore fan base and players were extremely optimistic entering tonight’s contest against the Jaguars and had hoped to build on the momentum created in the opening week win.  North Laurel is one of the largest schools in the Area, being a 5A school and Perry Central knew entering the game the competition they would face would be a challenge.

A couple of years ago Perry County Central was coached by legendary coach Tom Larkey.   Tom Larkey has since retired, but his coaching legacy is followed by his son Chris T. Larkey who is the current head coach of North Laurel.  A few years ago, Bluegrass Sports Nation was present when Coach Tom Larkey reached a major milestone in his coaching career, reaching the 300-win milestone.  Coach Larkey’s family including his son Chris Larkey were present at the game as his father and team celebrated the major coaching milestone at mid-field.  Chris Larkey is very familiar with the Commodore Football program, many Senior Commodore Football players once played for his father Tom Larkey.

Perry Central struggled to move the ball in the first quarter and was routinely faced with three and out possessions.  The defense of the Jaguars got into the backfield and often forced both Perry County Quarterbacks into either taking a sack or forced to make a rushed decision.  North Laurel who is known as a team that likes to put the ball in the air, changed their offensive approach and used a combination of backs to routinely move the chains and create first downs.  Running backs Tucker Warren and Connor Bowling had success running the ball and often got into the Commodore secondary line of defense.  Perry Central had trouble stopping the ball, and offensively the Commodores were unable to move the chains.  At the end of the first quarter North Laurel had a comfortable lead of 16-0 over Perry Central.

The game continued to get worse for the Commodore Football team in the second quarter.  Offensively the Commodores continued to struggle to convert First Downs and defensively Perry could not stop the run.  North Laurel’s Warren continued to find wholes in the secondary and rushed the ball for several first downs, moving the chains.  North Laurel added another touchdown near the end of the half when Tucker Robinson scored on a twenty-two-yard rushing touchdown.  Perry County continued to struggle on the next offensive possession, turning the ball over and giving the Jaguars good field position on the final drive of the half.  North Laurel finished the drive with another rushing touchdown with RB Warren rushing the ball for another Jaguar Touchdown, the JAGS also converted on a 2Pt conversion.  At the end of the half North Laurel led Perry County Central 32-0.

In the first half the stat that really stood out is the difference in Offensive Yardage between the two teams.  According to WVAN Radio 96.5 FM, who called the game over the radio, Perry Central only had forty-one yards of offense in the first half.  Thirteen yards passing between QB’s Charles Mullins and Chance McKenzie on eight completed passes between the two and twenty-nine rushing yards between the combination of running backs.  North Laurel alone had one hundred and twenty- nine rushing yards with many coming from Tucker Warren.

In the second half, Perry Central was out of sync and again struggled to move the chains and convert first downs.  McKenzie on the opening offensive play did find Caeden Sebastian for a big thirteen yard gain passing the ball, but other than that single play Perry struggled to move the ball.  The next play after the passing first down, Perry Central fumbled the ball on the snap the ball and was recovered by Austin Johnson of North Laurel who scooped the ball up and scored a touchdown off the Perry Central turnover.  With North Laurel up by more than thirty-five points in the second half, the rest of the game was played with a running clock.  North Laurel added another score late in the quarter when #8 Grant Woods scored the ball on a twenty-four yard rushing touchdown.  At the end of the third quarter North Laurel had a commanding lead of forty-six points.  North Laurel 46 – Perry County Central 0.

Despite the score entering the fourth quarter, the Commodores never stopped competing and never hung their heads.  Perry Central running back #34 Elijah Gayheart had several good plays rushing the ball and picked up a couple of first downs in the quarter.  For the first time all night Perry Central was in the red zone and threatening to score.  The Commodores avoided the shutout in the closing moments with QB Charles Mullins finding Wade Miller in the end zone for a two- yard passing touchdown.  The final margin was 46-7.

Perry Central drops on the season to a record of one and one.  The Season is only in week two and the team I believe will use this loss as a learning experience and come back next week refocused. Next week on September 25th, 2020 the Commodores return home to open Class 4A District 8 play hosting the Letcher County Central Cougars.