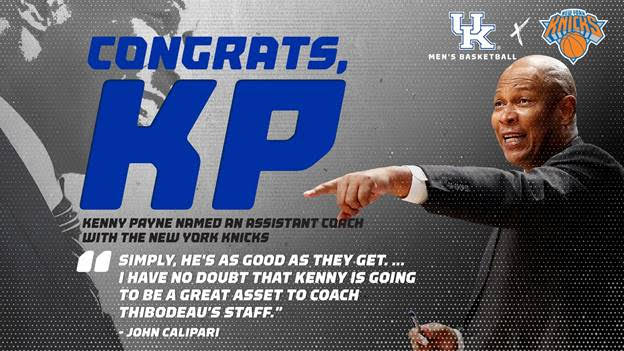 NEW YORK – Kentucky men’s basketball associate head coach Kenny Payne, regarded as one of the top assistants in the country, is leaving the college basketball ranks to join the NBA. Payne has accepted an assistant coaching position with the New York Knicks, the organization announced Tuesday.

“First of all, I want to thank Dr. Eli Capilouto, Mitch Barnhart and Coach Cal for the unbelievable opportunity I’ve had at Kentucky for the last 10 years,” Payne said. “I’ve been blessed to not only coach at the greatest program in college basketball but to be in a position to help young men grow and develop and to play a part in their families’ lives. They’ve been 10 of the most rewarding years of my life, and I’ll cherish my time in Lexington for the rest of my career.

“This decision wasn’t easy for me. I have a great job at Kentucky, and to think about leaving has been one of the hardest things I have ever done. But I have also been offered an incredible opportunity with the New York Knicks and a chance to help restore what I believe should be the premier organization in the NBA.

“Big Blue Nation, thank you for embracing me and treating me and my family with respect. You are truly the best fans in college basketball and a major ingredient to what makes UK special. I am a firm believer in Coach Cal, and any player who is talented and has the character and the mental toughness to chase his dreams should want to play for my mentor and coach.”

An immediate national search will begin for Payne’s replacement.

“This is a bittersweet day for us at Kentucky,” UK head coach John Calipari said. “Kenny has been an extremely important part of our success here. His relationship with our players is second to none. He coaches them and challenges them as hard as anyone, but they respect him, they listen to him and they learn from him because they know he cares. As a basketball coach and a teacher, he could run any program in the country. Simply, he’s as good as they get.

“I was disappointed that Kenny didn’t get that chance, but this is one of those opportunities Kenny had to look at, and I fully support his decision to join Tom Thibodeau’s staff. Kenny’s approach with his players, his knowledge of and his experience in the game, and his work ethic will serve him well on the professional level. I have high expectations for him in the NBA. For Julius Randle and Kevin Knox, it will be immediate, but as other players get to know and trust him, they’ll know he’s about one thing: their improvement and their success. I have no doubt that Kenny is going to be a great asset to Coach Thibodeau’s staff.

In 2020, he was named to the A STEP UP Assistant Coaches Hall of Fame Class of 2020 for his track record of success, outstanding and significant contributions to the game, and his high character, integrity and respect among colleagues.

“For 10 years, Kenny Payne has been a foundational piece of the success of Kentucky men’s basketball,” said Mitch Barnhart, UK Director of Athletics. “He is a great coach of fundamentals and did a superb job of developing young college players into NBA-level talent. Combine that with his ability to build relationships and mentor players, and you have an outstanding coach. I look forward to keeping up with his success.”

Payne was nationally recognized for his work with Kentucky’s big men — and rightfully so — but he played an instrumental role in UK’s success with players at every position. Most notably, Payne’s development with Anthony Davis and Karl-Anthony Towns helped the Kentucky freshmen go No. 1 overall in their respective drafts with each team advancing to the Final Four.

Nationally recognized as one of the game’s top recruiters, Payne’s ability to connect with recruits and then develop them as players flourished at Kentucky. The 2011, 2012, 2013, 2016, 2017 and 2020 classes all ranked No. 1 in the country, and every class was in the top three, according to the Recruiting Services Consensus Index. The 2013 group consisted of a record six McDonald’s All Americans and was heralded as one of the best classes ever assembled by many pundits. The 2017 class was rated as the best ever by RSCI.

UK had a player selected in the NBA Draft lottery in all nine drafts while he was at Kentucky and had multiple picked in the first round every year. Those streaks should continue with Payne’s development of 2020 NBA Draft hopefuls, including Tyrese Maxey, Immanuel Quickley and Nick Richards.

Kentucky advanced to the Final Four in four of the 10 seasons in which Payne was on staff, including in 2015, when, in his first year as an associate head coach, Payne helped guide the Wildcats to the first 38-0 record in college basketball history.

Payne’s first season as part of the Kentucky staff came during the 2010-11 season as the Wildcats advanced to the Final Four, the first in the Calipari era. UK then captured the national championship during Payne’s second season and Davis was the recipient of numerous national player of the year accolades.

Payne was instrumental in helping lead UK back to the national title game in 2014 behind the play of Randle, an All-American forward who broke freshman records in rebounding, double-doubles and free throws made.

During his tenure at Oregon, Payne helped the Ducks burst onto the national scene with two NCAA Tournament appearances in 2007 and 2008. Oregon also claimed one Pacific-10 Tournament title and three Ducks were selected in the first and second rounds of the NBA Draft under Payne.

During the 2006-07 season, the Ducks recorded an 11-7 Pac-10 record and posted an undefeated mark in nonconference regular-season games, finishing with a 29-8 overall record. That season, Oregon captured the Pac-10 Tournament, and followed the tournament run with an impressive performance at the NCAA Tournament. The Ducks earned a No. 3 seed in the tournament and advanced to the Elite Eight, where they lost to eventual champions Florida.

The Ducks followed their Elite Eight run with another appearance in the 2008 NCAA Tournament. Payne and the Oregon coaching staff then reigned in a top-20 recruiting class for the 2008 season with six highly touted recruits.

Prior to coaching, Payne traveled the globe playing basketball for 10 different professional leagues. In 1989, Payne was chosen in the first round and 19th overall in the NBA Draft, playing four years for the Philadelphia 76ers.

Payne competed in the Continental Basketball Association (Tri-Cities, Washington) and overseas in Italy, Japan, Brazil, the Philippines, Cypress, China and Argentina. He finished his professional career in 2000 following a season with Team Taipans of Cairns in Australia.

A four-year letterwinner at Louisville from 1985-89, Payne joined the Cardinals from Northeast Jones High School in Laurel, Mississippi, where he was a Parade All-American and the state’s player of the year.

Payne helped lead Louisville to the 1986 NCAA national championship as a sophomore when he appeared in 34 games and averaged 3.6 points per game. As a senior, Payne averaged 14.5 points and 5.7 rebounds and was named Second Team All-Metro Conference.

By the end of his Louisville career, Payne registered 1,083 points and shot 40% from 3-point range.

Payne earned a bachelor’s of science in sport administration from Louisville in 2003.