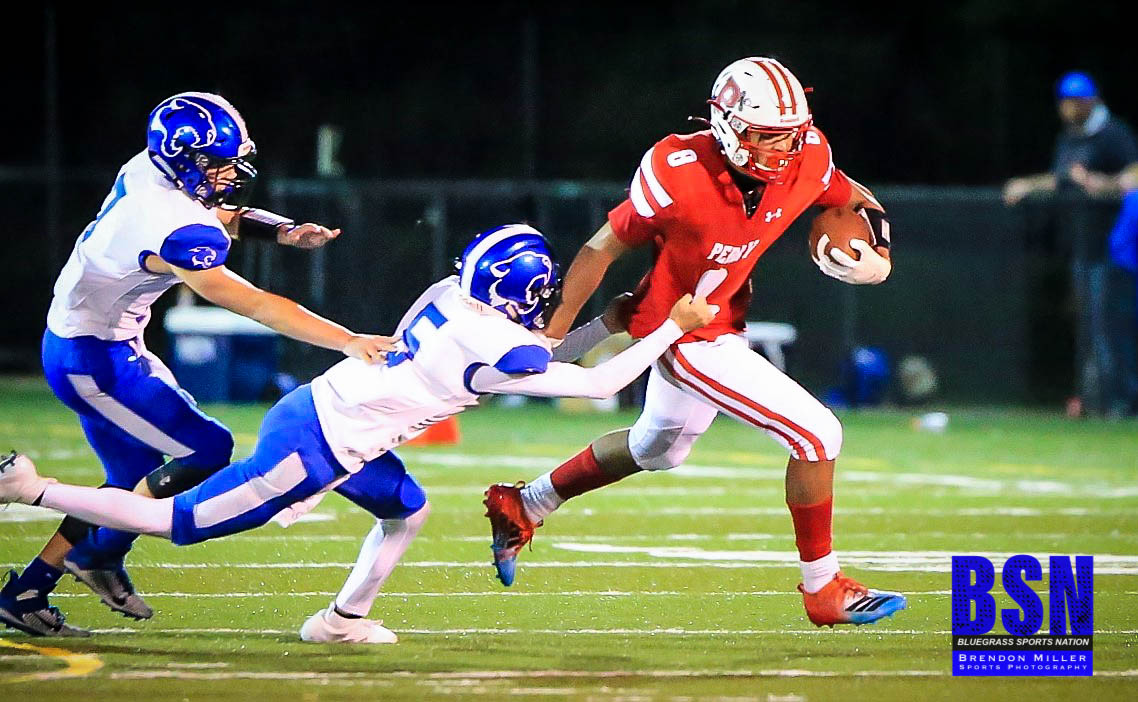 Perry Central returned to Commodore Field on Friday Night kicking off District play against the Letcher Central Cougars.  Perry Central also hosted Senior Night festivities pregame. Although, the Commodores still have three remaining home games scheduled, the uncertainty of the Covid 19 is forcing schools to move up Senior Nights.  Perry Central entered the matchup with a one and one record and returned home after being defeated 46-7 last week against North Laurel.

Letcher Central received the ball on the opening kickoff and was the first to score in the game.  Letcher Central featured a pair of dynamic running backs in #22 Hayden Brashear and #11 Isaac Mathews and a mobile Quarterback in #1 Carson Adams who can move the ball both through the air and on the ground.  The Trio of players made big plays on the offensive end.

Letcher Central began the scoring on an eighteen yard passing touchdown from QB Adams to #4 Reece Barnette.  Letcher missed the PAT attempt and led Perry 6-0 midway through the first quarter.  On the ensuing kickoff, Perry’s #13 Cade Miller nearly tied the game on a kickoff return, returning the ball for a forty yard gain and into Letcher territory.  Perry County running back #34 Elijah Gayheart also made a pair of good runs, with both being first downs and moving the chains.  Perry was unable to finish the drive with a scoring possession as the Letcher Central defense began to get in the backfield and rush the throws of QB Chanse McKenzie.

Both teams would then turn the ball over on their next possessions as Perry QB McKenzie was picked off by Letcher’s Kaden Barnett, and on the next LCC offensive possession Perry Central defense recovered a fumble forced by Freshman Linebacker Hunter Griffie.  At the end of the 1st Quarter, Letcher led 6-0.

Early in the Second Quarter Letcher scored another touchdown when Adams found #8 Sam Little who sprinted to the end zone, scoring on a thirty-one yard passing touchdown. Letcher converted the PAT attempt and led Perry 14-0.

Offensively the dual QB combo for Perry of #10 McKenzie and #19 Charles Mullins was out of sync and the Letcher Central defense put pressure on each which generated rushed throws and tackles for loss.   Perry’s Gayheart was injured in the second quarter and would not return to the game.  Letcher Central was plagued by penalties through out the night costing the Cougars both yardage and allowed Perry to maintain possession mulitple times.

Letcher Central scored once again on a run by Hayden Brashear.  Letcher converted the PAT to push their lead to 20.  The half would end with a pair of defensive penalties against Letcher that would have given the Cougars excellent field position and an opportunity to add another scoring possessions only to be neglected by roughing the kicker and being offsides.  At intermission Letcher led Perry 20-0.

In the third quarter, Perry Central came out of the half refocused and sharper offensively.  The supporters for each team got into the game and tempers flared on the field between the players.  Perry Running Back #8 Kobe Eldridge rushed the ball for several first downs, and some plays he required multiple Letcher defenders to tackle him.

Although Perry Central got in the red zone and threatened to score the Letcher Central defense held strong and stopped Perry from converting on third or fourth downs.  Another defensive penalty against Letcher gave Perry the ball inside the Letcher Central ten yard line and a new set of downs to work with.

Perry finally converted with QB #19 Charles Mullins connected with receiver #45 Mason McAlarnis for a touchdown!!  Perry converted the PAT kick and and trailed Letcher 20 -7, with some momentum.  There would not be another scoring possession in the quarter and the score entering the Fourth Quarter remained Letcher Central 20 – Perry Central 7.

Perry began the Fourth Quarter building on the momentum from the Third Quarter as players played with more confidence and tried to mount a comeback.  The Commodores defensively began to get in the backfield and apply pressure to LCC’s Adams.  Offensively Perry struggled in the fourth quarter and was only able to keep the possessions alive with Letcher Central being flagged for defensive penalties.  Perry would not score again in the game, but Letcher scored a final touchdown late in the game as QB Adams scored on a one-yard rushing touchdown with the QB keeper.  Letcher’s Brashear converted the two point coversion to set the final score at 28-7.

Perry County Central drops to 1-2 on the season.  Next week Perry Central hosts reigning Class 1A State Runner up the Paintsville Tigers on October, 2, 2020.  The game will be another tough game for the Commodores and look to get back on the winning track.