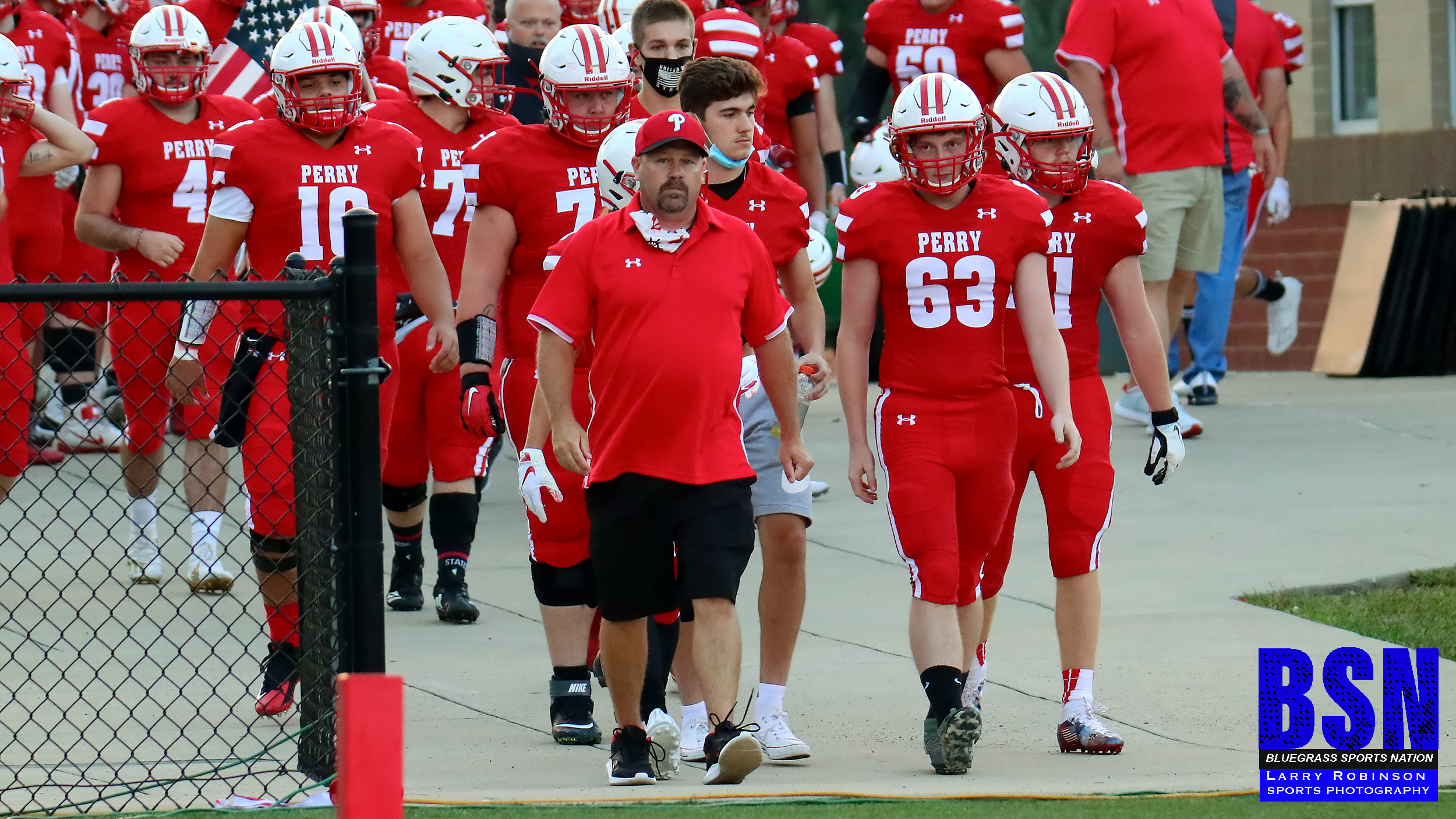 The Mark Dixon era as the head coach of the Perry County Central Commodores is officially under way.  Coach Dixon took the job as head coach earlier this year.  Before Dixon become the head coach at Perry County Central, Dixon was head coach of cross- town rivals the Hazard Bulldogs.  Dixon served several years as the coach of the Bulldogs and made Hazard into a perineal favorite in Class 1A Football.  Dixons teams while coaching Hazard where always competitive and won the Class 1A State Championship a few years back.  Dixon moved up in class as Perry Central competes in Class 4A Football and is a district opponent of defending State Champions the Johnson Central Golden Eagles.  Dixon hopes to revive a Commodore team that has struggled to get out the first round of the playoffs.  Although Perry Central has had some phenomenal players in recent years with the likes of Jayden Neace, Jacob Woolum and former UK walk on Sam Turner, competing in Class 4A has proved a challenge to the commodore team.  Dixon hops to change the culture of the Perry County Football program.

Entering tonight’s contest between Perry County Central and Pike County Central this is the first live sporting event that I have attended since the Covid 19- pandemic started in early March of this year.  Life and sporting events in general have changed during this time.  As an avid sports fan and a media member that has covered Kentucky Basketball and NASCAR, I really enjoy sports.  Tonight’s game was mandated by every single patron in the stands wearing masks, a half capacity crowd, no cheer leader’s no band and things I would have never imagined before this pandemic began.  The season was even in jeopardy of not being played at all.  Tonight’s game although, it isn’t the normal that we knew before was a welcome sign to see live football competing in a sport they love to play and gave spectators hope that one day life will return to normal before this pandemic changed our way of life.

The first quarter of the game saw each team score the ball with touchdowns.  Perry County Central was the first one on the scoreboard as QB #19 Charles Mullins connected with a passing touchdown to his favorite wide receiver target #13 Cade Miller on a twelve- yard passing touchdown.  On Pike Central’s next offensive possession, the Hawks countered with a reverse touchdown as # 7 Jonah Jett crossed the goal line.  Earlier in the quarter Jett broke loose for a massive 81- yard gain rushing touchdown, but this play was called back due to an offensive block in the back.  Jett is a super quick and a talented football player.  Perry County Central also had a play earlier in the game that should have resulted in a touchdown.  McKenzie had WR Miller in the endzone uncovered and threw the ball, Miller was unable to complete the catch on this passing attempt.  At the end of the first quarter the game is tied at seven.

In the second quarter both defenses began to assert themselves and the game become more of a defensive battle.  Although, both teams were able to score touchdowns in the quarter the defense and the hitting from line backers began to dictate the game.  The Quarter also saw several missed scoring opportunities over mistakes that will only improve as the season goes on and the teams have more time to work on team chemistry.  Perry County Central Running back Miller made a great play running the ball and scored the ball on a running play, only to be called back only to be called back due to a defender being blocked in the back.  Later in the quarter Pike Central was able to find the end zone as RB #3 Tayvion Boykins scored the ball on a one- yard rushing touchdown.  Pike Central converted on the PAT and led Perry 13 -7.  The Pike scoring possession was a seven play 83- yard drive that featured several long runs by star running back Jonah Jett including one rushing the ball for a forty- two-yard gain.  Perry Central tied the game late in the quarter as RB Miller scored the ball rushing for an eighteen- yard touchdown.  Perry Central stopped Pike Central on the hawks next offensive possession with a four and out, the defense in this possession was outstanding as Commodore defenders routinely got in the back field and delivered hard tackles for big losses.  Perry had the ball at their own five-yard line and the QB McKenzie mishandled the snap but recovered the ball in the end zone resulting in a safety.  Going into intermission Pike Central led Perry County Central 15-13.

In the third quarter the teams started the half with trading possessions, neither team could really move the ball offensively as the defensive intensity picked up on the first few possessions.  Midways through the quarter the Perry Central offense started to move the ball through both the ground and air.  One drive saw RB Miller routinely move the chains resulting in several first downs in this possession.  QB McKenzie also found his stride connecting with receivers down field many found wholes in the defensive scheme of Pike Central.  Perry marched the ball the down field and faced a third and one at the one-yard line.  QB McKenzie kept the ball for a QB keeper and scored the ball on a one-yard touchdown run.  Perry also converted the two-point conversion when McKenzie found WR #8 Kobee Eldridge in the end zone for a completed pass.  Perry regained the lead and led Pike Central 21-15.  As the quarter was ending Pike Central responded with a seven-yard rushing touchdown by QB Curt Anderson.  Pike Central also went for the two-point conversion and was successful.  At the end of the third quarter Pike Central led Perry County Central 23-21.

Going into the fourth quarter, the question that had entered my mind was if the safety resulting in two points would come back to haunt the Commodore football team.  The teams were evenly matched, and both had proved capable of responding to scoring possessions by the opposing team.  Perry Central had other plans though as the Commodores controlled the quarter scoring on multiple possessions, controlled the line of scrimmage and the defensive intensity of the Commodores picked up with Pike Central unable to move the chains.  On the very first play of the quarter McKenzie found Vincent down field in a one on one possession with the safety.  Vincent had space on the safety and completes the pass for a forty -three yard passing touchdown.  The Commodores are also able to convert on the two- point conversion. Perry regained the lead and led 29-23.  The defense mentioned earlier in paragraph really stepped up on the next possessions limiting the Hawks going four and out and unable to move the chains.  The Commodores again find the end zone when QB McKenzie scored the final points of the game on another two- yard QB keeper, rushing the ball for a two-yard touchdown.  Perry also converted another two- point conversion.  Perry County Central goes on to defeat the Pike Central Hawks 37- 23.

In Mark Dixon’s first game as the coach of the Commodores, Perry County Central wins a hard-fought battle against a talented Pike Central Team.  Hopefully, the win serves as a boost to the Perry Central Football program and begins to change the culture and create optimism for a brighter future for the student athletes, the fans, parents, and school in general.  Tonight’s win was a big win for the Commodore football program and one that I see being a regular occurrence.  Next up for the Commodore football team is an away game with the North Laurel Jaguars next Friday September 18,2020 in London, KY.