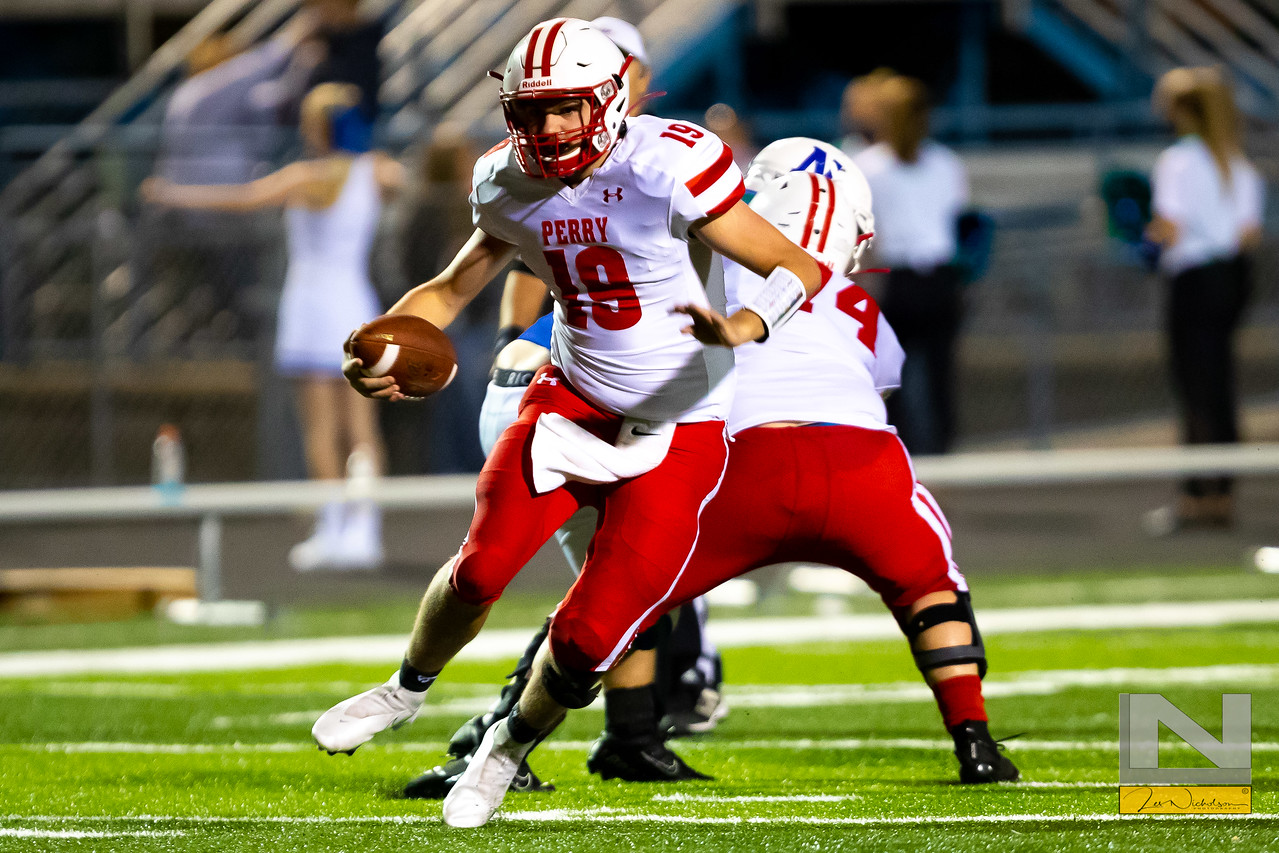 Caeden Sebastian with four interceptions bringing two back for Touchdowns

Perry County Central returned to the field for a district matchup against the Clay County Tigers.  Coming into the game Perry County Central was on a four-game losing skid, and Clay County entered the contest with a three and two record. Tonight, the story of the game was the play of the Perry County defense and in particularly #18 DB Caeden Sebastian.  Sebastian finished the game with a total of four interceptions and two of the interceptions resulted in scoring possessions on two pick six plays.  Sebastian was phenomenal tonight and the best he has played all year.

In the first quarter Clay County got the ball on the kickoff.  Clay County relies on throwing the ball to move the ball and Tiger QB Tate Rice looked to torch the Commodores through the Air.  Not long into the game Tate snapped the ball and threw downfield, Perry Defensive Back Sebastian picked off the throw and had room to run. Sebastian returned the ball with a scoring possession, resulting in a pick six off the interception.  Perry County Converted on the PAT and led Clay County 7-0.  On Clay County’s next offensive possession, the Tigers again throw an interception being picked by Sebastian.  Offensively Perry Central had trouble moving the ball consistently although RB Cade Miller ran the ball hard and picked up a first down.  Perry Central first offensive possession resulted in a punt.  Clay County’s third offensive possession was much more productive and resulted in a Touchdown pass from Rice to #4 Connor Farmer.  Clay County converted the 2PT conversion and led Perry Central 8-7 at the end of the first quarter.

In the second quarter the Tigers had the ball and again looked to throw downfield.  Perry’s Sebastian again picks up the intersection and once again Sebastian returns the ball to the end zone scoring another pick six.  Perry regained the lead and led Clay County 14-8.  Perry limited Clay County into punting the ball.  Offensively the Commodores began to find their stride and RB Cade Miller found the endzone on an impressive forty- yard screen play from Charles Mullins.  Perry led Clay County 20 -8.  Clay County settled down offensively and cut the lead with a passing touchdown from Rice to #5 Zach Saylor, Clay also converted on the 2Pt conversion.   The half would end with Perry Central leading Clay County 20- 16.

Perry Central had the ball on the kickoff to open the third quarter.  Perry Central relied on the running game to move the chains, and RB Cade Miller and Kobe Eldridge continuously moved the chains on the Commodore opening possession.  Miller picked up multiple first downs rushing the ball and took the ball into the RedZone but was unable to finish the drive with a scoring possession.  Perry faced a third and goal at the two- yard line, gave Kobe Eldridge the ball and Eldridge finished the drive with a rushing touchdown.  Perry Central led Clay County 26-16.  The Perry County Central defense steps up again and forced Clay County into a fumble, with the ball being recovered by Cade Miller.  Miller continued to run the ball hard and again set the Commodore offense up in the RedZone.  The drive was finished by Miller scoring a rushing touchdown.  Perry led Clay County by sixteen points with the score Perry County Central 32- Clay County 16.  Clay County would get going offensively and the Tigers were able to move the ball and score on another passing play from Rice to Farmer.  Clay also converted on the 2 Pt conversion and trailed Perry 32- 24 at the end of the third quarter.

Clay County had the ball to open the fourth quarter and most of the opening minutes.  Clay County converted on a fourth down, crossed midfield and was moving the ball, until Perry Central defense again stepped up and forced another fourth down.  This time the Commodore defense stopped Clay County on fourth down and got the ball back.  Perry’s Miller ran the ball hard and picked up a couple of first downs and forced Clay County to use timeouts.  Ultimately Perry had to punt the ball, but with only two minutes remaining in the game the Tigers needed to drive the ball eighty yards and no timeouts to score the ball.  Clay County tried to make up yards through the air and once again the ball was picked off by Sebastian.  Sebastian’s interception ultimately sealed the win, and the Commodores prevail with an eight-point victory, defeating Clay County 32-24.

Perry Central improved on the season with a record of two wins and four loses.  Tonight’s win is Perry Central’s first win since the opening week, when they defeated a good Pike Central team 37-23.  Hopefully, tonight’s win serves as a boost and helps the Commodores restore confidence in their team and season.  Perry Central is now 1 and 2 in Class 4A District 8 competition.  Next week Perry County Central returns home to host the Harlan County Black Bears in another district matchup.