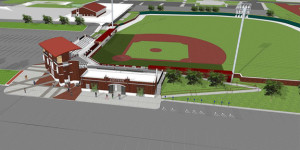 RICHMOND, Ky. – Construction and renovation on the Eastern Kentucky University baseball and softball facilities has begun.

The baseball and softball projects are expected to be completed in March. Athletic facility renovations and expansions are funded through agency bonds sold in 2015. 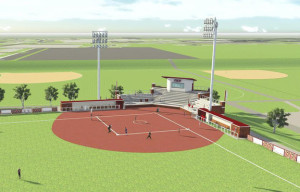 As part of a widespread improvement to athletic facilities across the Eastern Kentucky campus, the designs are intended to blend with the original campus architecture, while creating modern sports facilities, which will add to both the student-athlete and fan experience.

These newly renovated facilities will also serve the local and regional communities. Modern facilities like these will attract events such as high school tournaments, club tournaments and camps, bringing many prospective students to EKU’s campus each year.

The transforming renovations will include new team locker rooms, indoor hitting facilities and office space for coaches. In addition, new team dugouts and climate controlled press boxes, which will accommodate enhanced radio and video broadcasts, will be added. Both facilities will feature banners celebrating the accomplishment of former and current Colonel student-athletes.

The indoor hitting facilities will provide the teams with an area to practice during any weather conditions.

The baseball facility will add a new grandstand featuring a brick façade and more than 900 seats, including 429 chair back seats, along with handicap-accessible seating and a new concession area equipped with restrooms. Also being added is an entry plaza for pregame gatherings. A canopy will provide coverage for fans in the stands, and improve the pitcher’s view of home plate.

“We are thrilled with the upgrade of our baseball facilities,” EKU Head Baseball Coach Edwin Thompson said. “This is going to benefit the student-athlete experience for our current and future players. The development of players and the fan experience will be greatly impacted as well. We are grateful for the leadership from President Michael Benson and Director of Athletics Stephen Lochmueller to help enhance the vision of our baseball program.”

Meanwhile, the EKU softball facility will feature improved field drainage at the dugouts and enhanced outfield decks ideal for informal gatherings. The newly renovated grandstand will also feature a brick façade and accommodate more than 400 spectators.

“Our new facility is going to be a game changer,” EKU Softball Head Coach Jane Worthington said. “Not only will it positively impact our recruiting process, but it will also allow us to have more efficient and effective practices. We are fortunate to have the support from President Benson, Director of Athletics Stephen Lochmueller, as well as other administrators. I am excited to watch the building proceed and eventually see the final project.”

The new baseball stadium will be named in honor of Hall of Famer Earle Combs. While a student at Eastern Kentucky, through persuasion of his friends and the students who saw him hit two home runs against the faculty in a practice game, he decided to go out for the Eastern team. He immediately became a member of the team and a hero to the students, slamming at least one home run in every game he played and compiling a .596 batting average that first year.

Combs played for the New York Yankees from 1924-35, compiling a lifetime batting average of .325. He was the leadoff hitter for the great “Murderer’s Row” Yankee teams. He was inducted into the Hall of Fame at Cooperstown, New York, July 26, 1970.

Combs also served as Chairman of EKU’s Board of Regents.

EKUSports will soon launch a new web page – www.EKUSportsBuilds.com – devoted to multiple upcoming facility projects on the athletics campus. The site will include live cams, video interviews, images and information on giving to the projects.