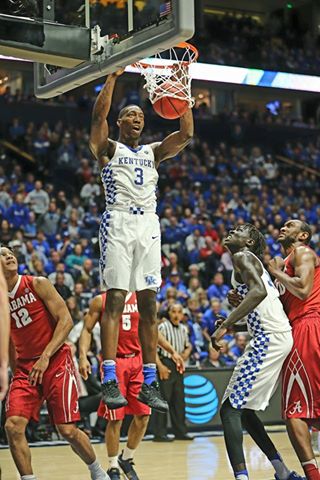 Bam with the Jam vs AlaBAMa – Phot by Brendon Miller

By Ricky Blair
Nashville, TN – In the semi-final round of the SEC tournament, Kentucky got off to a rocky start as Alabama took an early 9-2 lead.  The Wildcats had four turnovers and only one basket in the first four minutes of play.  Sophomore guard Isaiah Briscoe had two fouls less than three minutes into the game and had to take a seat on the bench, which didn’t help.

Kentucky finally righted the ship, when Dominique Hawkins made a steal and layup.  That play gave the Wildcats their first lead of the game at 18-17 with 9:41 to go in the first half.  The Hawkins basket capped an 11-0 run for the Wildcats.  Kentucky then went up by as many as seven.  Their run was led mainly by the hot shooting of Malik Monk who finished the half with 13 points.  The Cats hit a cold spell down the stretch, as they did not score a basket in the final 3:18 of the half.  Despite the drought at the end, the Wildcats still led at the half 33-32.

Kentucky continued to struggle as the second half began, when they went another 2:41 without scoring.  That was a total of six straight minutes without a point.   During that dry spell, Alabama took advantage of the cold shooting and took a three-point lead. The Cats finally got off the 33-point mark when Briscoe made a pair of free throws to cut the Alabama lead to one.

Just like in the first half, the Wildcats finally got going and went up by nine with 11:24 to go in the game.  Again Alabama made a charge and cut the lead to one, after Kentucky’s Isaiah Briscoe was charged with a flagrant foul.  This foul allowed Bama’s junior forward Riley Norris to make two free throws, plus Alabama regained possession of the ball because of the flagrant foul call.  On the ensuing play Norris was fouled again.  This time he only made one out of two free throws, which set the score at 58-57.  There was only 6:49 to go in the game when all of this activity took place.

Even though the momentum had clearly shifted to the Crimson Tide, a determined group of Wildcats were not going to be denied.  The game was close through out the final minutes, but Alabama turned it into a free throw shooting contest in the last two minutes as they continually put the Wildcats at the line in hopes of a comeback.  The comeback was not going to be, because Kentucky consistently made their free throws, which allowed them to walk out with a 79-74 win.   The Cats made 27 of 39 from the line during the game, many of them in the final minutes.

The win is the tenth in a row for Kentucky and now improves their record to 28-5 on the season.

The Wildcats will play the winner of Vanderbilt and Arkansas for the 2017 SEC Tournament championship.