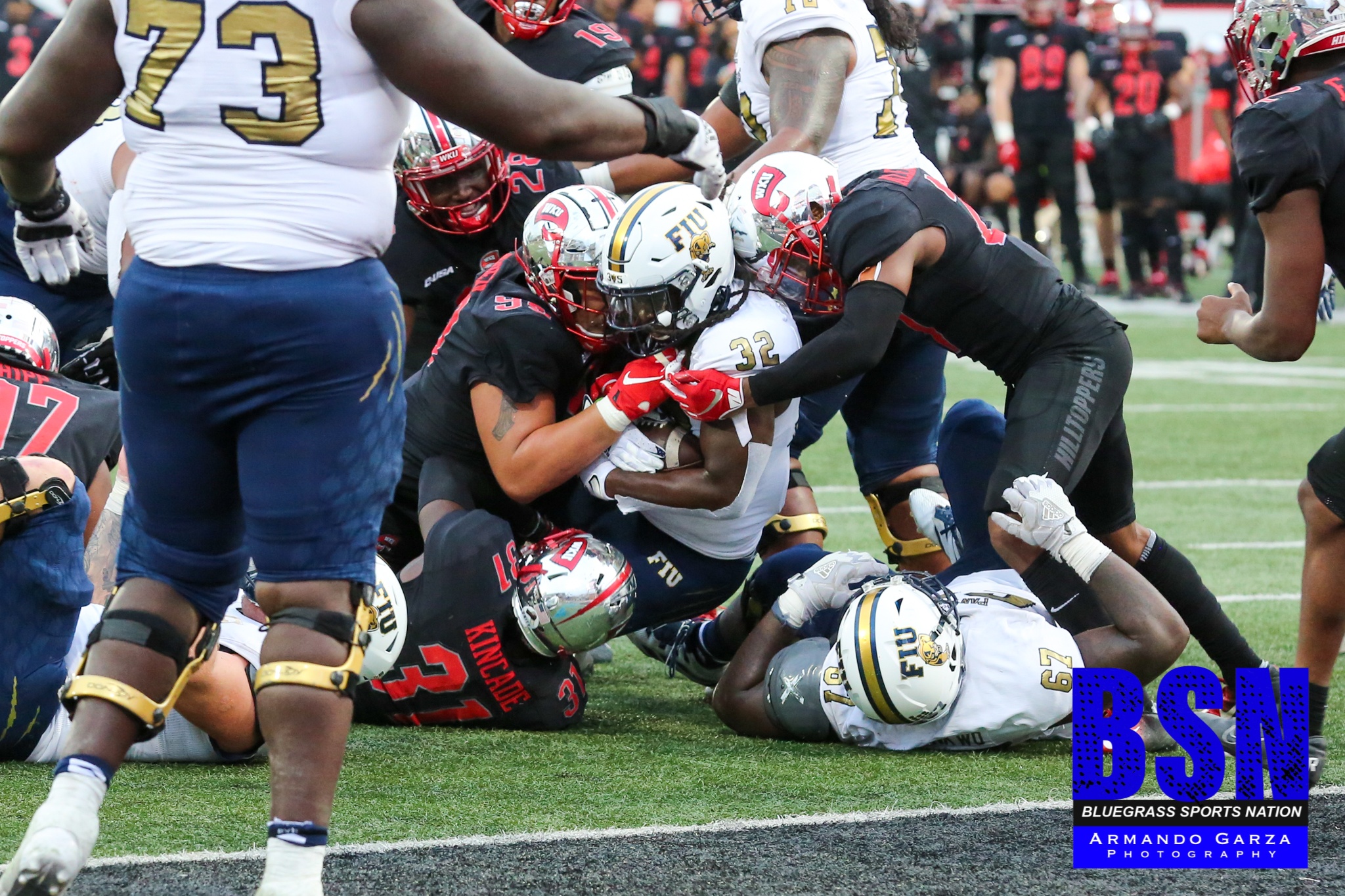 WKU rattled off 35 unanswered points on Saturday afternoon’s senior day game against the FIU Panthers. The Hilltoppers recorded two defensive touchdowns in the third quarter and finished the game with 38 points, their highest point total all season.

The squads exchanged drives for the first three minutes of the contest. FIU was the first to the board with a 28-yard touchdown pass. Defensive tackle Jeremy Darvin made a big defensive stop at the end of the first quarter with an 8-yard sack.

In the Hilltopper’s first drive of the second quarter, kicker Brayden Narveson recorded his 10th field goal of the season to cut the FIU lead to 7-3. FIU immediately returned WKU’s kickoff for a 100-yard touchdown. The Panther kicker missed the FIU extra point, making the score 13-3.

Beginning at the 3:54 mark, WKU recorded an eight-play, 65-yard drive, capped by a 1-yard rushing touchdown from quarterback Tyrrell Pigrome. With a score of 13-10, advantage Panthers, WKU was able to stop FIU from finding the scoreboard again, complete with a sack from Ricky Barber heading into halftime.

WKU opened the second half with electric defense. The Hilltoppers forced the Panthers to go 3 & out at first. In the next FIU drive, DeAngelo Malone forced a fumble. The turnover was scooped up by Roger Cray who ran it back for 19 yards, giving WKU its first lead of the game at 17-13. The score marked the Hilltoppers first defensive touchdown of the 2020 season.

After Cory Munson pinned a 60-yard kickoff, FIU’s quarterback threw an interception to Eli Brown. He returned the pick 22 yards to extend the brand new WKU lead to 24-13 with nine minutes remaining in the quarter.
The WKU defense continued to lock in, forcing the Panthers to turn the ball over on downs, including a fourth down sack by redshirt sophomore Nick Days.

The Hilltoppers took over and charged down the field as Gaej Walker strung together a 54-yard rush, 4-yard rush and 1-yard rush to find the endzone and take the WKU lead to 31-13 with just 14 minutes remaining.

For three consecutive FIU drives, the WKU defense forced turnovers on downs, including a pass breakup by Antwon Kincade in the second and all-around pass coverage on the third. The Panthers would eventually find the endzone as time expired, making the final score 38-21 in favor of the Hilltoppers.

Devon Key, Eli Brown and Kincade led the defense on senior day with 10 tackles coming from both Key and Kincade while Brown recorded eight tackles and three TFLs. On the offensive side of the ball, Gaej Walker had 127 rushing yards, his first 100-yard rushing game of the season. On special teams, punter John Haggerty notched a career high 426 punting yards with eight total punts and four inside the 20-yard line.

WKU is slated to close out the regular season against Charlotte.