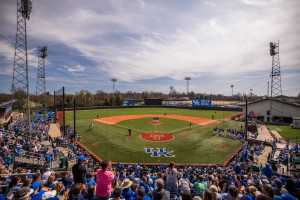 LEXINGTON, Ky. – Kentucky will stage its first baseball postseason games since 2006 this week after being selected one of 16 schools to host the NCAA Tournament Regional round, it was announced Sunday night. The games will take place Friday, June 2, to Monday, June 5, at Cliff Hagan Stadium.

It will be just the second time the program hosts the four-team regional bracket. The other three teams that will make their way to Lexington will be announced Monday at noon during the NCAA Baseball Championship Selection Show. The Wildcats also will find out whether they are one of the eight national seeds who would host a Super Regional should they advance past the regional round.