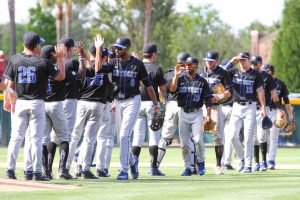 Baseball America tabs the class No. 9 overall, second-highest ever for program
LEXINGTON, Ky. – Kentucky’s 2017 recruiting class was ranked No. 9 in the country by Baseball America, it was announced Tuesday. The lofty ranking is the second-highest ever for the program by the respected publication and comes on the heels of the Wildcats finishing the 2017 season in the top 10 of the national polls after advancing to their first-ever Super Regional.

The class is the first full one for the current coaching staff headed by Nick Mingione and only the 2008 class, which was ranked No. 4, has been rated higher by Baseball America. The Wildcats’ class also was ranked No. 7 nationally by Perfect Game, which doesn’t take into account junior college signings in its rankings.

“This is a banner class for our program moving forward and very much needed after we had eight total draft picks and a program record six Top 10-round draft picks selected in the 2017 MLB Draft,” Mingione said. “The 2017 class has a very strong foundation that sets us up for future success.”

The Cats signed 16 high school prospects, all of whom were All-Americans and ranked in their home state’s Top 20 players. Eight freshmen were among the Top 500 recruits nationally and nine were Top 100 at their position, including New Jersey Gatorade High School State Player of the Year Brad Dobzanski, a right-handed pitcher selected in the 39th round of the 2017 MLB Draft.

Additionally, the Cats signed nine junior college players, eight of whom were rated among the Top 150 JuCo players nationally. Two were Defensive Players of the Year and two were JuCo All-Americans.

“We feel we have the No. 1 junior college class on campus in the country,” Mingione said. “These guys all had major impacts on their programs before coming to Kentucky, with six players playing in the NJCAA World Series. The nine players we signed all have been a combination of an All-Conference award winner, Gold Glove winner, All-American, played in the World Series, were named World Series All-Tournament, were a World Series champion, all of which are parts of bringing winning players into our program.”

The staff has executed an inside-out recruiting approach that starts in the Commonwealth but the Kentucky brand has extended to all parts of the country. Fifteen different states are represented in the Class of 2017, including the likes of Utah, Arizona, Minnesota, Texas, Massachusetts and Delaware.