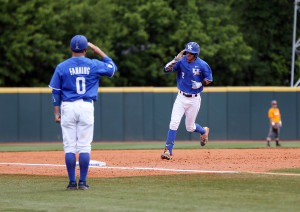 The University of Kentucky baseball team beats Tennessee on Saturday, May 13, 2017, at the Cliff.
Photo by Britney Howard

LEXINGTON, Ky. – Riley Mahan continued his assault on Southeastern Conference pitching over the past two weeks, belting two home runs to lead No. 8 Kentucky to an 8-3 victory over Tennessee on Senior Day at Cliff Hagan Stadium. The Wildcats will go for a series sweep on Sunday afternoon as they continue to hunt the SEC crown.

Mahan crushed a pair of home runs to right field, the second of which traveled 436 feet and easily cleared the deck in right-center field. With the two round-trippers Mahan now has homered in four straight league games, with five bombs total in those games. The junior infielder is 6-for-8 with a double, three home runs, five runs scored and six RBI in the two games against the Volunteers.

The Cats (35-16, 17-9 SEC) again jumped on the Vols (26-21, 7-17) early with Evan White’s two-run home run in the second inning and a four-run third that gave them a 6-1 lead. With starter Zach Logue fighting himself a bit on the mound, freshman Chris Machamer came on in relief and pitched 4.1 perfect innings to earn his first collegiate victory.

Before the game the program honored seven seniors – LHP Colton Cleary, OF Marcus Carson, IF Connor Heady, 1B Gunnar McNeill, OF Zach Reks, LHP Logan Salow and OF Storm Wilson – on Senior Day. The mother of each player took part in throwing out the ceremonial first pitches in recognition of Mother’s Day.

o   He now has home runs in four of the past five games and five in the past four SEC games.

o   White has 22 multi-hit games this season and 66 for his career.

o   White now has four game-winning RBI this season and seven for his career.

o   He has reached base safely in 22 straight games.

o   Reks now has 20 multi-hit games this season and 31 for his career.

o   Squires now has multiple hits in four of his past five games.